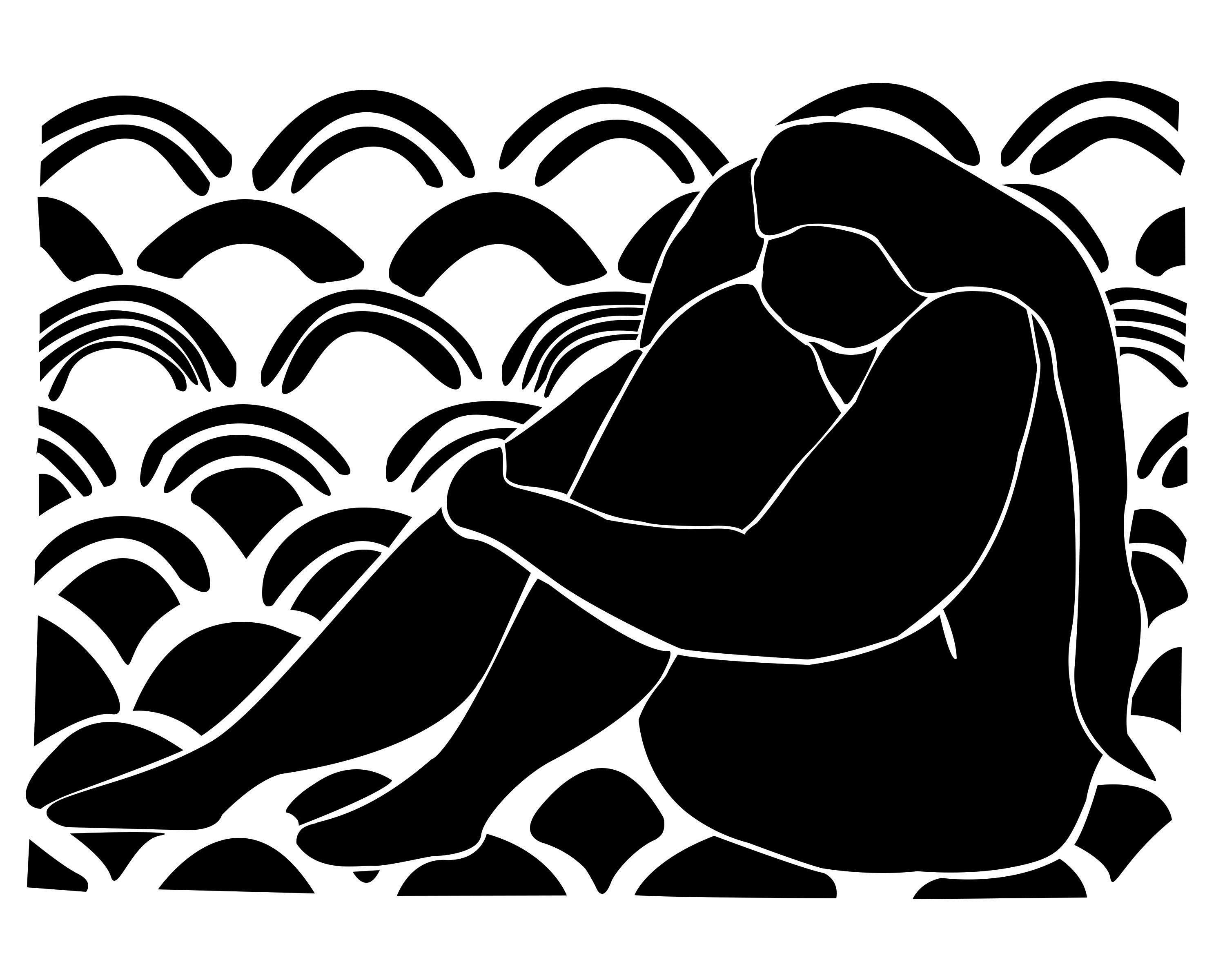 The last time I saw Charles Ferruzza, The Pitch’s long-time former restaurant critic, he gave me some advice. “Stay thin,” he said, in the low, conspiratorial voice one might use to say “the bouillabaisse is poisoned” or “beware the Babadook.”

I knew he was thinking about health—he’d dealt with more than his share of medical problems and wanted to spare me the pain. But I was thinking about the Frisbee-sized chocolate chip cookie I’d just eaten and the skinny jeans embossing a seam pattern into my thighs.

It’s hard to avoid comments about weight when you’re a semi-professional eater. When I tell people I’m a restaurant critic, I get a lot of fatphobic variations of “If I did that, I’d weigh 300 pounds.” The “300 pounds” is ostensibly a joke, the punch line the hyperbole of it all—300 pounds! Me! Can you imagine?

Laced into the subjunctive mood is the implication that our bodies are fragile, that any change in circumstance or lapse in vigilance could dramatically alter them. Like, say, a global pandemic.

When COVID-19 made landfall—hurricane metaphors seem appropriate here—nearly everyone’s routines were disrupted in some way. We may not have been eating in restaurants, but many of us were eating (and drinking) more than usual. For my part, I started eating handfuls of chocolate chips from a bright red, pillow-sized bag while staring out the window like a passenger on a halted train. My nightly cocktail became plural. I worked out when I wanted to, which was almost never.

“Shame is not a good motivator. So many people have a history with working out as a shaming thing. It’s hard for some to have a positive movement experience.”

And as if through a trick of targeted advertising, my social media feeds seemed to proliferate overnight with guilt-soaked memes about gaining (or avoiding) the “COVID 19.”

“People have this deep-rooted fear of weight gain, and that’s coming through in the Twitter jokes and memes,” says Cara Harbstreet, a registered dietitian. “And it’s perpetuated by a lot of really influential voices, too, which is creating additional stress.”

Harbstreet owns Street Smart Nutrition, a business that takes a “non-diet” approach to health. That approach was a natural extension of her time as an athlete and sports nutritionist, where she was exposed to disordered eating and a singular focus on the number on the scale. And those hang-ups, she says, can be counterproductive. “Chronic dieting rarely leads to healthy outcomes in the long term. And when diets fail, other healthy behaviors—exercise, sleep hygiene—tend to fall by the wayside as well.”

Lauren Thompson, owner and instructor at Thrive Pilates & Movement Studio on the Westside, agrees. “Everybody is doing some emotional eating right now, and that’s OK. We live in an extraordinary time. I think if you start shaming yourself for the eating, that makes it less likely that you’re going to engage in other healthy behaviors.”

Thompson deliberately avoids talking about weight loss in her studio. Before opening Thrive in 2015, she worked as a licensed professional counselor and also interned at an eating disorder recovery house. She says the weight jokes and memes that have been circulating during the COVID-19 crisis aren’t likely to create healthy habits.

“Shame is not a good motivator. So many people have a history with working out as a shaming thing: You’re not good enough as you are right now, we need to change you. So it’s really hard for some people to have a positive movement experience.”

How, then, do we take care of ourselves without falling into those traps? What does it even mean to make “healthy choices” in the middle of a pandemic when our set of choices has winnowed so drastically? I asked Harbstreet, Thompson, and yoga instructor Jill Gillespie for some practical, shame-free advice on how to think about health in the middle of a health crisis.

You don’t have to be a “body positivity” proponent to treat your body well.

If you’re struggling with body positivity, you’re not alone. For years, I’ve had an OK for thee but not for me attitude toward self-love. I’d cheer on my friends and their bodies over drinks, then go home and appraise my own in the mirror like a stern antiques dealer.

As long as thinness offers access to social capital, we’re going to feel some pressure, whether internal or external, to look a certain way. Instead of stewing in meta-guilt, Gillespie recommends aiming for “body neutrality” instead.

“Body-neutral statements are just accepting that your body is doing everything that it can to keep you alive,” she says. “And that any time you’re struggling with food or feel like you’re failing a diet, it’s because your body is trying to fight the restriction. It’s about getting to that baseline acknowledgment that you’re not a bad person for not being good at diets.”

Eating is not a sin, and workouts aren’t plenary indulgences. Thompson encourages her clients to find ways to move that they find joyful and rewarding on their own—not as compensation for what they ate that day. To avoid that trap, she follows three “rules” when mapping out her own movement regimen.

“It has to be either mindfulness-based, it has to be outside, or it has to be with other people,” she says. “One of those three has to happen. For example, I’m never going to go run on a treadmill by myself. I’ve learned that if I’m in that mode, then I’m probably using exercise as a punishment.”

Many of us are eating at restaurants less, but that doesn’t mean we’ve all transformed into stock photos of women eating salads. Grocery shopping has changed for a lot of people, too, with packaged and processed foods filling a greater share of our cart than fresh produce. Harbstreet says that’s OK. For those in lockdown or trying to minimize grocery trips, she notes, shelf-stable foods might be the better option—and they might also be more budget-friendly.

“The biggest advice I can offer,” Harbstreet says, “is the grace and permission to step back if it seems completely overwhelming to maintain a fitness routine, or if your cravings are leaning you toward comfort foods or familiar foods from your childhood. There will be a time and a place when you can return your focus back to health, and that’s for you and you alone to decide.”

Don’t optimize yourself into a corner.

Fitness magazines and websites are filled with articles about the “right” time to exercise—can you lift more weight in the morning or the evening?—but Gillespie advises choosing a movement regimen that “actually aligns with your personality” and the time of day you function best. If you try to force yourself into an ass-crack-of-dawn yoga routine when you’re a night owl, then you’re already setting yourself up to fail.

Instead, spend some time figuring out when you feel most energetic and what you actually enjoy. “We’re really good at asking the internet and diet culture these questions,” Gillespie says, “but we don’t often sit with ourselves and ask, ‘body, what do you need right now?’ Sometimes it’s ice cream. Sometimes it’s a walk. Sometimes it’s sleeping.”

“The city is reopening and there’s this desire to immediately bounce back into what we were previously doing,” Harbstreet says. “It can create this really chaotic swinging back and forth from one extreme to the other end of the spectrum. One word of caution would be to ease back into things and really discover what this new normal will look like.”

Cut yourself some slack (and a piece of cake).

Food is fuel. It’s also comfort and crutch and celebration and medicine and probably all of those things at different times for those lucky enough to have a surplus of it.

Chefs and food writers love to talk about “eating with the seasons.” A life-changing pandemic surely qualifies as a season, which makes adjustments in response to it natural. We don’t need to exercise to balance the scales. We don’t need the scales.

Before the lockdown began, I spooned a peanut M&M from a communal dish at work. Someone told me, “you have to walk a football field to burn off the calories from one of those.”