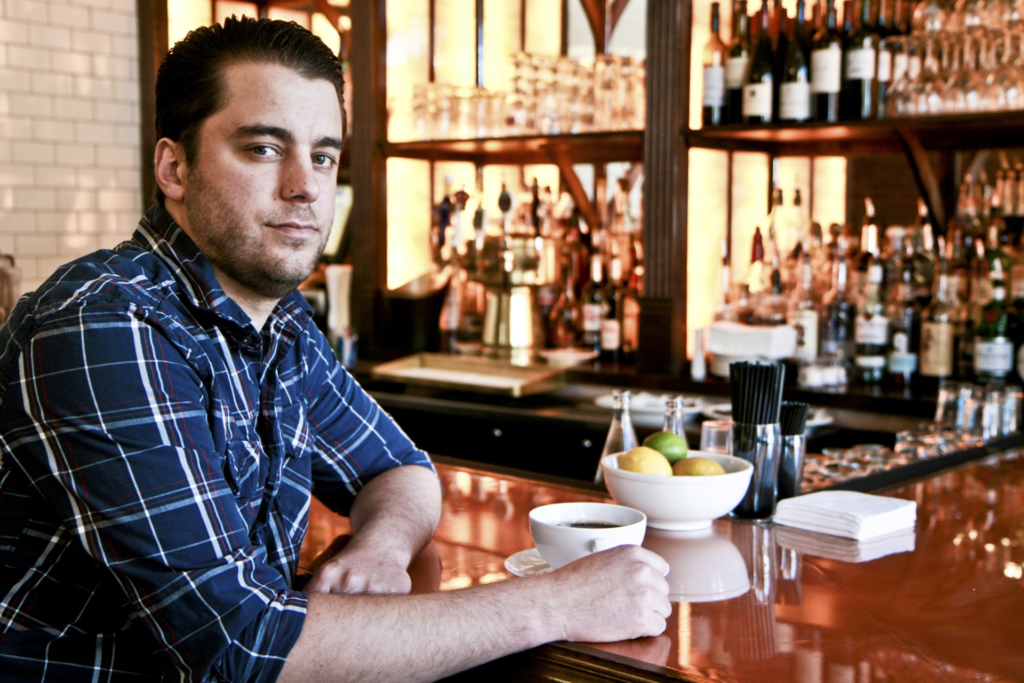 The actress Winona Ryder once said about the price of fame: “Weird people follow you in the street. You can’t sit alone in a restaurant or a café and read a book in peace, and I think everyone values those moments of being alone.”

Now, I’ve never actually seen anyone famous dining in the 5-month-old Westport Café and Bar — and most assuredly not Winona Ryder (though I once saw a thin, dark-haired young woman sitting at the bar who looked kind of like her). But if someone famous did walk into this long, narrow restaurant, I suspect that the patrons here would barely look up from their spring-pea ravioli. This intimate café, the creation of restaurateur Aaron Confessori, is so cosmopolitan that its regular clientele aren’t the type to gawk and stare and make a fuss. Mario Vargas Llosa could stride through the door and earn no fanfare. Meanwhile, this is the place to see someone who kind of looks like him.

Confessori — handsome enough to be a movie star in his own right — doesn’t mind diners who want to sit at one of his bistro tables and read a book. He likes to do that, too, though he rarely finds time to sit. His restaurant wants to be the Westport version of Les Deux Magots or Café de Flore.

“There were a lot of bistros and brasseries in my neighborhood when I lived in New York City,” Confessori says. “I was in culinary school at the time and was inspired by how busy they always were, yet the menu was very simple. The drawing card was the food, of course, great service, an attractive clientele and a solid cocktail program. In those places, everyone was drinking.”

Confessori put those ideas to good use when planning the Westport Café & Bar, where his mixologist friends Ryan Maybee and Beau Williams created a bar program. The venue’s previous tenant, Blanc Burgers + Bottles, also had a bar, but the space wasn’t as pretty or stylish as the one that’s there now, illuminated by golden panes of amber glass. There’s nothing left in the storefront from its tenure as a burger bistro (though Confessori serves his own first-rate burger). Now the floors are a classic black-and-white tile; creamy subway tiles line walls trimmed with dark wood.

It’s not a fancy place, even by bistro standards — the napkins are paper — but there’s a sheen of class to the joint that sets it apart from all of its dining contemporaries in Westport. If anything, Westport Café & Bar evokes a couple of memorable Westport restaurants that don’t exist anymore: the Prospect of Westport (Confessori should be encouraged to steal a few more culinary concepts from that place, the ne plus ultra of midtown sophistication in the 1980s) and Loy Edge’s sexy Zola.

The greatest compliment I can give Confessori and his staff is that the food and service have steadily and solidly improved since the restaurant opened in June. The two versions of steamed mussels are better, and the pommes frites are now more than second-rate fries. The entrees are more enticing, and two months ago Confessori introduced a terrific European-inspired brunch. Recalling the cocktail-swilling crowd at the New York bistros he visited as a French Culinary Institute student, Confessori’s déjeuner begins with home-baked scones and a complimentary Bellini, mimosa or Bloody Mary (or coffee or a soft drink for the nondrinkers).

I chose French-press coffee and wavered between the brioche French toast, a decadent affair made with honey-lavender cream, or a full English breakfast (eggs served with bacon, baked beans, sausage, mushrooms and potatoes) before finally deciding to arrange a breakfast of my own. I spooned pieces of the creamy herb omelet — superb, and as lovely as anything I’ve eaten in Paris — over a bowl of Confessori’s chicken hash. His kitchen makes the hash with duck confit from the dinner menu, so it’s ridiculously rich and so flavorful that I don’t know if I can eat the traditional (and salty) corned-beef version again.

I love the chicken confit at dinner, too. It’s one of my guilty pleasures on a menu that boasts several of them: a salad of roasted beets and fluffy goat cheese sprinkled with a dark, rich balsamic; a juicy grilled steak frites blanketed in béarnaise; a gooey Croque Monsieur sandwich on a flaky croissant; and silky baked ricotta served in a terrine, lightly dappled with truffled honey and served with slices of baguette.

Yes, it’s all fattening, but when it tastes this good, give me the calories. I’m already eager for the autumn version of the ravioli hors d’oeuvres (right now it’s a spring-pea creation that I wanted to love but couldn’t) to be introduced to the menu: goat cheese and caramelized onion.

Oysters or shrimp can be had by the piece here. The shrimp is grilled with a bit of butter, but the kitchen staff will steam the crustaceans upon request, as it did for a friend of mine who “needed to fit into a new dress.” I’m mad for the roasted fennel soup, a supple and satisfying concoction that a server swore had “healing qualities.” The arugula salad, splashed with fresh lemon juice and a dusting of parmesan, did, too.

I came in with a book one day, hoping to sit at one of the sunny back tables alone and suffer through the miseries incurred by Hugo’s La Cousine Bette. I found instead that people-watching is much more entertaining from that spot in the restaurant. Westport Café & Bar attracts an eclectic set of diners, maybe more than any of its neighboring restaurants does. Well-appointed suburbanites sipping Côtes du Rhône sit cheek by jowl with Kansas City Art Institute students drinking beer and eating grilled octopus.

Still, not every Westport regular has figured out what this bistro is all about yet. And because the dining room serves late, there have been a couple of unexpected, intoxicating incidents, such as the two drunk young men who burst through the front door and announced — to the dining room at large — that they wanted a taco.

There are no tacos at Confessori’s bistro, but he’s open to using the ingredients he has on hand to create something special for one of his regulars with a dietary restriction or making a more traditional burger — without the sautéed onions and Gruyère cheese — for a fussy kid.

Me? I just like eating at the back — a pot of coffee and the seared tuna niçoise salad is just right — and pretending not to stare at the other customers. That is, until someone famous comes in. Or someone who simply looks famous. When that happens, I just eat.