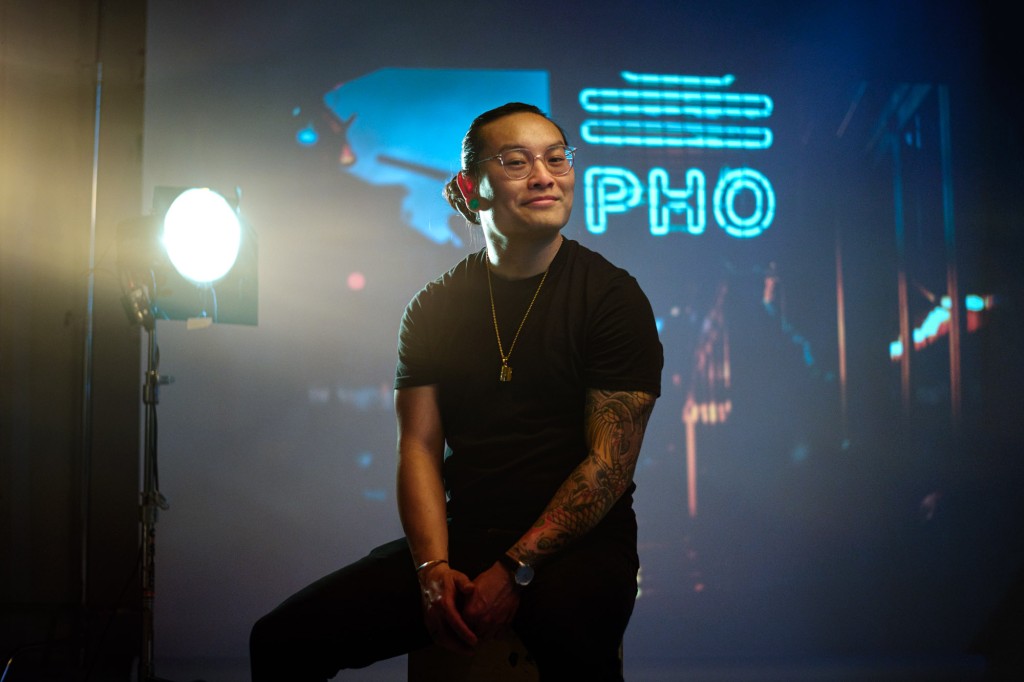 Where is your family’s country of origin?

My parents are from Vietnam.

What brought you and/or your family to Kansas City?

My parents ended up in Garden City, KS, because there was work at a meatpacking plant. That’s where I was born. Then, as I graduated high school, I got a substantial scholarship from any in-state college, so I used it to get me into KU in Lawrence, KS.

I moved to KC after graduating, because it was the closest and biggest city, population-wise, that I had experienced at that point.

When did you start working at Cafe Cà Phê and how did you get connected?

I heard that there was this new random Vietnamese American woman running around KC doing tiny pop-ups outside of nail salons slingin’ Vietnamese coffee. One of her drinks was named “Paris by Night,” and I was like, “Yo, okay, this is a really nuanced Vietnamese inside joke. I have to reach out to this person.”

Paris by Night was a show that was really hot with Vietnamese people who were my parents’ age. It was started in the ’80s in France by a bunch of Vietnamese refugees who were just trying to see themselves after they had been displaced by the Vietnam War.

I’m sure it was just a bunch of Vietnamese folks who were tired of being seen as second-class citizens in the new spaces that they were occupying. So, each show was extremely black-tie. I guess it’s sort of like watching the Academy Awards, if it was more centric on the musical performances. Oh, and make every single person in the audience, the hosts, and the performers Vietnamese.

There were super crazy set designs, super high fashion wardrobes, opera, pop music, and some comedy sketches here and there.

When I was young, it was just my parents and their friends who watched it, so it was easy to just call it super lame and make fun of it. But a lot of folks who were refugees saw themselves in it.

The fact that I never ran into similar experiences growing up Vietnamese made me feel really isolated in the experiences that I had. So, when I saw this little experience trolled onto a Vietnamese coffee shop menu, I knew I had found something already so close to my soul.

I immediately looked up her next pop-up (which was outside a nail salon), showed up, and just asked how I could help.

Cafe Cà Phê is all about the culture. How do you see your culture fitting in?

I’m Vietnamese, and this coffee is hella Vietnamese. No, but really. It’s cool seeing folks starting to understand that this whole other world of coffee exists. And Cafe Cà Phê helps to bridge that conversation through beverages.

Not a lot of people will go out of their way to listen, research, or understand what you’re about. But they will eat and drink what you have to offer. And I think that’s a good starting point and a huge catalyst in working your way towards understanding different cultures.

How has working at Cafe Cà Phê impacted your connection to the Kansas City AAPI community?

Yo, I was 100% disconnected from any semblance of community. I grew up with other immigrant families and hung out with so many kids my age who looked like me. After going to college, I lost that direct link, and by the time I graduated, I think I had gotten so used to not seeing so many Asians around that I unconsciously just stopped trying to pursue that sort of kinship.

After Cafe Cà Phê came through and started bringing other Asian Americans together, it made me realize that I had been void of this kind of interaction for a really long time, and it made me remember how important it is to hold your identity with you.

Can you share something about your culture that maybe our readers wouldn’t know about?

The flag that Vietnamese refugees, like my parents, use is not the Vietnamese flag you see if look it up. I grew up only knowing the yellow flag with three red stripes, because it’s the only Vietnamese flag I ever saw anywhere stateside. I used to play a ton of video games where you could choose a flag/nationality and always saw a different flag in those games.

And then you go to your phone and look for the Vietnamese flag emoji and it’s not there.

Even in my high school, the main hallway had flags from every nation, and the Vietnamese one they had wasn’t the one my parents and all their friends used. The one that is there is a red flag with a yellow star—the Socialist Republic of Vietnam flag.

The flag that my parents use, and what a lot of Vietnamese immigrants use, stopped being officially recognized after the fall of Saigon during the Vietnam War in 1975.

It’s just a crazy thing to think about. I’m sure there’s a lot of pride and a lot of pain for my parents with all of that.

What does AAPI Heritage Month mean to you?

It’s an opportunity to actually know that my experience as an Asian American is commonplace. That it is valid enough in the context of this nation to even have a month of acknowledgment. It’s a time to reflect on myself and my family as we exist in this nation.

My entire family lineage has only existed in this country for, like, 40 years. So, there aren’t a lot of contemporary things to find myself in. And this seems like a good place to start.

What are three fun facts about you?

In the year 2000, a movie came out called Romeo Must Die. The lead was Jet Li, an Asian dude, and the love interest was Aaliyah. For some reason, it made me think, “Okay, if Aaliyah thinks this Asian dude is cool, then she’ll probably think I’m super cool. And if Aaliyah kisses dudes like Jet Li, then I for sure am going to marry Aaliyah.”

So, short answer, Aaliyah has a big spot in my heart because I felt like I could be cool for the first time because of that movie.

My mom started a nail salon when I was young, so I literally grew up in a nail salon and then continued working there through high school as a receptionist and janitor.

I shoot and develop film in my basement. I’ve been processing film at home for the past eight years. It’s super neat.

Yo, Hella Good all day. Saigon if I’m tired as fuck (it punches pretty hard).

In the context of a young Asian boi starved of representation in the ’90s, who just wanted to marry Aaliyah, I’ll go with “Tell Me” by Smilez & Southstar.

As a 30-something, still sort of hungry for that, let’s go with “Jurban District” by Ginger Root, mostly because we’re both nerdy Asians with long hair (and make good music).

How can we support your community/culture in Kansas City?

Have some coffee. Support the Cafe Cà Phê crew and the forever list of Asian vendors at the pop-ups.