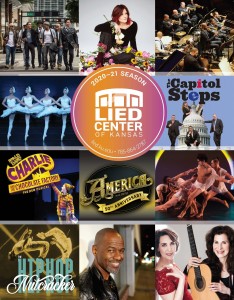 The Lied Center of Kansas announced their 2020-21 season this evening. Now, granted, The New York Times published a piece this weekend entitled “The Fall of Autumn: Live Performance Producers Are Giving Up on 2020,” wherein the chairman of AEG Presents, Jay Marciano, flat-out states, “It doesn’t seem likely we are going to open in the fall.”

It would be really, really easy to dismiss this announcement, but in an effort to combat our tendencies toward lighthearted snark with a bit of clenched teeth “we fucking need this,” tempered with unbridled optimism, we’re going to cross our fingers and highlight a few shows for which we’re excitedly hopeful. As Derek Kwan, executive director of the Lied Center, commented in the Lied’s press release, “Since it is impossible to predict how the current situation will unfold, we want to move forward with the same sense of optimism and hope that the performing arts bring to the world.”

For the Lied’s 25th anniversary season in 2018, Marsalis composed Rock Chalk Suite, a 15-part piece, wherein each movement saluted University of Kansas basketball legends such as Phog Allen, Lynette Woodard, Paul Pierce, and Wilt Chamberlain. This marks the return of the renowned trumpeter and artistic director of Jazz at Lincoln Center to Lawrence for the first time since then, and the program is sure to be a walk through the great works of jazz.

R&B artist Brian McKnight on keys and vocals, along with a crack backing band, means you know you’re going to get renditions of “You Should Be Mine (Don’t Waste Your Time),” “One Last Cry,” and that song every person of a certain age has definitely slow-danced to, “Back At One.” As the singer’s aged, his voice has gotten more melifluous, so expect some real Teddy Pendergrass action.

Usually, by this point, most bands hitting their 50th anniversary are sorely lacking in original members, but both Gerry Beckley and Dewey Bunnell have been with America since its 1970 inception. You know that “Sister Golden Hair” and “A Horse with No Name” aren’t going to be until the end, but you get “I Need You” and “Venture Highway” as part of the journey. Throw in covers of some other excellent songs, and those gorgeous harmonies, and it’s one great trip.

The Lied bills Cash as “Americana music royalty,” and they’re not wrong. The fact that she’s Johnny Cash’s daughter is almost a footnote at this point, given her string of early ’80s hits and the brilliance of 1990’s Interiors. “Seven Year Ache” is still heartwrenchingly wonderful and can you imagine listening to it on Valentine’s Day? Plus, the singer/songwriter hasn’t been through the area since a November 2012 show at the Folly, meaning the crowd for this show’s gonna be a hot one, no matter what.

Man, Robbie Fulks is a good time. He played some friends’ wedding reception years ago, and it was maybe the most fun I’ve ever had at an event without an open bar. He’s witty as hell, both in his songs and on-stage banter. This is part of the Lied’s Folk Series, meaning he’s playing the Lied Center Pavilion, which only holds around 200 people, making for a really intimate show. I saw Loudon Wainwright III there a couple years back, and it was like he was in my living room. Highly recommended, this one.

Per ElSaffar’s website, “The Two Rivers Ensemble is a sextet of jazz and Middle Eastern musicians that has made innovative strides in in using the maqam modal system with the American jazz idiom.” This is a very wordy way of saying that the group mixes the musical traditions and forms of Iraq and the surrounding area with the “swing” of jazz. It’s complex and intricate, but by no means is it overly heady.

There are cats and dogs doing tricks onstage while wearing funny costumes.

SHUT UP WE NEED THIS.

Digital expansion is in vogue for KC Fashion Week