A table for two…and one ghost, please 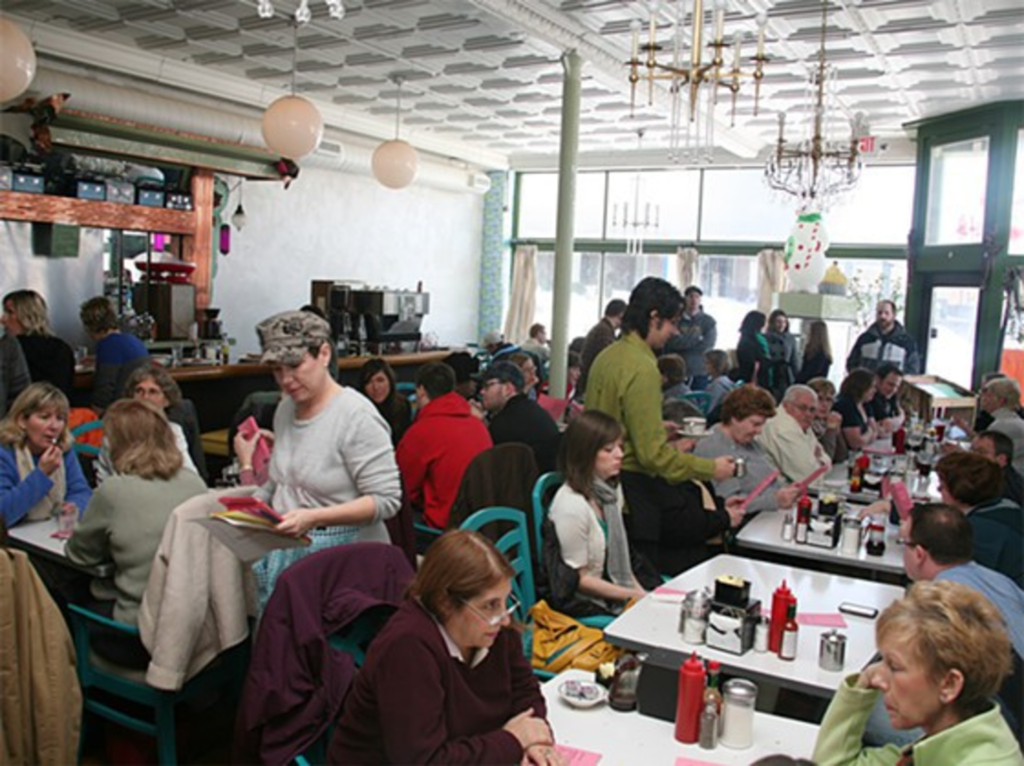 A number of Kansas City restaurants are known to have patrons or former tenants materialize from beyond the grave, apparently unwilling to pass gently into the Great Beyond. Most of the haunted are older buildings with long and colorful histories.

There’s Pierpont’s, for example, the upscale steakhouse carved from the bones of a former women’s seating lounge inside 99-year-old Union Station. Back in 2010, owner Rod Anderson insisted that he had heard unusual noises, late at night, when he was closing up the dining room. “I’m not one who believes any of that,” he said at the time. “But there are nights, when I’m closing up, that I really do hear some weird noises. I guess it could be the sound of the refrigeration equipment, but I’m telling you, I never heard any refrigerators sound like that.”

The sounds might have unnerved Anderson, but when Zak Bagans and his team from the Travel Channel’s Ghost Adventures investigated the Pierpont’s space last year, they came away empty-handed. The only spirits they could conjure in the marble-tiled lounge were behind the bar – in bottles.

The Ghost Adventures crew would have had more luck had they traveled to the historic Longfellow neighborhood, east of Union Station, where Beth Barden, owner of Succotash at 2601 Holmes, has a resident spirit left over from when the bruncheonette was the Dutch Hill Bar & Grill. A longtime regular at that saloon was a customer called Radar, who frequently sat at the bar nursing a cocktail and a cigarillo. When Barden was renovating the 100-year-old building, in 2009, she smelled those distinctive little cigars in the dining room.

“It wasn’t an old-smoke smell,” Barden tells me. “It smells like he had just lit one up.”

There’s supposedly a different ghost two blocks south, at You Say Tomato, the restaurant at 2801 Holmes operated by Randy Park and Mark Wingard. This spirit is believed to be a member of the Anello family, which ran a grocery store in the storefront space for decades. The specter makes his or her presence known by knocking things over or sending a stack of handmade greeting cards off the front counter.

“It’s sort of shocking when the cards go flying off the counter,” Park says. “But we’ve gotten used to it.”

But the lonely solo acts at Succotash and You Say Tomato are paltry presences compared with the ghostly gang at the Majestic Restaurant. Frank Sebree Jr. says his space, at 931 Broadway, has 16 different ghosts doing their thing where the former Fitzpatrick’s Saloon once stood. (The uppermost floor of that three-story bar was reportedly a brothel during the Pendergast era.)

Michelle Yates, a Missouri paranormal investigator, says ghosts aren’t particularly attracted to restaurants. If a hospitality business has a resident spirit, it’s probably an accident of history or the building rather than a dedicated haunting.

Yates speaks with authority on this point, having owned, she says, a haunted restaurant.

“I owned a barbecue restaurant outside of Cameron, Missouri, that was in a building that had once been a very busy railroad hotel,” she says. “So many people had come through that building over the years that there were many spirits still active in it. But the fact that it had been a restaurant was not an important variable in its paranormal history.”

A few other KC restaurants with pedigreed phantoms include the space formerly occupied by Café Picardy, in the Muehlebach Hotel; the Webster House (a former 19th-century schoolhouse where a spirit called Charlotte likes to move things around); and the Savoy Grill. The latter is of course Kansas City’s oldest operating dining room (at 219 West Ninth Street), so its ghosts might also be the longest departed.

The greatest variety of spirits might be found at the 85-year-old building at 5031 Main, which has seen life as a dry-cleaning joint, a gay bar, a jazz club, a Chinese buffet and, most recently, the short-lived Beacon. Now that the space is being transformed into an urban branch of the popular local Nick & Jake’s suburban chain, perhaps whatever otherworldly figures reside there can take a sabbatical long enough for the new owners to scare up a little business.