A Shock to the System 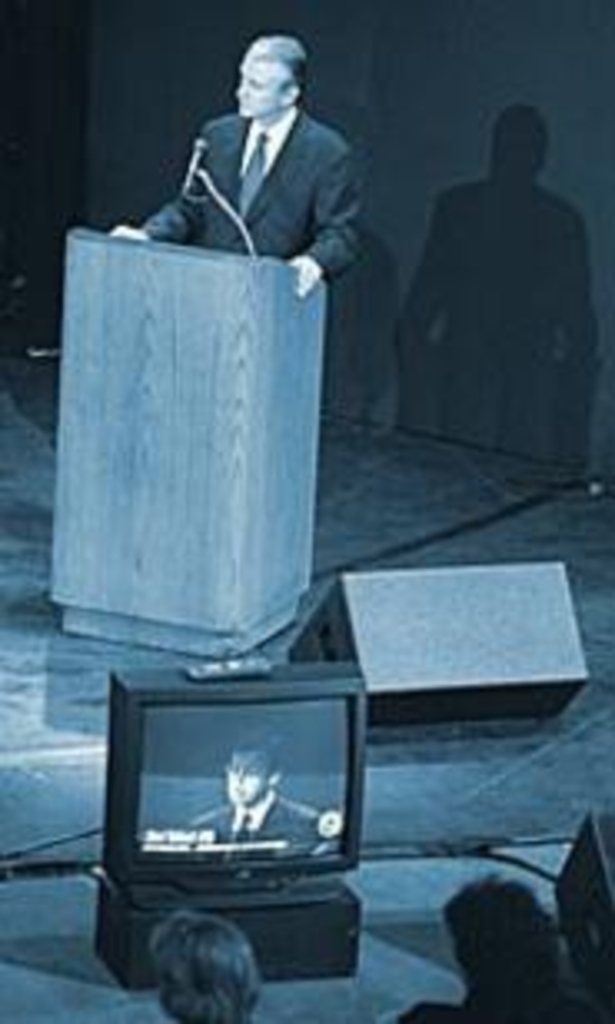 There’s no diminishing the pain that goes with losing Governor Mel Carnahan. But there’s political pain also. Carnahan’s name will remain on the ballot, and it is possible he could beat incumbent Senator John Ashcroft — but it’s not likely. A sympathy vote won’t elect a U.S. Senator.

As this issue of Pitch Weekly went to press, Governor Roger Wilson reportedly was appointing Carnahan’s widow, Jean, to fill the U.S. Senate seat if Carnahan managed to posthumously beat Ashcroft. It’s something the Democrats believe they have to do, a necessary move to get other Democratic candidates and their supporters refocused on their respective campaigns. Neither former Senator Tom Eagleton from St. Louis nor State Auditor Claire McCaskill, who also had been mentioned as possible appointees, could have brought that about; both have political histories that would have attracted criticism and controversy. Eagleton has been absent from public view too long to inspire Carnahan voters, and he still carries an old-line liberal tag that Ashcroft wouldn’t have hesitated to jump on. And McCaskill wouldn’t risk political capital on a long shot at getting into the U.S. Senate, considering Missouri has stepped deeper into conservatism since 1988, when Lieutenant Governor Harriett Woods ran for Senate. The Democrats’ gesture to go with Jean Carnahan is more of a respectful nod to her husband’s legacy and his family than any attempt to capture the Senate seat. Outside of a miracle, the Democrats have lost to Ashcroft.

Attention should now shift to the governor’s race between St. Louis Congressman Jim Talent and State Treasurer Bob Holden. Losing the governorship in November would send Missouri Democrats back to their dismal position of the late ’80s, before Carnahan revitalized the party with his win.

With that in mind, Democrats are reluctantly noting that the media attention focusing on Carnahan’s achievements with regard to children’s health issues and education helps Holden. Carnahan pushed through a tax increase in 1993 for his Outstanding Schools Act to fund, for example, all-day kindergarten and computers in classrooms, and required performance standards for schools. Holden proposes to carry those ideas along and push for reducing class sizes, ending social promotion, and expanding the Parents as Teachers program.

“There’s a parallel to what Mel has done and what Bob wants to do,” says Vicki Walker, a Holden campaign coordinator in Jackson County. “The legacy is best left in Holden’s hands.”

At Holden’s headquarters in St. Louis, staffers first talk about Carnahan’s death in terms of shock. “It doesn’t affect the dynamic (of the race),” says Kim Baldwin, Holden’s communication director. “What it affects most is the staff. We’re human. It was a Mach-10 punch in the stomach. It’s hard to get that (political) momentum back.”

But Baldwin does believe Talent has “run his campaign as a referendum against the Carnahan administration.”

That seems obvious from Talent’s stump speech. He talks about how children’s reading scores fall as they move up through the grades, and about the need for “some form of school choice.” At the October 10 Kansas City debate with Holden, Talent painted a bleak picture of Missouri’s educational offerings — it was a stark contrast to the media’s posthumous praise of Carnahan’s accomplishments in education.

Talent touts his Classroom Trust Fund, promising to direct all of the state’s gambling money to schools. He charges that gaming revenue is being “commingled” with general revenue, and he wants the gaming revenue deposited directly into a fund for eventual allocation to school districts. He says some school districts have not seen an increase in funding since 1993 because of the Outstanding Schools Act. At the Kansas City debate, Talent pressed the point.

Holden disputed the argument, saying gambling money was going to the schools and that Talent’s plan would “undermine equality” set in the current state funding formula, thereby inviting a court challenge. “I don’t know why Congressman Talent feels the state is in the tank, because it’s not true,” Baldwin adds.

But being in politics, Baldwin does know. Education is an effective campaign issue because it blunts charges that a candidate is too conservative or too liberal. Everybody is for educating the young; the question is how much government should be involved. Staying fuzzy on that point and knowing that people always believe schools can and should get better help a candidate strike a centralist position regardless of his political party. Holden took that pose during the Kansas City debate by appearing receptive to the idea of school vouchers — which Talent supports — when he said, “I don’t know yet if they work.”

But the centrist-making equation may have changed in Missouri, especially when it involves directing criticism back to the previous administration.

“It’s a huge problem for Talent since he has spent months on the premise that Carnahan was a bad governor,” says Kansas City political consultant and longtime Democrat Steve Glorioso. “It puts him in a bad position if he continues to do that.”

If that’s true, state Republicans don’t seem worried. John Hancock, executive director of the Missouri Republican Party, doesn’t think Carnahan’s death will affect the Talent/Holden race. Or, if he does, he’s not saying much about it. “It is the first time anything like this has happened,” Hancock says, “and we have no way of knowing (how it will affect the gubernatorial campaign).”

Michelle Dimarob, communication director at Talent’s St. Louis headquarters, doesn’t think Talent needs to change his message. “Congressman Talent runs a positive, upbeat, and energetic campaign, and that will continue to be the same message,” says Dimarob. “He’s running a campaign he can be proud of.”

But in a close race — polls have shown Holden leading with three to five percentage points — Democrats or Republicans could adjust their campaign message; Holden could stress his connection to the Carnahan legacy and Talent could shift away from his emphasis on gambling revenue for education. The Democrats also have to worry about turnout. With the Senate race in Ashcroft’s lap, will Democrats turn out for Holden? Much of that may depend on the presidential race, for which pollsters have been predicting a low turnout nationally for months.

The loss of Mel Carnahan has created a deep emptiness for the family he left behind. In the political world, the effect has yet to be completely felt.