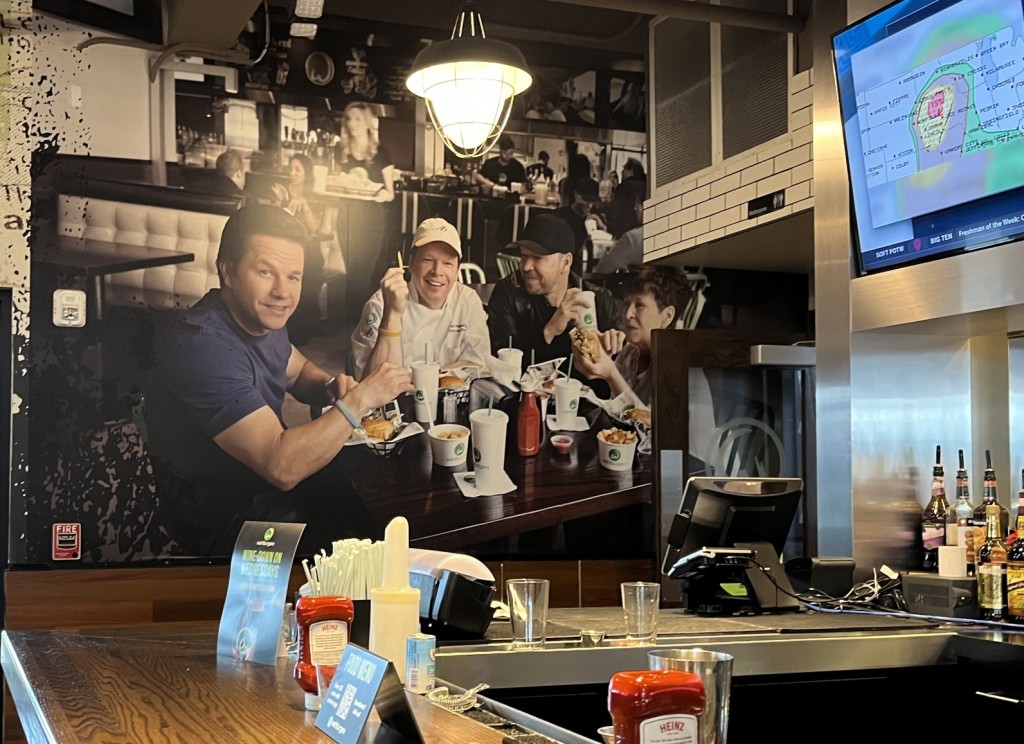 The boys are back. // Photo by Patrick Moore

Eating at three different Wahlburger locations was 100% my idea. No one at The Pitch was begging for this coverage.

I have a strange fascination with the entire Wahlberg family. I’ve also seen every episode of Wahlburgers (reality show that aired on A&E for 10 seasons) and the HBO Max series, WahlStreet that’s all about the business hustle.

None of these shows are good, yet I can’t stop watching. Is Mark Wahlberg even a good actor? Remember when he took over the Transformers franchise from Shia LaBeouf?

I had to further this obsession and find out what these Wahlburgers are all about. I went to three different locations and ranked each with the best suited Mark Wahlberg movie.  Two of the three stores were located inside Hy-Vee, a partnership I learned of in season six of Wahlburgers.

I hate driving in Lee’s Summit. It’s a lot of chains, churches, and republican swingers. I walked in through the side entrance and immediately found a surprisingly dimly lit bar area where everyone stared at me. I used to drink at Applebee’s alone, and this may have been the saddest group of regulars I’ve ever encountered—all middle aged men in polos and khakis just seemingly angry at the world with their grocery carts behind them, drinking as many Wahlbrewski’s as they could. It’s really the 2022 version of Cheers.

A lot of angry Yelp reviews talk about how long they had to wait for service. That was not the case for me. Someone was behind the register and took my order right away.

I ordered The Our Burger at all three locations. It’s their basic single burger that contains beef burger, “government” cheese, lettuce, tomato, onion, pickles, and Paul’s signature Wahl Sauce for $11.99. It comes with a side of fries, tots, or sweet potato tots.

The cashier asked me if I was okay with my burger being cooked medium, which led me to believe they’re just reheating burgers in the kitchen. Based on the way it tasted, I think I was right. It was similar to a burger you’d get at a snack bar or public pool—simultaneously greasy and dry. The fries were soft and flavorless. The Wahl Sauce was blander than Mark’s performance in The Happening.

At least I got to eat by myself at a Hy-vee in Lee’s Summit. It’s a really great place to contemplate all the decisions in your life leading up to that moment.

Mark Wahlberg Movie Ranking: The Truth About Charlie—a confusing remake of a classic that makes no sense. 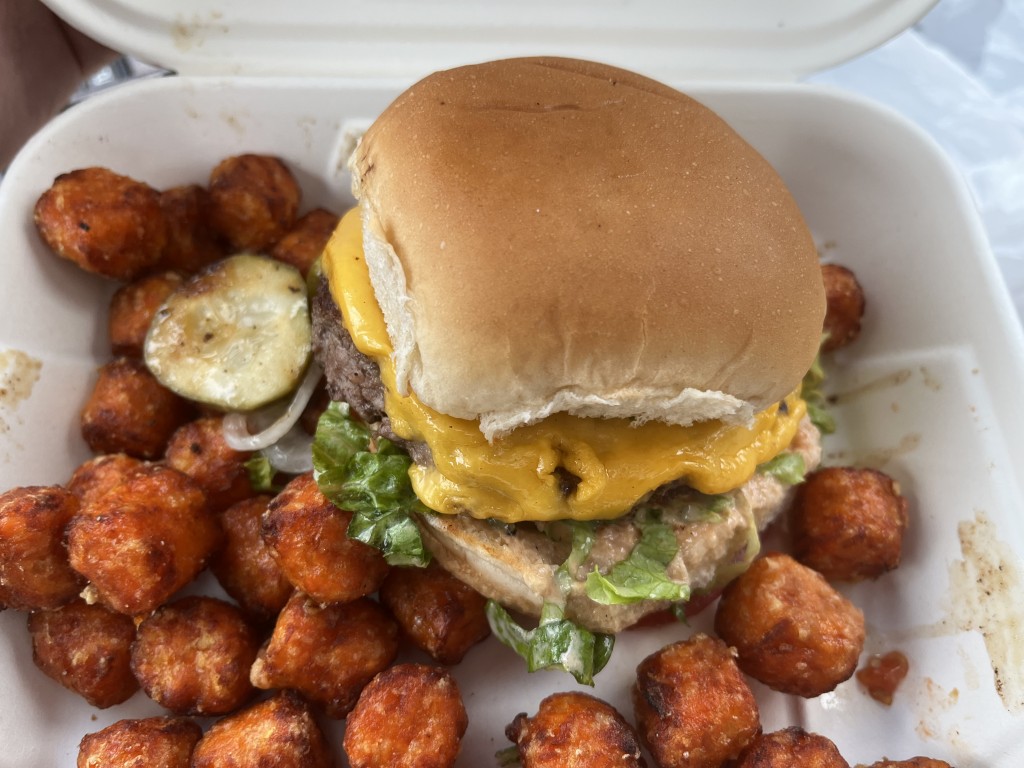 The Our Burger. // Photo by Patrick Moore

This is the lone  Wahlburger’s location that isn’t inside a grocery store and is the only franchise in the metro. I’ll be honest, I was not in a great mood when I went here. I went to a 10 a.m. screening of The Bad Guys at Olathe AMC and was surrounded by screaming children. But since I was already in hell—I mean the neighborhood, I figured I’d check out the Wahlburger’s nearby.

When you walk in you get neighborhood bar and grill vibes. The bartender was nice, knowledgeable, and really fast. She even asked me how I wanted my burger cooked, and this time, The Our Burger was an above average fast food item. I also got the sweet potato tots this time, and they were awesome. I wish it was an option at more places.

The price point is pretty high, but if you’re in Olathe and wanting to try Wahlburger’s, then I would recommend it. It’s so much better than the grocery store locations. 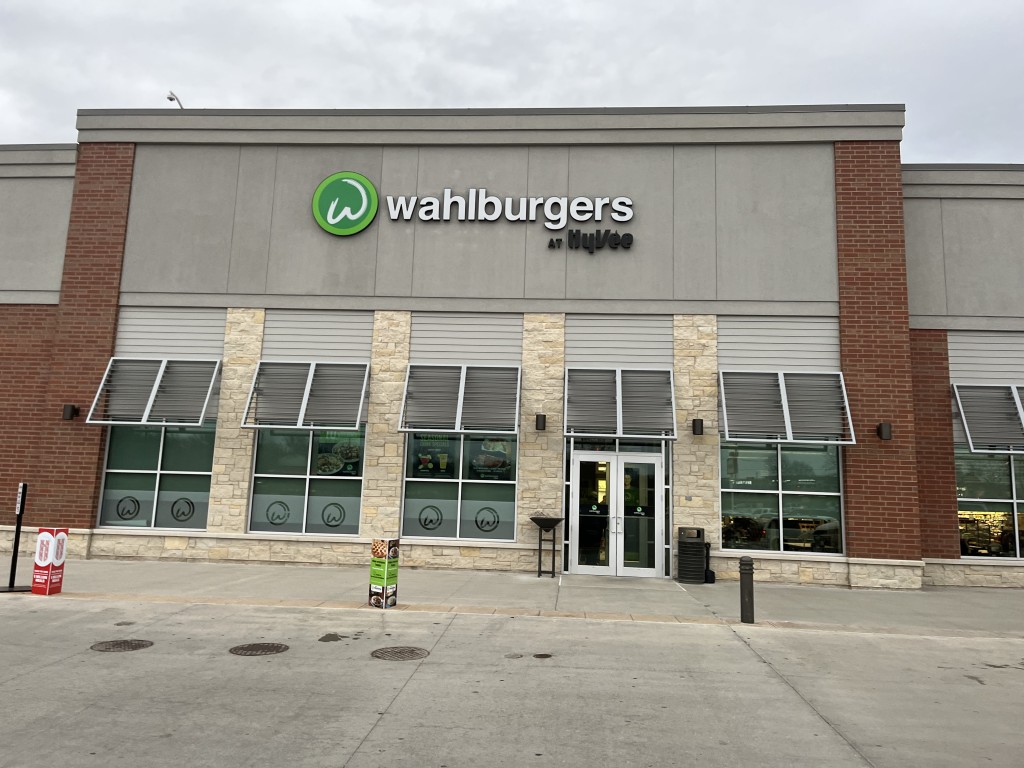 Parkville had the most brutal Google reviews out of all the locations. It’s honestly what made me want to write about Wahlburgers in the first place. It stands at 2.1 out of 5 stars with 32 reviews total. Most of the negative reviews are about the long wait time, lack of cleanliness, and lack of service.

This is a common complaint about most of the Hy-Vee food court areas in general, however, one review mentioned how they brought their family visiting from Maryland and Tennessee to this location. If you bring your out-of-town family to eat Wahlburgers at Hy-Vee instead of Gates, then you’re really missing the mark. 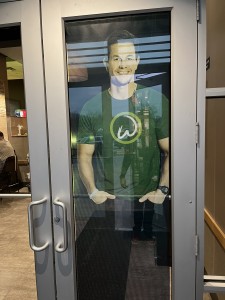 Mark Walhberg gazes into the souls of patrons. // Photo by Patrick Moore

Parkville was way better than Lee’s Summit. It wasn’t as good as Olathe, but it was still a totally digestable and forgettable fast food meal. The same prices could get you Shake Shack, which is far superior in every way.

Mark Wahlberg Movie Ranking: Contraband—surprisingly pretty good even though you can’t remember if you’ve seen it.

In conclusion, there is absolutely zero reason to go to Wahlburger’s. Thank you for your time.