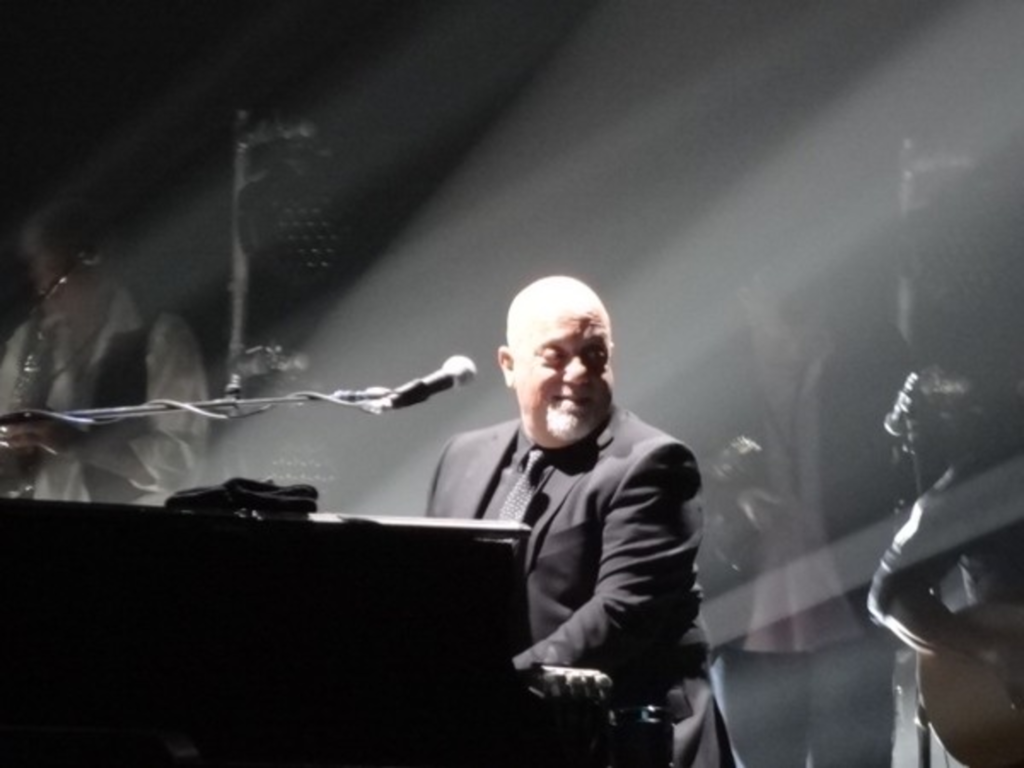 In 1978, on the 52nd Street tour, Billy Joel was still playing colleges, and his shows were manic. At a stop at the old Ahearn Fieldhouse at Kansas State, for instance, Joel, in his then-standard swept-back black hair, button down shirt, straight-leg jeans, sport coat and white K-Swiss tennis shoes, sprinted constantly and frantically up and down and across layers of stage ramps.

Back then, he rode himself hard. 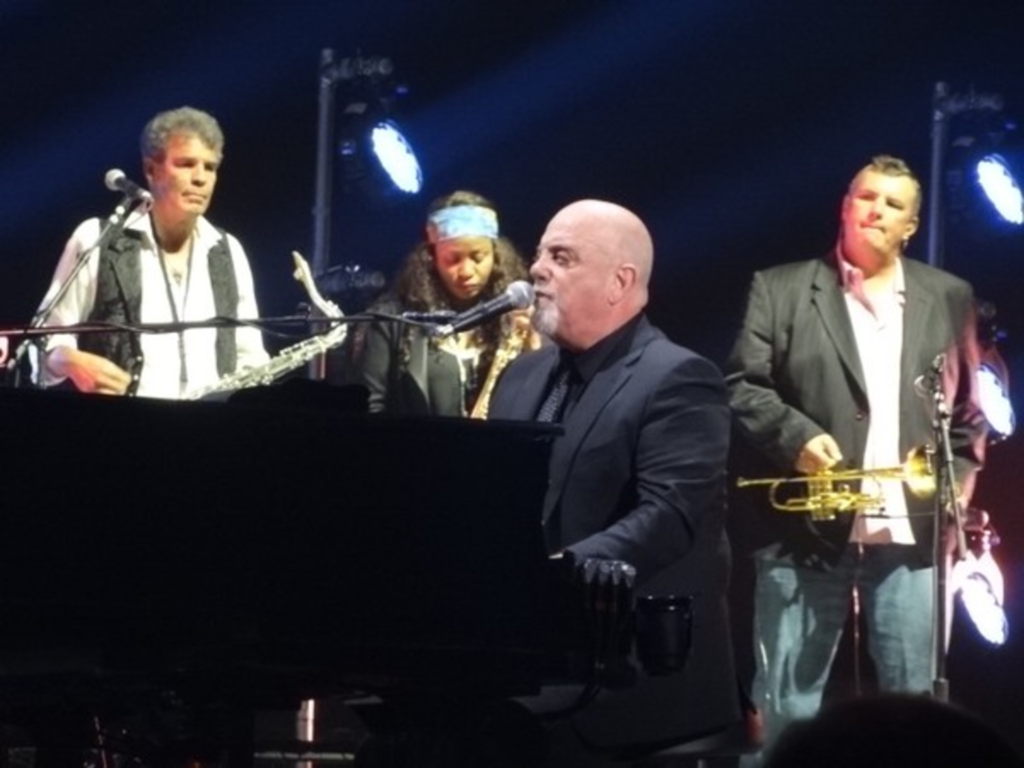 At last night’s nearly sold-out Sprint Center show, he worked just as hard – and the carbon-dating midpoint for the music he played was probably still 1978. This time, he was decked in all-black suit and shirt and a white-dotted tie that was never once loosened.

But this time, until near the end, the stage show was relatively static. Typically, Joel remained seated, even while his piano rotated occasionally to let him face every corner of his audience. (The first time was a little disconcerting; it looked like he was locking in his baby grand Howitzer on a distant target.)

But from the moment he and the band hit the stage to the melody from Beethoven’s Ninth Symphony (or “Joyful, Joyful, We Adore Thee,” if you prefer) and then segued into a manifesto mini-set with “My Life” and “Moving Out,” it was clear that the evening was going to be about his songs – a lot of songs.

Joel also gracefully acknowledged that time – a lot of time – has passed. The most telling moment was when he caught a glimpse of himself on a video monitor and said “I look just like my dad now.”

“I did not want to look anything like my dad,” Joel admitted with a smile and a sigh, “But there he is.”

In recent interviews, Joel revealed that when he tours with Elton John, Elton likes to play the same set each night. For this tour, Joel made it clear that he was glad to be able to wing it a little. Early in the show, he offered song options, letting the audience choose between two tunes. (Not surprisingly, “The Stranger” and “Vienna” won.) 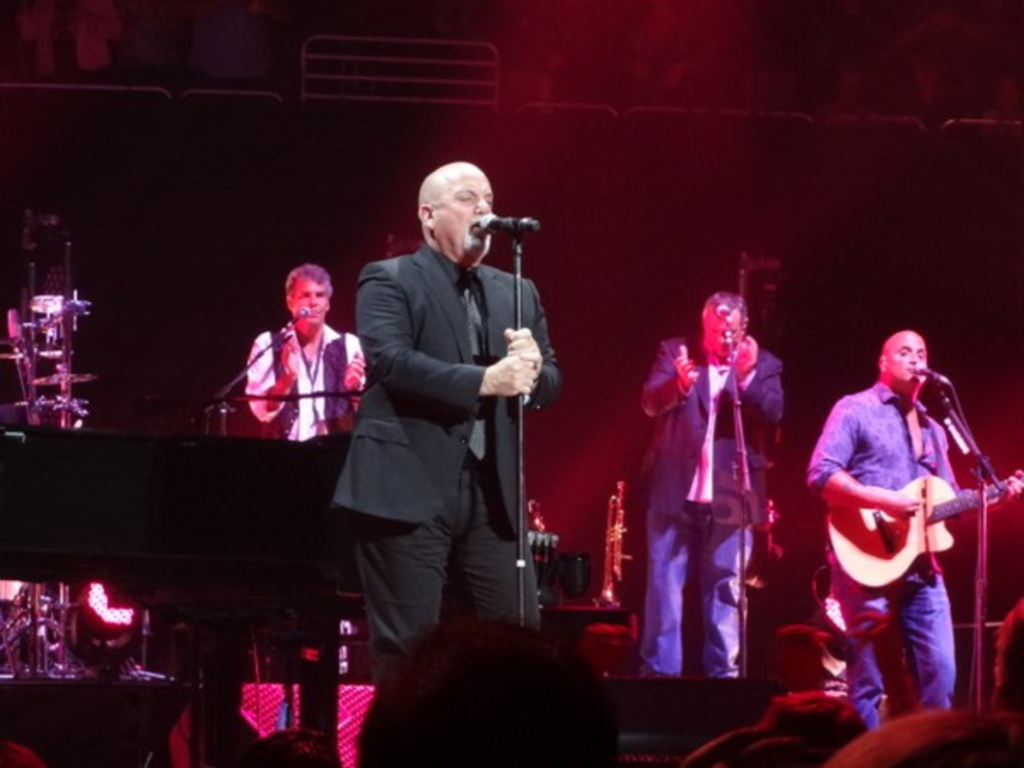 Later in the show, introducing the doo-wop tribute “The Longest Time,” he said, smiling, “We haven’t done this song in the…,” tapering off at the end. He even ended up starting over when the harmonies weren’t quite right. Those moments, far from feeling ragged, gave the show aan improvised club-show feel.

Joel himself also seemed entirely relaxed. His sense of humor led him to take on things like throat spray (and Madonna’s voice), and, after a verse of “This Song,” the irony of Elton John singing about not having much money. After back-announcing what he described as the “mushy, MOR portion of the show”, he leapt into a lush version of “Just the Way You Are.” (Though after the last chords died out, he grinned and said, “Anyway, it didn’t work out.”)

That joking around never obscured how well he and the band played. His band – especially conga, percussion and sax player Crystal Taliefero and sax man Mark Rivera – was tight, and with the exception of that little six-part harmony slip-up, right where they needed to be. Whether they were working with jazz-tinged tunes like “Zanzibar,” or “New York State of Mind,” cranking through semi-apocalyptic pop tunes like “Miami 2017 (Seen the Lights Go Out on Broadway)”or “We Didn’t Start the Fire” (with Joel on guitar!) or busting loose with an enormous, joyous version of “Scenes from an Italian Restaurant,” they knew how to give Joel room to maneuver. With the requisite “Piano Man” (complete with gigantic sing-along) and the show closing “Only the Good Die Young,” they’d clearly poured out everything they had. 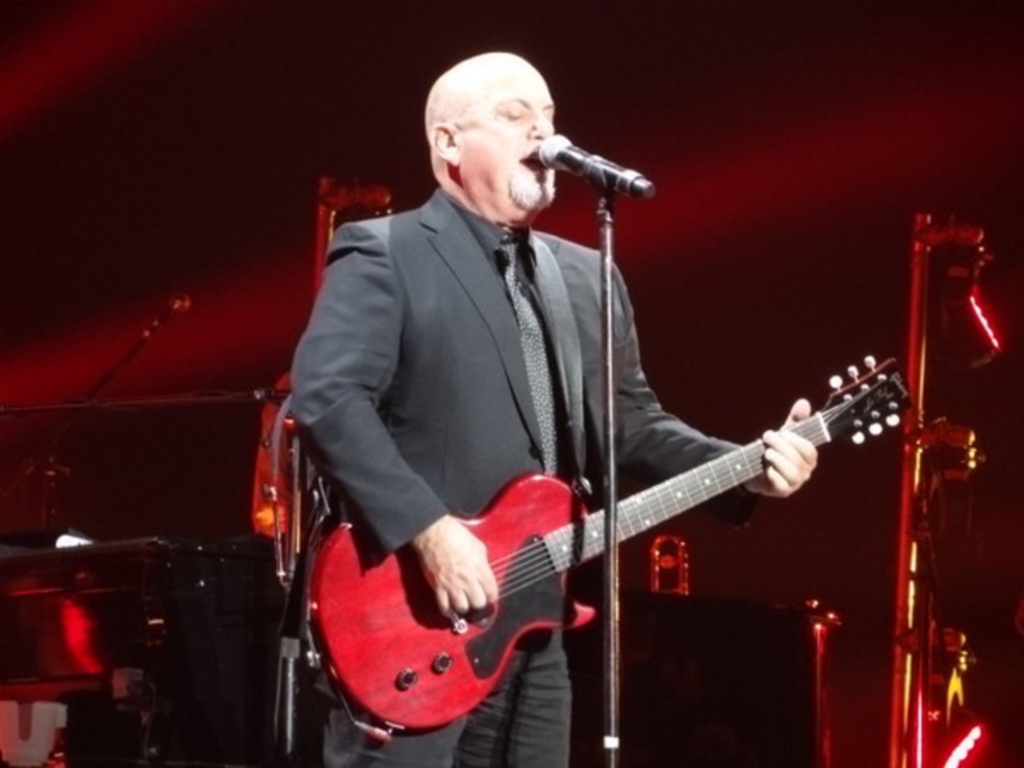 By the end of the show, for the straight-ahead rock and roll encore, Joel was clowning around pretty relentlessly, pantomiming pearls and fancy hair during “Uptown Girl. With “Still Rock and Roll,” he did wild and amazing stunts with a mic stand, including baton twirls, perfectly-timed dance moves – and he let it drop it pretty hard.

The best aspect of the show was Joel sweating it out and just plain having fun. He took his audience – and, by extension, his music – completely seriously. Himself? Not so much.

Leftovers: One of the unique aspects of Joel’s show is that he filled two and a half hours without new music or covers. (Well, there was that kind of inexplicable verse of ZZ Top’s, sung by guitarist/vocalist Mike Delguidice “Tush” tucked right in the middle of the otherwise gospel-based “River of Dreams.”) There were snippets of Beethoven, “Kansas City,” and “America” from West Side Story, but  the show was all vintage Joel. The songs that lost the votes, “All for Leyna” and “Summer Highland Falls,” would have been great to hear. It’s too bad concerts don’t come with bonus tracks.

Setlist:
My Life
Movin’ Out (Anthony’s Song)
Kansas City
The Stranger
Zanzibar
Vienna
The Entertainer
Ballad of Billy the Kid
An Innocent Man
New York State of Mind
The Longest Time
Just The Way You Are
Miami 2017 (Seen the Lights Go Out on Broadway)
Sometimes A Fantasy
Allentown
She’s Always a Woman To Me
Don’t Ask Me Why
We Didn’t Start The Fire
The River of Dreams
Scenes from an Italian Restaurant
Piano Man
—-
Uptown Girl
It’s Still Rock and Roll to Me
Big Shot
You May Be Right (I May Be Crazy)
Only The Good Die Young