A new Woodlands would be more than just horses — which makes Hollywood Casino and its lobbyists feel undercut.

Deniese Davis has no interest in placing bets.

Davis, the politically savvy leader of the North Welborn Watch Group, lives close to the Woodlands, in western Wyandotte County. The track has sat abandoned since 2008, when horse and dog racing there came to an end. An effort now on the table to revive the property sounds promising to Davis — closer to a sure thing than to a gamble.

Her optimism has a lot to do with the Woodlands’ new owner: Las Vegas billionaire Phil Ruffin. He bought the property — at Leavenworth Road and North 99th Street — last year for about $15 million. And he says he wants to bring horse racing back to the old track (no greyhounds this time around), part of a larger plan to pump at least $75 million into renovations.

But Ruffin and his plan have drawn powerful critics. One of them is Hollywood Casino, the flashy betting house five miles south of the Woodlands. Hollywood Casino opened in 2012 as a joint venture between Penn National Gaming — one of the country’s biggest casino operators — and International Speedway Corporation, which owns the adjacent Kansas Speedway.

Ask Davis if there are conditions to her positive feelings about a new Woodlands, and she says: “I think it has to be a level playing field.” Hollywood Casino’s relationship to its community — as well as its opposition to Ruffin — is what she’s talking about. For Ruffin and his supporters, fairness means the opportunity to reopen a piece of Wyandotte County history without asking for incentives. To Hollywood Casino and its owners, fairness means Ruffin not relying on his team of lobbyists in Topeka to get laws changed that would lower the tax rates on gaming revenue at the Woodlands.

While an easy majority of residents at an April meeting of the Unified Government of Wyandotte/Kansas City, Kansas, commissioners spoke in favor of reopening the Woodlands, Ruffin has influential adversaries beyond the casino.

Former UG Mayor Carol Marinovich is the director of Protest the Partnership, an opaque group that disfavors Ruffin’s plan. In that role, Marinovich has lobbied in Topeka against legislation that would help the Woodlands.

And while Hollywood’s ownership says its concerns about the Woodlands are only a desire for fairness, the casino hasn’t always dealt Wyandotte County a full hand. 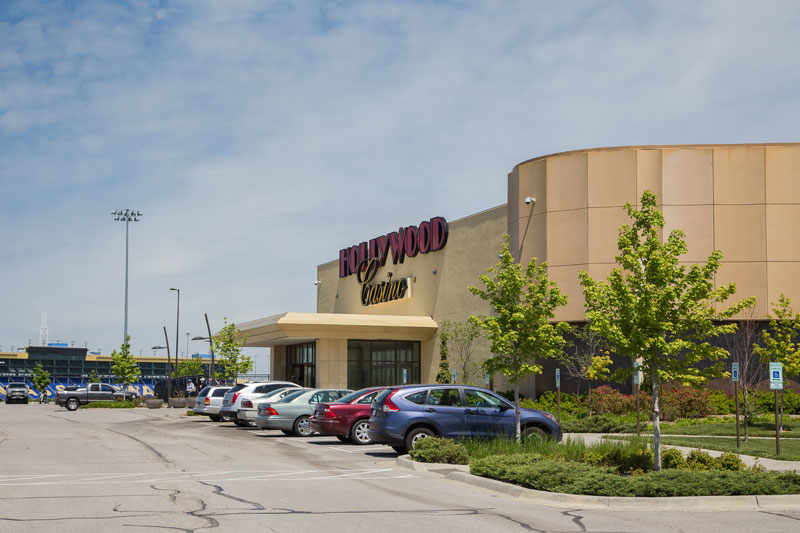 On May 7, more than 100,000 people gathered at the Kansas Speedway for another round of the Sprint Cup racing series.

The auto track is in many ways a symbol of Wyandotte County’s emergence from sleepy, patronage-politics community to competitive metro-KC force. Before the Kansas Speedway opened, in 2001, there were few reasons for big crowds to surge into western Wyandotte County. But over the past decade and a half, scores of development projects have followed the Speedway — including the nearby Hollywood Casino.

A high-end gaming facility landing in Wyandotte County was made possible by the 2007 passage of the Kansas Expanded Lottery Act. The measure was passed after years of futile attempts by the gaming industry to lobby Sunflower State lawmakers to allow casinos.
In theory, those auto-racing enthusiasts who had come for the Sprint Cup were supposed to have been able to book a room at a hotel built at Hollywood Casino, where they could have walked a short distance to watch Kyle Busch take the checkered flag. The hotel, planned for completion in 2015, was part of the plan when Penn Gaming and the International Speedway Corporation won a hotly contested bidding war for a gaming license to operate in Wyandotte County in 2009.
Instead, Hollywood Casino pays annual penalties for not having put up the hotel. Last year, the UG received a $1.4 million check from the casino.

The hotel’s absence feels to some residents like another carrot that was dangled before them, another lure to sign off on big development that ultimately doesn’t happen. Schlitterbahn Water Park was supposed to include a hotel. Sporting Park was supposed to encompass several youth-soccer facilities. Neither has been built.

“There were promises made there that were not kept,” Louetta Braswell, director of nonprofit neighborhood group the Leavenworth Road Association, told a recent UG meeting.

Karen Bailey, a spokeswoman for Penn National Gaming, says the discussion of the Woodlands is one reason why Hollywood Casino is holding back on its hotel.

“This market has become completely unstable with this discussion in Topeka,” Bailey tells The Pitch.

The hotel was meant to be more than just an overnight berth for Hollywood Casino gamblers. According to state records, a fully built Hollywood Casino, with 500 hotel rooms, was also supposed to bring the total number of slot machines on the property to 3,000 — more slots than all but one of the other applicants for the gaming license eventually granted to Hollywood Casino. (Hard Rock also envisioned 3,000 slot machines.)

The initial number of slot machines at Hollywood Casino, according to a market study done in 2009 by Wells Gaming Research, was supposed to be 2,300. Hollywood Casino today has 2,000 slots.

Backers of Hollywood Casino point out that the enterprise makes contributions to local school districts and charitable organizations, the county’s parks and recreation department, and the Wyandotte County Chamber of Commerce. Hollywood Casino also throws off a significant chunk of its gaming revenues to state and local government. Under the Kansas Expanded Gaming Act, 27 percent of gaming revenues go to Kansas, while 5 percent goes to the Unified Government.

A 2009 market analysis by Wells Gaming Research projected that Hollywood Casino would make $172 million in 2015. Hollywood Casino itself figured it would haul in $231.3 million. If Hollywood Casino’s projections had panned out, the UG would have received nearly $7 million — or close to $3 million more than what it received in 2015.

According to the same report, Hollywood Casino banked on making $326.8 million in 2015, had the hotel been built. In that case, the UG would have received nearly $10 million in 2015.

When Hollywood Casino applied for the gaming license, it valued the undeveloped property it was built on at $100 million. Hollywood Casino has appealed its taxes every year since it opened and has been successful at knocking down its assessment. Its current taxes are under appeal once again.

“Whether you’re a homeowner or a business owner, you have a right to challenge that assessment,” Bailey says.

Hollywood Casino is hardly unique in this respect, particularly among the large developments in western Wyandotte County, many of which were heavily subsidized by taxpayers. Sporting Park and Nebraska Furniture Mart routinely appeal their property-tax assessments.

“Whatever they [Hollywood Casino] developed, when it came time to pay the taxes, somehow the land wasn’t worth the $100 million,” UG Commissioner Hal Walker tells The Pitch.

Walker didn’t let the Woodlands off the hook on this matter, either.

During a well-attended April 28 meeting of the Unified Government Commission, Walker peppered one of Ruffin’s attorneys with questions on several fronts. One of them was about property-tax appeals.

“Are we going to have this fight with you the minute this thing gets done?” Walker asked. “[If] you get assessed at $70 million — maybe that’s not the actual number, but let’s say that it is — and we tax you at $70 million, are you guys going to go to tax court right away and say that because you’re close to Wyandotte County Lake that you might get flooded and nobody else would buy it or some other kind of absurdity?”

Scott Beeler, a Lathrop & Gage lawyer who is one top hat and cane away from looking like Monopoly’s Rich Uncle Pennybags, did not indulge Walker.

“Certainly, no, I couldn’t commit that my client wouldn’t ask to pay taxes based on their properly assessed valuation,” Beeler responded. “Nor would anyone do that.”

Beeler contends that the Woodlands property, in its current derelict state, pays $187,000 in property taxes, while a renovated facility might reach $1.8 million or more.

Ruffin’s planned $75 million investment — Beeler says it will probably be more — to fix up the Woodlands would allow horses about 60 days a year, while visitors could play up to 750 electronic slot machines year-round.

But there are strings attached to Ruffin’s plan, primarily a change in legislation to cut the tax rate on race tracks like the Woodlands. That tax rate today is 60 percent on electronic-gaming revenue. Beeler says Ruffin won’t reopen the Woodlands until those rates drop.

The UG has expressed reservations about Ruffin’s plan. UG spokesman Mike Taylor told The Kansas City Star last year that re-opening the Woodlands “could even be harmful” to the county. Still, the UG has softened its stance since last year; Taylor now says the UG is fine with the Woodlands, as long as it pays an equal share to the local government. One bill in Topeka sought to cut the local government tax rate on revenue at racing facilities from 3 percent to 2 percent.

“We wanted something that was a little more in line with what Hollywood wanted to keep that local level fair,” Taylor tells The Pitch.
What accounts for the UG’s new stance on the Woodlands?

“Hollywood got really angry with us,” Taylor says. “They said, ‘You want to change everything. You’re abandoning us.’ We’re not abandoning [Hollywood] … But we realized the political dynamic was shifting, so we couldn’t keep saying no to the Woodlands reopening.”

Taylor says the UG is hoping that the Woodlands becomes something more than just a race track and a slots parlor. “Mixed-use, something that would actually draw tourists rather than siphoning people off from Hollywood,” he says. “That’s our concern.”

It may not be a concern soon. The Kansas Legislature ended its annual session without taking up the racing legislation.

There’s a possibility that lawmakers could return to work if the Kansas Supreme Court rules that their K-12 school-funding plan doesn’t square with constitutional requirements. But if that happens, lawmakers will likely be too busy with a financial crisis to make friends with gaming facilities.