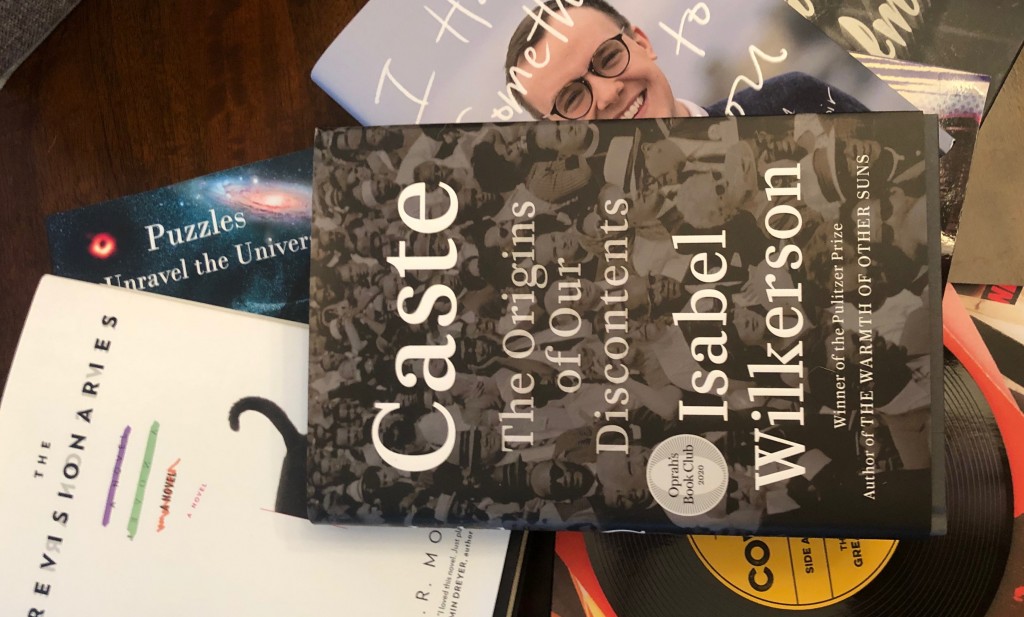 Some hits. // Photo by Brock Wilbur

Everything might be terrible outside, but there are still new books. Whether you’re looking for some haunt in your October—deals with the devil, creepy neighbors, spirits out for vengeance—or would rather keep your feet squarely in the world of realism, we got you. Here’s our most anticipated new novels coming out this month.

The Invisible Life of Addie LaRue by V.E. Schwab (October 6)

If you’re a fan of wishes-gone-wrong stories, this new historical fantasy by the prolific V.E. Schwab is or you. The titular LaRue’s deal with the devil gives her immortality with the cost that no one she meets will remember her for more than a few moments. Until, after centuries of loneliness, someone does. This page-turner, layered with suspense and romance, also is the #1 LibraryReads pick for October, as selected by librarians across the country.

Leave the World Behind by Rumaan Alam (October 6)

A thriller that starts with black owners of a Hamptons Airbnb appearing on the doorstep to their vacationing white guests, amidst some apocalyptic crisis. Prejudices bubble up; tension ripens. Appearing on just about every most-anticipated-books list this fall, the movie rights have already been secured by Netflix, set to star Julia Roberts and Denzel Washington, with Sam Esmail at the helm. Everyone might be talking about this one next year, get ahead of the curve and pick it up now.

Natsuki thinks she’s adopted, wondering if perhaps her family isn’t her real family. She wonders if maybe, in fact, she’s not from this Earth at all. This offbeat, psychological coming-of-age story explores how it feels to be an outsider. This is Murata’s 12th book, though only the second to be translated into English, after her quirky & well-received novel Convenience Store Woman.

The Searcher by Tana French (October 6)

If you’re a fan of slow-burn crime fiction, I probably don’t need to tell you about Tana French. But just in case any mystery fans out there haven’t yet cracked the spine on one of her novels:

Her police procedurals have deeply drawn characters, a dark and disturbing undercurrent, and a richly layered story.

Alright, look: “military fiction” ranks pretty low on what I want to read. But this book is getting a lot of buzz; it shouldn’t be overlooked just for its broad genre label. Klay’s debut novel won the National Book Award in 2014. The story is said to address the way wars impact the lives of everyone in their proximity. The novel follows a U.S. Special Forces medic, a journalist, a Colombian officer, and a local Colombia militiaman. A.L. Kennedy’s blurb really sells it: “Missionaries is an urgent, detailed, compassionate and quietly furious novel about America and her Forever Wars. Intensely readable, exciting, funny and heartbreaking–it will change you.” So, fine, maybe I’ll read some military fiction. I might even enjoy it.

In this fantastical novella, the history of the Ku Klux Klan is rewritten with a supernatural twist. A Black bootlegger in the 1920s draws upon spirits to seek justice for her family. Recommended for those currently watching Lovecraft Country, where racism shows up as horror unto itself. P. Djeli Clark is a lowkey gem in the world of speculative fiction, winning awards for his short stories and novellas, the most recent of which, Black God’s Drums, is the most bonkers romp of magical alternative history I’ve ever read. Do yourself a favor and pick up this book.

The Once and Future Witches by Alix Harrow (October 13)

In 1893, in Harrow’s rich and compelling world, witchcraft has been thoroughly stamped out by witch burnings earlier in the century. As three sisters join the movement for women’s suffrage, they also find themselves connecting with magic that had been thought long dead. A fitting release as this year celebrates the centennial of the women’s vote in the US, and an enchanting read for those who like sprinklings of history, folklore, and politics in their escapism.

Two young train-hopping brothers get involved with the free speech riots in Spokane and fall for a vaudeville singer with a cougar. Jess Walter’s gritty new novel has a colorful cast of characters bringing the early 20th century to vivid life. I can’t say it better than Anthony Doerr: “The Cold Millions is a literary unicorn: a book about socioeconomic disparity that’s also a page-turner, a postmodern experiment that reads like a potboiler, and a beautiful, lyric hymn to the power of social unrest in American history.”