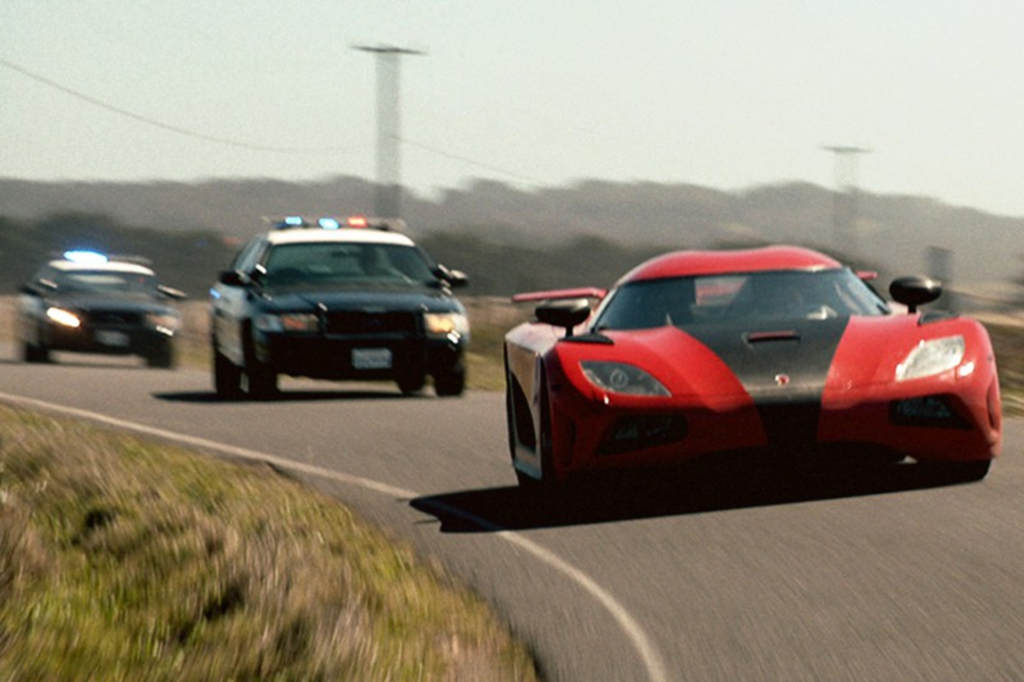 Blazing across the screen like a comet of incompetence, Need for Speed is an actioner so dumb that it numbs your mind. As much as the movie wants to be an entertaining pileup of car chases and awesome crashes, its brazen soullessness is impossible to shake off. I’ve never seen a movie so cool with its own overwhelming idiocy.

Based on a video-game series, Speed casts Breaking Bad‘s Aaron Paul, trying desperately to appear Steve McQueen-ish as Tobey, a street-racing mechanic/ex-con who goes on a cross-country tear to clear his name and avenge the death of one of his friends. This is all thanks to nefarious rival Dino Brewster (an accent-free Dominic Cooper, playing the sort of baddie who’s evil for no reason other than the story just demands it).

Brewster sends our hero up the river when the pair, along with Tobey’s buddy, stage an impromptu race that ends with Brewster landing that buddy’s car into a soon-to-be-fiery tailspin. With Brewster’s car nowhere in sight, a grieving Tobey takes the fall. (This has to be the dumbest way I’ve ever seen a character framed in a movie, with the race mostly happening in broad daylight on a highway full of witnesses.)

From here, the brain-dead plotting pours on useless effort. Paul’s retribution-seeking racer gets out of jail and goes on the road, committing a series of high-speed pursuits just to get invited to an elite road-rage rally. It’s organized by Monarch (a mad-dog Michael Keaton in smartass mode), a recluse with a call-in Web show that everyone apparently watches. And it just so happens that Brewster is the chief competitor.

From that convoluted setup, you might think the movie is woefully overwritten by John Gatins (Flight, Real Steel) and his brother, George. Surprise! It’s actually woefully underwritten, even for a live-action version of a video game. In place of anything that upgrades the characters from one-dimensional to two, the script offers only filler to appease audiences until the next car chase. When Tobey summons his old crew (which includes skinny-jeans-wearing rapper Scott “Kid Cudi” Mescudi as his plane-flying eye in the sky), one of them starts taking off his clothes at his job because – hey, it’s funny seeing a dude walk around butt-bald-nekkid in an office building, right?

You’d assume that Speed, with its high-octane storyline and themes of honor and family, was ripping off the Fast and the Furious movies. But Speed is one big valentine to the car movies of the ’70s. The ghosts of both Hal Needham and H.B. Halicki loom heavily over this flick, as director Scott Waugh (Act of Valor) and company use several of those filmmakers’ trusted tropes. Hell, Paul’s *Bandit even has his own Sally Field: Imogen Poots as a chatty British lass who awkwardly tags along for the ride.

I wish this movie were half as entertaining as those films from back in the day. Unfortunately, with its 130-minute length, painfully extended narrative, nonsensical chase scenes, and complete disregard for common sense, the only Vanishing Point here is Need for Speed‘s head – up its own $66 million-budget ass.