Legend of the Prairie Punks 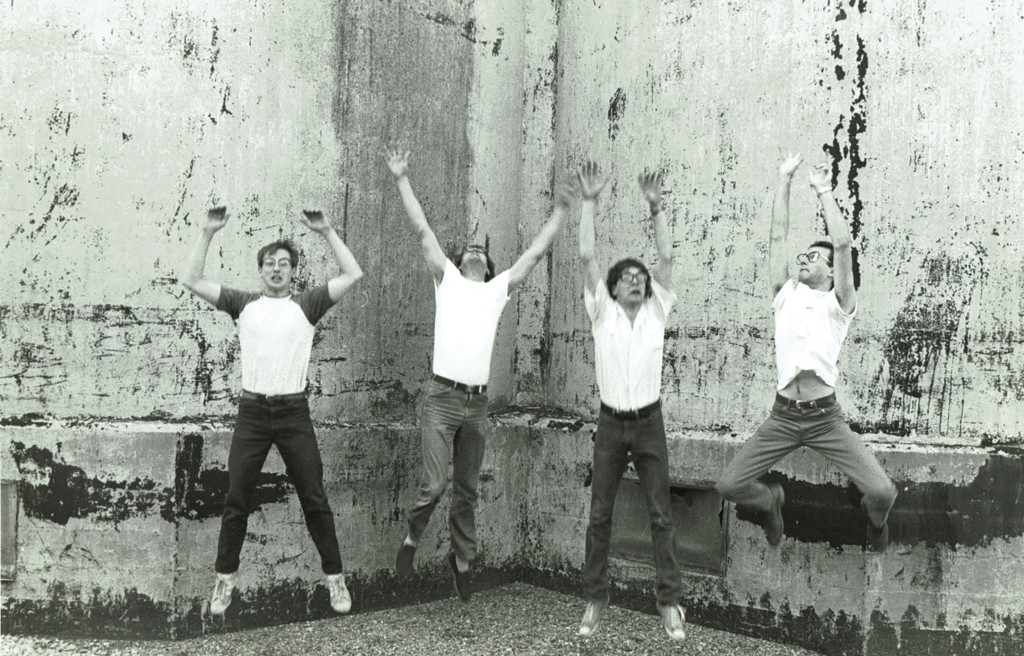 The Embarrassment. // Photo by Doug Hitchcock

Once upon a time in Wichita, there was a band called The Embarrassment. In 1979, guitarist Bill Goffrier, vocalist John Nichols, bassist Ron Klaus, and drummer Brent “Woody” Geissman formed a quartet that, over the course of five years, went from playing shows in backyards and a studio in Wichita’s now-abandoned Flatiron Building to touring with the likes of John Cale and the Ramones.

The Embarrassment brought major players to Lawrence’s punk scene in the 80s, with a sound somewhere between the danceable proto-punk of Jonathan Richman and The Feelies and the college-friendly power pop of The dB’—with a bespectacled art-nerd look to match.

The band had a devoted underground following outside Kansas as well. Stop Making Sense director Jonathan Demme even shopped them around for record deals. In 1983, the ride stopped almost as suddenly as it started. The band was done.

The sands of time have all but buried mainstream knowledge of The Embarrassment, but the band’s cadre of die-hard fans refuse to let them go. “It’s the band that no one will let die,” Geissman says. “I’m grateful that our fans keep those memories and the music alive.”

Journalist and historian Thomas Frank quoted The Embarrassment’s lyrics in his now-classic book What’s the Matter with Kansas? Legendary rock critic Robert Christgau once called them a “great lost American band.” With online streaming making even the most obscure music accessible to new audiences, the writing’s on the wall: it’s time for an Embarrassment revival.

Right on time (if you discount a 17-year production history) comes Dan Fetherston and Danny Szlauderbach’s documentary We Were Famous, You Don’t Remember: The Embarrassment, which charts the rise and fall of the band and the lasting impact their fleeting career had on music in the early 80s.

The film, which premieres at Wichita’s Tallgrass film festival this fall, represents a labor of love and a surprising collaboration that traversed geography, generations, and technological advancements. 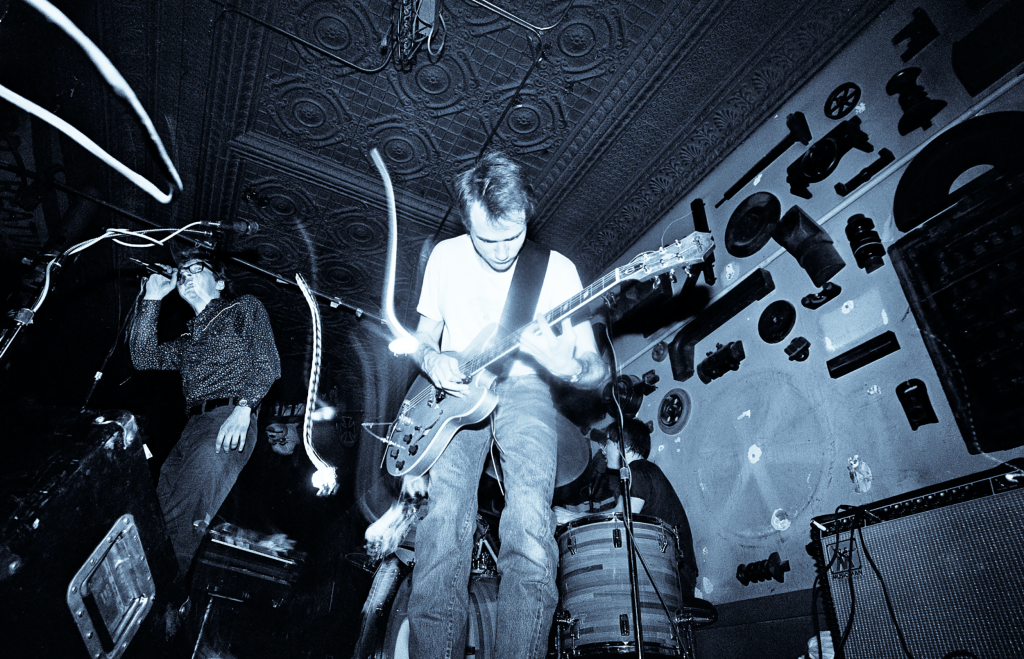 Fetherston, a New York-based musician-turned filmmaker, and editor, first discovered The Embarrassment in the late 90s.

“It was the era of the CD, when all these amazing things were being excavated for the first time, lovingly curated by archival record labels,” Fetherston recalls. “There was a big late 70s, early 80s music revival happening in New York. I found The Embarrassment and fell in love. My band covered one of their songs, and I couldn’t get them out of my head.”

Compelled by The Embarrassment’s music and folk-hero mythos, Fetherston started interviewing band members in 2005. Those interviews make up early portions of We Were Famous. But as a touring musician himself at the time with his band Oxford Collapse, the project started getting away from him.

“We would be on tour for six months and I couldn’t work on it. Technology changed. I’d started shooting on mini DV, and then DSLR happened,” Fetherston says. “My footage looked really old. I thought the movie was dead.”

Then, in 2019, Fetherston got a call from Szlauderbach.

Growing up in Wichita, Szlauderbach’s older brother introduced him to the band’s music at an influential age. “I think it was Heyday, their compilation album that I first heard, but I also saw this black and white photo of them in the Flatiron,” Szlauderbach says. “There was something about this photo of them, and the sound of their music that just said ‘This is what indie feels like.’ After I graduated from KU, I thought if I ever got serious about filmmaking, I’d want to make a movie about The Embarrassment.”

In 2016, Szlauderbach learned the band’s former manager, Dan Rouser, still lived in Wichita. He called him up with plans to propose a documentary of his own on the band, only to learn from Rouser about Fetherston’s project.

“I realized I couldn’t travel around and talk to all the people Dan had,” Szlauderbach says. “I called him up to see if we could combine forces.” The pair then collaborated on a 10-minute short film to commemorate the band’s induction into the Kansas Music Hall of Fame, which in turn led to them sharing, in Szlauderbach’s words, “countless gigabytes of stuff we’d shot.” Following a successful Kickstarter campaign, they started work on the film in earnest.

“We both have this love for this super specific, idiosyncratic band, so it’s not surprising we were on the same wavelength,” he says.

Szlauderbach adds that the advancements in technology since Fetherston started shooting the film allowed them to pull content together in unexpected ways. “We were able to make this without even meeting face to face. It’s not a given that if you just call someone up that they’ll be cool and just collaborate,” Szlauderbach says. “I’m surprised and grateful.” 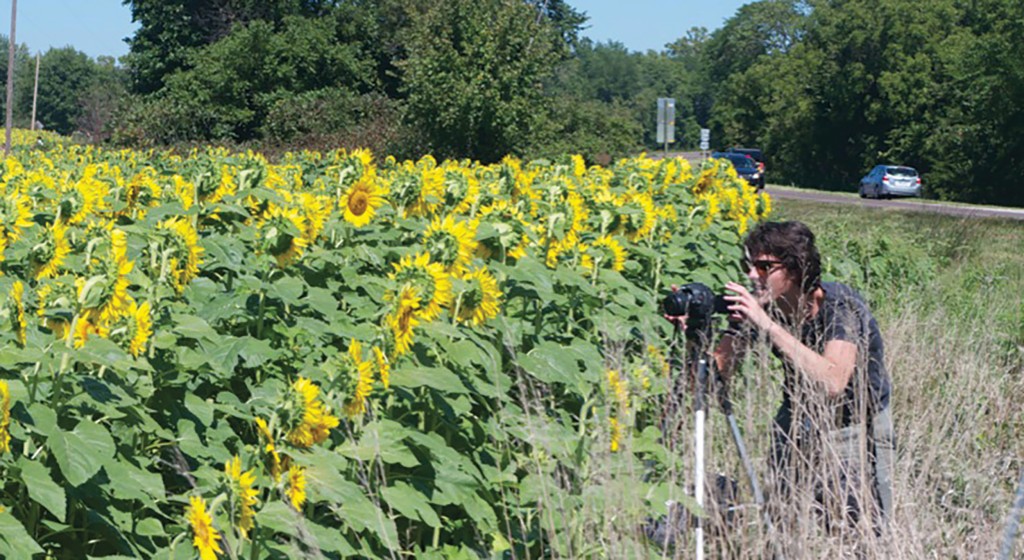 The story of a beloved local band that nearly made it big is hardly unique—it exists in countless essay collections, regional music anthologies, dramatic films and, yes, documentaries. Szlauderbach says what made The Embarrassment worthy of their own movie was the specificity of their location and artistic identity.

“So many other people had that question about them. How does a band like this come out of a place like Kansas?” Szlauderbach asks.

It also helped that there were heaps of quality archival footage to sift through.

“A lot of bands from this era have limited footage, but several music videos, good live footage, I think it’s pretty rare for bands from this era,” Szlauderbach says. “They’re all visual artists as well. Bill Goffrier is a painter, and even shot legitimately good, striking movies as a teenager. More and more reasons popped up as to why this would be a good movie.”

Fetherston admits his interest in making a film was selfish. “I had this realization that I wanted to watch all of that footage myself,” he says. “We’re spoiled by YouTube now, but when I started making the movie there was this mystery in that you know these shows happened, but there was no way of seeing it without trading illegal VHS tapes and DVDs. I’d have friends come over and we’d watch their Flatiron concerts in their entirety.”

Looking at the concert clips and DIY music videos that make up much of We Were Famous, it’s easy to see why anyone would get hooked—there’s loose, youthful energy to it all that evokes the feeling of seeing your friend’s band play in college. The difference, though, is that The Embarrassment sounds better, even without production polish.

Take the video for their song “Celebrity Art Party” as an example. Nichols delivers sly lyrics from behind blocky horn-rimmed glasses while a goofily grimacing, lei-adorned Goffrier pounds out complex guitar riffs and Klaus nonchalantly chugs a beer between galloping basslines. Geissman is keeping up with a frantic rhythm that lesser drummers would trip over like a hapless nerd with loose shoelaces.

It’s not a great video; it looks like the band just grabbed some props out of a closet and captured a quick recording session in a cramped room. But the appeal is obvious: you want to be friends with these guys.

All of that, Goffrier says, is the result of extensive trial and error on the band’s part. “We had to learn a lot of this on the fly, and none of us were formally trained in anything like songwriting,” he says. “But being as we had such a love for songwriting and popular songs, we wanted to follow that same path.”

According to Geissman, however, the chemistry is natural. “We really trusted each other in terms of delivering what I always felt was a powerful performance,” Geissman says. “But it was kind of brotherhood to me. I mean, here we are years later and we’re all still very close.” 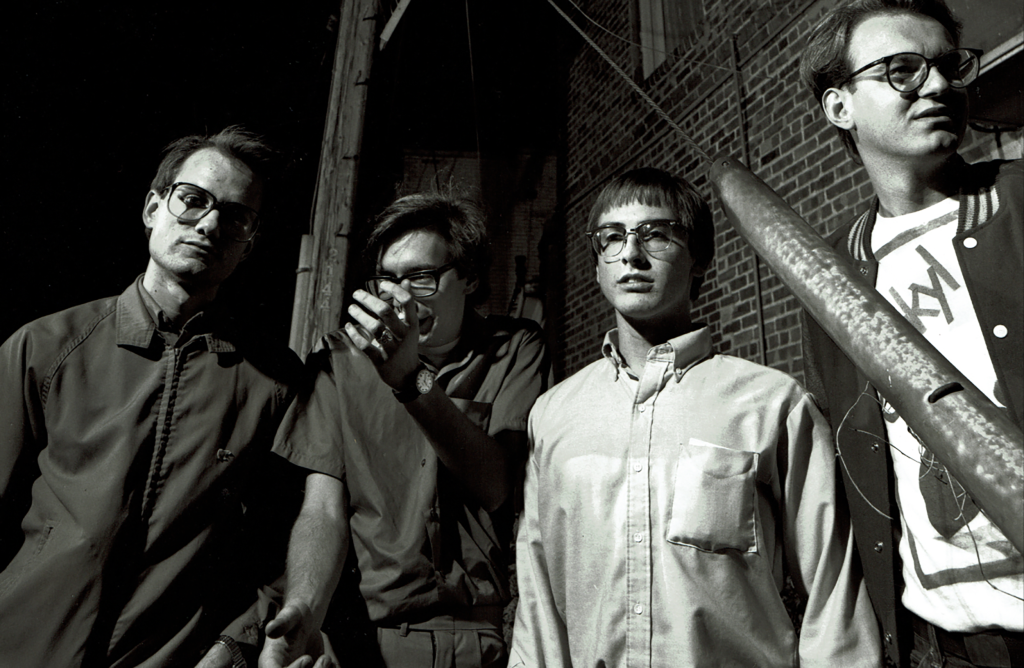 The Embarrassment. // Photo by Mike Fizer

“You guys deserve this.”

In September, Tallgrass will celebrate the premiere of We Were Famous, You Don’t Remember: The Embarrassment at Wichita’s historic Orpheum Theater, alongside a reunion show and a few other surprises.

“I’m glad the story of some of Wichita’s own will get the time and attention it deserves this year,” Andre Seward, the festival’s programming director, says. “It’s a perfect fit to celebrate 20 years of stubborn independence.”

Goffrier says it’s an honor to have his band’s legacy embraced in his hometown. “I feel lucky to be here at the right time when this can happen, and I’m hoping as many of the band’s friends and followers can be here for that gathering. It’s a once-in-a-lifetime occasion.”

Szlauderbach says he sees it as an opportunity to give back to the community that helped him discover music he loves. “This was where I discovered The Embarrassment, but also the Clash and the Velvet Underground,” he says. “For me, it’s all jumbled up together as a discovery of music that was important to me for the rest of my life. I can’t wait to give back and honor that time in my life.”

The similarities between the band and Szlauderbach and Fetherston’s winding road to the finish aren’t lost on the band’s members, either. “I think these guys put a lot of work into the movie, so I anticipate some real fireworks,” Geissman says. “In the spirit of The Embarrassment, if you don’t give up and you keep working at it, something good’s gonna come out of it.”