The Creeping, When the Screaming Starts, Woodland Grey, and The Chamber of Terror. 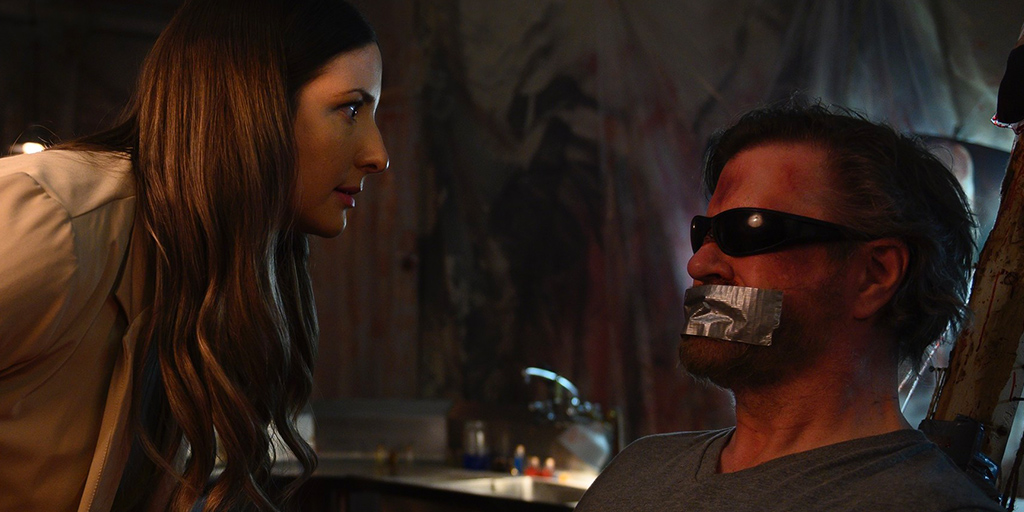 As one of several films making big screen debuts at Panic Fest, The Creeping puts a modern spin on what is essentially a classic ghost story. It’s even set in the English countryside, which it uses to wring familial melodrama and spooky jump scares out of what could otherwise be a threadbare tale.

The resulting film isn’t going to stake out any new territory, but it still spins its yarn with a confident assurance that reminds us why the old ghost stories still make the hair on the backs of our necks stand up.

Chalk this up to the light touch of director Jamie Hooper, making his feature debut after a string of shorts and strong performances from a capable cast, both young and old—not to mention an interesting, if traditional ghost design.

Several recent horror pictures have mined scares from dementia and caring for elderly parents (The Taking of Deborah Logan, The Relic, and many more examples spring to mind). The Creeping takes its place among their number by never trying to outdo them. Instead, it tells its story directly and solidly without a lot of bells and whistles.

In this way, the film manages something that many other haunting movies have missed—making us care about what’s happening to these people, rather than merely waiting for the next thing to jump out and go “boo!”

When the Screaming Starts

Just from reading this film’s logline, you could expect something more along the lines of Behind the Mask. Instead, it aims to be What We Do in the Shadows but for serial killers instead of vampires.

As a feature directorial debut from actor Conor Boru (Hold the Dark), everything about When the Screaming Starts echoes that show’s approach—from the faux-documentary setup to its “inclusive” Manson family of quirky characters representing different archetypes.

Naturally, a faux-doc latecomer like this is unlikely to ever reach the subgenre’s highest points, but When the Screaming Starts is still a charming confection that at least tries to interrogate the ethics of our fascination with true crime stories.

When watching several new films in a row, as one does at Panic Fest, patterns begin to emerge, such as two-shots. Many of the 2022 fest films are essentially two-person shows; easy to film on a tight budget within the limitations of the pandemic. In the case of Woodland Grey, there’s an added benefit: most of the movie takes place outside.

The titular woods become a character in the story. The tall, grey tree trunks forming a haunting backdrop to the action of pale ghosts, behind which more actual ghosts can hide.

Like a lot of quiet and “elevated” horror films of the past few years, Woodland Grey is preoccupied with grief, which makes sense. We’ve all lost something in the last few years.

The film’s characters are haunted by what they’ve lost and by the things they’ve done, trapped in an endlessly repeating cycle. Are the woods a physical, escapable place? Or are the protagonists in purgatory?

The ambiguous ending may be haunting or disappointing, depending on your own predilections, but the journey is beautifully staged and performed with commitment and sincerity.

The Chamber of Terror

The Chamber of Terror, an online-only screening at Panic Fest, aims to be this year’s Wolfcop. It can be said with some certainty, since the film itself makes the comparison, referencing Wolfcop near the beginning

The Chamber of Terror is, like Wolfcop, an irreverent, foul-mouthed comedy soaked in lots of cartoonish gore. The plot revolves around a crime family so epically dysfunctional they make the average Coen brothers characters seem on top of their games.

Opposing them is a tough antihero protagonist by the name of Mr. Nash (F*cking) Caruthers, who previously appeared in short films by writer and director Michael Pereira. Psycho Goreman’s Timothy Paul McCarthy plays Caruthers like a parody of Snake Plissken, the kind of guy who wears sunglasses literally all the time and headbutts a ghost to death.

While Caruthers is there for revenge, he’s also inadvertently found his way into something bigger than he bargained for as the events in the eponymous “Chamber of Terror” spiral into something supernatural. Before all is said and done, there are ghosts and revenants alongside the hapless criminals, keeping the audience wrongfooted until the credits roll.