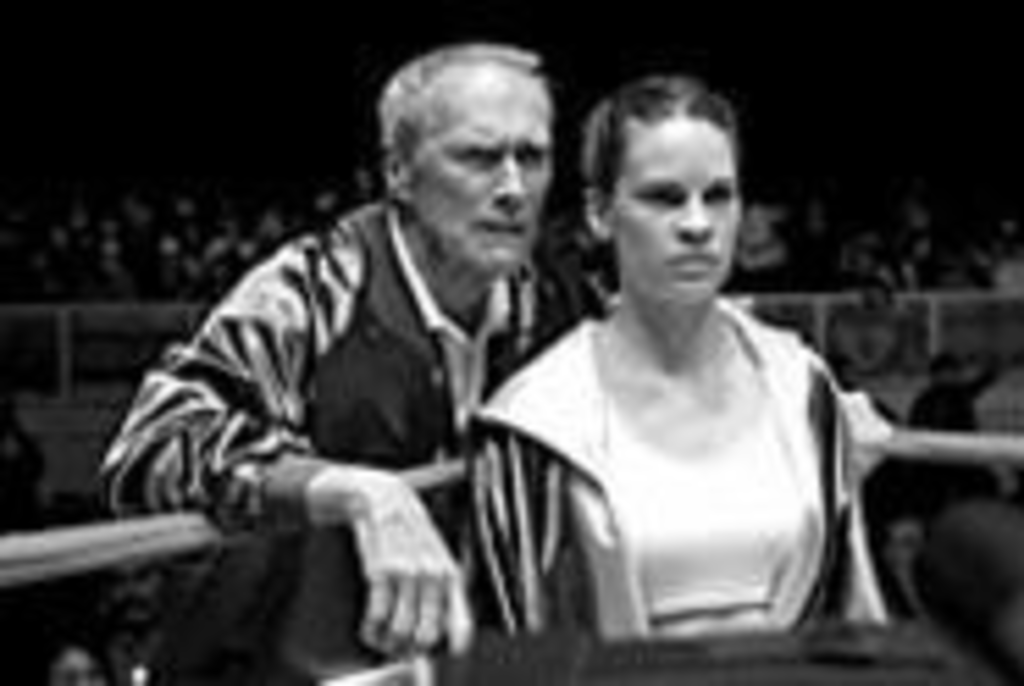 Clint Eastwood began digging into the third act of his career — the one that reveals the mature, deep-thinking artist . . . with a little jazz piano on the side — a dozen years ago, with the discomfiting anti-Western Unforgiven. Since then, he’s hardly come up for air or given himself a break. Last year’s Mystic River was certainly his most serious, multilayered film to date, a harrowing meditation on the tug of loyalty and the consequences of violence that showed us, in no uncertain terms, what he has become (or what he wants us to see) — a reflective superstar who’s evolved into an uneasy moralist with a true gift for drama and second thoughts about his own past. You know: Dirty Harry in active retirement, cringing here and there about all that gunfire and revenge.

This not-altogether-flattering urge to self-examination and spiritual inquiry continues with Million Dollar Baby, on which Eastwood once more serves as producer, director and lead actor — the whole Wellesian ball of wax. On the surface, it’s a boxing movie shot in grim, desaturated tones with a conventional plot and stock characters: A broken-down Los Angeles fight trainer with gnawing secrets reluctantly takes on a raw but courageous champ-in-the-making, and while rising fast in the game they both get a shot at redemption. John Garfield could tell you the same story; so could Sylvester Stallone (four or five times). Of such stuff are boxing movies made. Just keep the arena clouded in cigar smoke and spatter the combatants with blood every three rounds.

But Eastwood lost patience with surface and convention a long time ago, and he’s nothing if not a reacher. So from the moment its oblique, ironic title appears on the screen until we’re blindsided by what follows almost two hours later, we see that Million Dollar Baby is not a fight movie at all but another meditation on conscience. Eastwood’s carefully constructed character, a gravel-voiced, gimp-legged old gym rat named Frankie Dunn, carries so much baggage into the ring that he practically needs a bellhop: He’s a tormented Irish Catholic who reads Yeats poems, goes to Mass every day and delights in yanking his parish priest’s chain. Frankie broke with his only child, a daughter named Katy, decades ago, and he’s never gotten over that crisis of faith. Graham Greene this is not, but it’ll do. Paul Haggis’ screenplay, cut and pasted from a collection of short stories, Rope Burns, by a retired corner man named F.X. Toole, stinks of liniment when it needs to (“Boxing is about respect — gettin’ it for yourself and takin’ it from the other guy”), but it’s really about Frankie trying to reclaim fatherhood.

In this 21st century, it should come as little shock that the grizzled trainer’s hard-hitting protégé is a woman — a 31-year-old woman at that. Many traditional fight fans see female boxing as a freak show sweetened with a touch of pornographic fantasy. Who cares what they think. The old school is losing its alumni fast to age and infirmity, and for Eastwood’s purposes, a woman fighter is perfect — especially one played by the extraordinarily talented Hilary Swank, who took home an Oscar for Boys Don’t Cry. Without leaning too heavily on whatever she’s seen in Rocky or Requiem for a Heavyweight, Swank convinces us not only that her Maggie Fitzgerald is abused trailer trash who grew up hard in the Ozarks (perfect accent) but also that she, just like every other feisty, give-me-no-charity pug who ever glimpsed a ray of light, means to punch her way to freedom. There’s nothing sappy or false or fake-athletic in here: Swank used no fight doubles, and we learn some boxing skills as Frankie teaches them to her. Swank jumps rope beautifully, smashes the heavy bag with authority and starches her opponents with spirit. More important, she gives off the relentless hunger and heart that every fighter needs. When her hard work inside Frankie’s scummy, ill-lighted gym starts to pay off, we believe it.

It wouldn’t do to say more about the powerful surrogate-daughter, surrogate-father element of Million Dollar Baby, and you must discover its pivotal heartbreak for yourself. Meanwhile, devotees of aphorism will find it aplenty in the familiar type played here by Morgan Freeman. His Scrap is a canny old boxer who lost an eye years and years ago (that was Frankie’s fault) in his 109th and final fight and now shows a few things to the young hopefuls at the gym before bedding down for the night in the back room. As you might expect, world-weary wisdom is his strong suit, and he dispenses it in great gobs (“Some wounds are too deep and too close to the bone”) as Baby‘s voice-over narrator. A too-convenient dramatic device? Probably.

That aside, it’s difficult not to admire Eastwood’s dogged pursuit of real life and authentic emotion. Baby may not be quite as compelling as Mystic River or Unforgiven, but there’s something so stirring and disquieting in his quest that we cannot help but pay close attention to him. In his long career’s third act, he’s still searching with striking resolve for the secrets in things. You certainly can’t ask more than that of any 75-year-old ex-gunslinger.