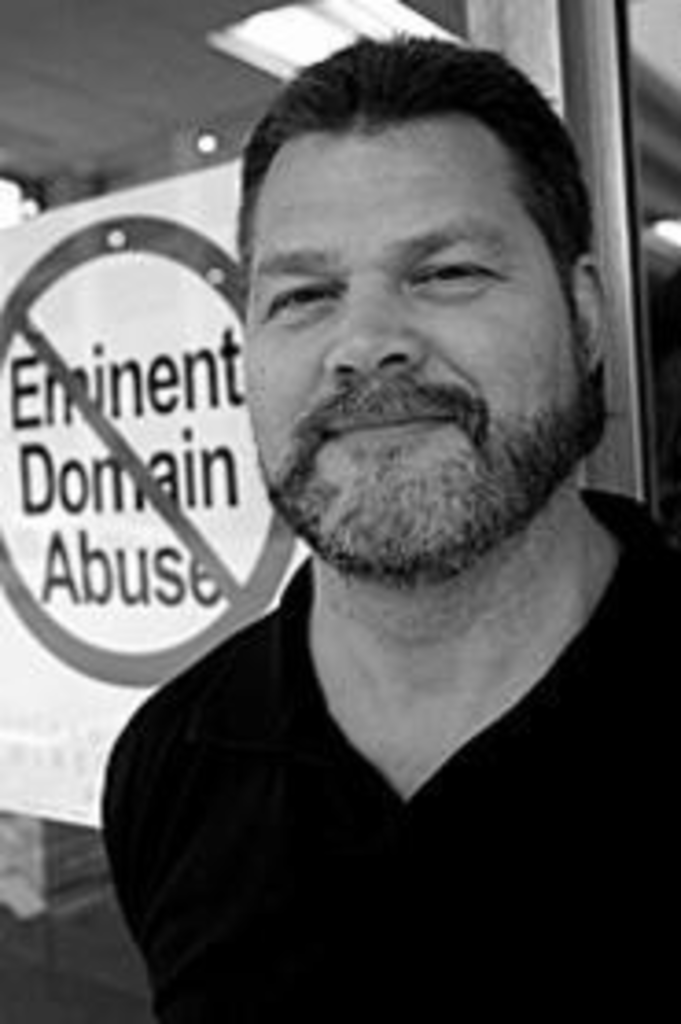 On November 15, Thomas got an offer from the city of Kansas City, Missouri, for the land where Justrite has stood since 1959. The city wants the parcel to accommodate the Sprint Center, the new arena to be built using the proceeds of tax increases on hotels and rental cars that voters approved in August.

Thomas’ unhappiness with the city’s bid comes as no surprise. He opposed the arena plan, just as he opposed the Power & Light entertainment district when it was on the ballot in 1998, and just as he opposed light rail in 2001. Thomas resisted these efforts because he feared they would lead to condemnation proceedings. Justrite is a modest business in a scraggly section of downtown, and modest businesses in scraggly sections of town tend to get demolished in grand redevelopment schemes.

Thomas, who wears a beard and works in bluejeans, wants to stay put and run the business the way he has since he took over from his father, who bought Justrite in 1979. “I make enough money not to have to move and not to have to work weekends,” he says.

A move looks inevitable, though. The city told Thomas that he had seven days to accept the offer; if he didn’t, the city would attempt to seize his property using its power of eminent domain. “We’re going to acquire it,” City Manager Wayne Cauthen flatly told the Pitch just days before the offer was mailed to Thomas.

Cauthen’s blunt appraisal of the situation is emblematic of the way the city and its surrogates have gone about putting together property in the south loop, Thomas and other property owners say. In addition to securing space for an arena, the city has acquired land for the new H&R Block headquarters, which is under construction, and is nearly finished assembling the blocks for an entertainment district. These projects are getting public help through tax-increment financing; when they’re finished, the taxes they generate will pay for the cost of land acquisition and other infrastructure.

But as the city brings rise to near ruin, Thomas and others complain that an unfeeling steamroller is flattening their small businesses.

Darren Siegel, who owns a three-story building at 1319 Grand that’s home to an all-ages nightclub called the Stray Cat, says he struggled to find any official who could tell him whether his property was in line for the wrecking ball. Siegel first called the city-funded Economic Development Corporation. From there, he says, he was directed to the City Planning and Development Department, which told him to call Mayor Kay Barnes’ office, which told him to call the Economic Development Corporation.

A letter from the city finally arrived on September 20, informing Siegel that his property stood in the way of the new arena.

Siegel’s offer arrived at the same time as Thomas’ did. He, too, felt insulted. Siegel had bought the building in 2001 and spent money restoring its windows, maple floors, exposed brick and tin ceiling. “It [the city’s offer] was more than I paid for it but less than what I have in it, and definitely a long ways from being fair,” Siegel says.

No property owner likes to see his house or business condemned. But the government that invokes the privilege should be gentle, says Doug Patterson, a lawyer who specializes in eminent domain cases.

Patterson credits Mayor Carol Marinovich and the Unified Government of Wyandotte County for offering residents 125 percent of the market value of their homes when they were displaced by the Kansas Speedway. Patterson takes a dimmer view of the Kansas City Tax Increment Financing Commission, the agency amassing land for the H&R Block building and the entertainment district. “The TIF Commission never seems to get it,” Patterson says. “They come up with offers that are offensive.”

The TIF Commission initially offered $299,000 to the owners of American Formal and Bridal, a tuxedo shop on Main Street that was condemned to make way for H&R Block (“Always the Bridesmaid,” August 19). The owners — Ben and Shirley Penner and their son, Daryl Penner — held out and were awarded $593,000 by a judge-appointed commission.

The Penners’ attorney, Rhonda Smiley, represents another property owner in the south loop who was offered $25,000 less than the property’s purchase price two years earlier. “Kansas City comes in with a lowball approach and gives very little consideration to the existing businesses,” she says.

Patterson says the TIF Commission’s offers are especially insulting because the land will be used by private entities. “What kind of message is that? ‘We can’t even pay you what you bought it for — and, oh, by the way, a Planet Hollywood is going where you are,'” he says.

Andi Udris runs the Economic Development Corporation, which administers most of the city’s tax-incentive programs. He rejects the accusation that he and his colleagues have bullied property owners. Udris says that most of the land in the south loop was acquired without acrimony.

As for the Penners, Udris notes that the TIF Commission raised its offer at one point to $750,000. Udris says he feels lucky that it was rejected. “I could see myself losing my job making an offer that was over $100,000 more than what the courts awarded,” he says.

For Paul Thomas of Justrite, the negotiations for his property essentially began a month before the city’s offer arrived in the mail.

On October 13, Thomas and a few of his neighbors attended a meeting of the TIF Commission. The five-person commission meets monthly to consider new and existing TIF plans and to make recommendations to the City Council. On the day that Thomas and Company arrived, the commission was deliberating a proposal to expand the boundaries of the south loop TIF plan to include several additional blocks, including the future location of the arena.

The public is allowed to comment on such proposals. Thomas and his neighbors came not to protest but to present their own plan for developing the northern end of the 1300 block of Grand Boulevard.

They want to build a six-story building on the site. Justrite and other retail outlets would occupy the ground floor; offices and condominiums would take the upper floors, and the ground below would provide parking. An architect had sketched a design. (Thomas tells the Pitch he has spoken to banks about financing.)

Smiley, who now represents Thomas, tried to present the plan to the TIF commissioners.

They wanted no part of it.

The arena had been in the news for months, Chairman Peter Yelorda said. The voters had spoken. The time for Thomas’ idea had passed. Smiley sat down.

The arena had in fact been in the news, but its boundaries were uncertain. A map of the area that appeared in The Kansas City Star in May showed the arena bounded at the north by “13th Terrace” (a street that does not actually exist between Grand and Oak, the arena’s east and west borders). If such a street were created, theoretically, it would leave Justrite standing.

“I’m sitting right in the middle of $1.2 billion in development,” Thomas says.

But Udris says the intention was always to buy off Thomas. Udris says the Justrite parcel was originally targeted by the Cordish Company, the entertainment district’s developer. Later, the arena architects concluded that they needed the land. “The boundary never changed, but the use did,” Udris says.

Smiley faults the city for disregarding what she calls Thomas’ “credible plan,” but Udris says the arena will bring a much greater economic impact. Thomas’ idea, Udris says, “is not the highest and best use for the property.”

Cauthen, meanwhile, is openly cynical about Thomas’ proposal and questions its timing. “I think he wants to jack up the price,” the city manager says.

Why did it take so long for Thomas to come forward with the idea? It’s a valid question, Thomas says, before noting that he’s not a developer by trade. “I’m not getting paid to develop, like they are.”

And for the time being, at least, Thomas is allowed to act on his ideas whenever they come to him. “I still own the property,” he says.