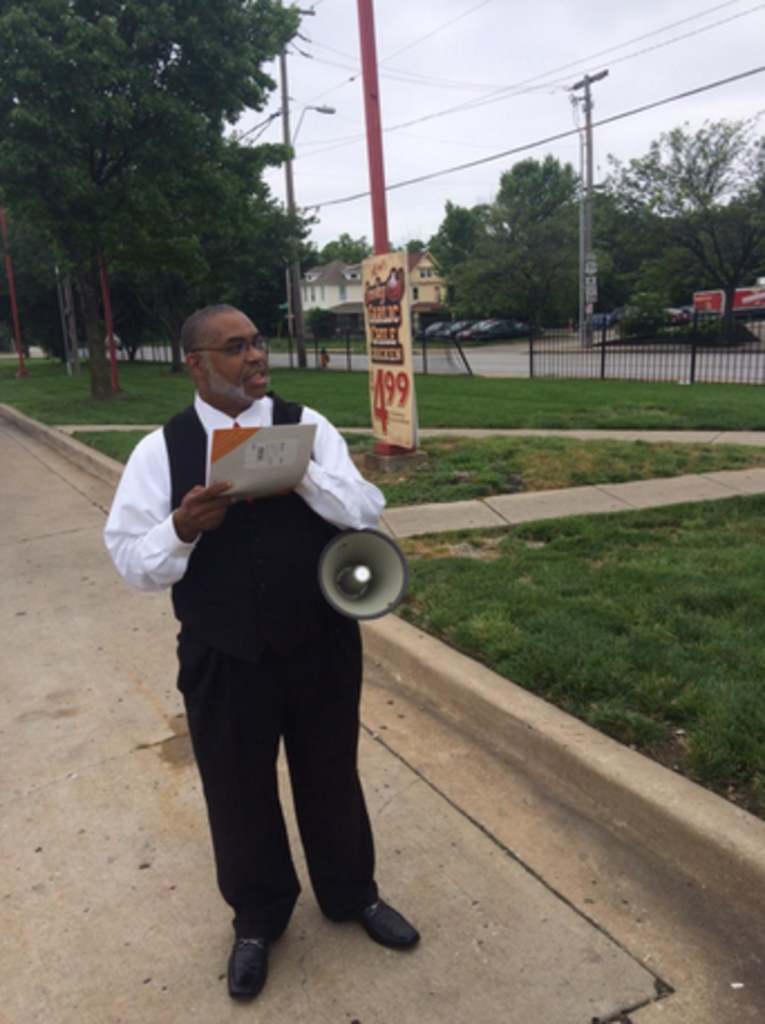 Stephan Gordon said something on Tuesday that made our ears perk up.

The long-shot City Council candidate for Kansas City’s 3rd District at-large held a press conference Tuesday morning at 31st and Prospect. He wanted to float an idea about how to combat blight in Kansas City.

Despite The Pitch being the only media outlet to show up, Gordon delivered his remarks through a bullhorn in front of a Popeyes Louisiana Kitchen location.

Gordon announced a plan to suspend Kansas City’s 1-percent earnings tax in parts of town deemed blighted. Gordon thinks that exempting businesses and their employees from earnings taxes for at least three years will allow investment to flourish in previously downtrodden areas. Businesses would only have to commit to sticking around one of these zones for 10 years to gain the temporary break from the earnings tax.

It’s an unusual and perhaps impracticable idea. For one thing, Gordon couldn’t define what constituted blight. That’s a recurring problem in Kansas City. The concept of blight is so squishy, development lawyers have been able to convince elected officials that places like the Plaza and undeveloped grassland along Interstate 435 are blighted, allowing them to qualify for development incentives.

If Gordon’s plan gained traction without a real definition of blight, we can only imagine how many businesses would find peeling linoleum in their buildings in order to attempt to escape the earnings tax.

Besides, what really caught our attention wasn’t the blight plan by itself. No, it was Gordon’s claim that fellow council candidates Katheryn Shields and Lee Barnes supported his earnings-tax idea.

We’ve learned that Gordon plays fast and loose when it comes to his claims that people back him or his ideas. He told us about a month ago that real estate agent Forestine Beasley had endorsed his candidacy after she finished last in April’s 3rd District at-large primary. Beasley told us she hadn’t.

When Gordon’s press conference ended, we called Shields to ask whether she, in fact, stood behind Gordon’s big idea.

Shields told us that Gordon mentioned to her on Saturday that he was holding a press conference but nothing else.

“He never shared the idea with me,” Shields says. “He said he had some ideas on how to revitalize the central city. I said, ‘Well, I’m anxious to hear what you have to say and see if I could be supportive.’ He never mentioned suspending the earnings tax.”

When we described Gordon’s plan and asked whether it sounded like something she would support, she added, “I don’t believe so.”

Barnes also didn’t recall any conversation about the earnings tax with Gordon, much less supporting the idea.

“I don’t know what his plan is, I’ll just put it that way,” Barnes tells us.

When pressed later about his endorsement claims, Gordon tossed blame around.

“This is campaign season,” he said. “They say one thing one time and something else another time.”

We take Occam’s Razor to Gordon’s last claim. How plausible is it that people tell Gordon they endorse him and his plan but suddenly get cold feet when a reporter calls to verify? Seems far more likely that they didn’t endorse his political wares in the first place.