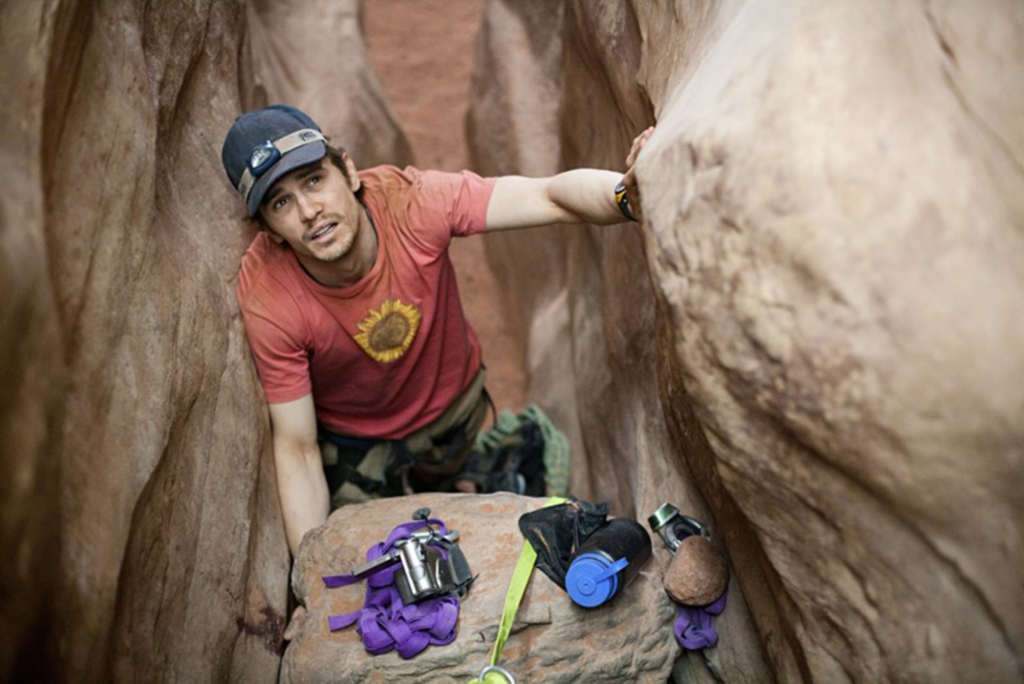 Other people besides James Franco appear in 127 Hours, but because they’re unimportant, they won’t be mentioned in this review. Danny Boyle’s film — based on the story of Aron Ralston, who in 2003 cut off his arm after being stuck for five days under a rock in a Utah canyon — is a one-man show.

Once the boulder drops, about 20 minutes into the movie, and the title appears on the screen like a punch line, we’re stuck in that canyon with Franco. We’re as dependent on him for our moviegoing survival as Ralston is on his dwindling supply of water. At first, this means enduring long sequences of frantic failure as he tries to lift the boulder, push the boulder, pull himself free, straining mightily the whole time. So unbearable is his futility that when Ralston manages the small triumph of picking up a dropped knife with a twig, Franco’s exultant “sweet!” is both mordantly funny and legitimately inspiring.

That scene is emblematic of much of 127 Hours. For most of the film’s middle section, it’s a portrait of American ingenuity, with Franco’s likable, practical performance at its heart. He gets to the arm sawing, sure, but first, Ralston — once an engineer — devises, with the limited tools available to him, clever systems of survival and, he hopes, mechanisms of freedom.

Ralson wraps himself in ropes and a bandanna as the nighttime temperature drops into the 40s. He pees into his camelback, just in case. Soon, he has assembled a complicated pulley system with which he hopes to pull the boulder off himself. All the while, he narrates his predicament into his video camera, a filmmaking device that seems awfully blunt at first but becomes a fascinating window into how a smart, funny, non-action-hero guy might behave as he tries to think his way out of a catastrophe.

Soon enough, we’re navigating through Ralston’s head, and the descent into thirsty delirium begins. “Don’t lose it,” he commands himself, but he does, and his hallucinations and memories — including one jolting cameo from Scooby-Doo — are visceral and affecting. Unlike Boyle’s last movie, the flashback-­dependent Slumdog Millionaire, we’re not meant to draw explicit lines from the past to the present. There’s no scene of a young Ralston learning to tie a double overhand stopper knot. Instead, the glimpses of his past build an impressionistic picture of a young man so devoted to the pursuit of experience that he has left human connection behind. He has built a solitary life and, having never bothered to tell anyone where he was going, is paying the price now.

As Boyle’s film flits from the real world to the world of dreams and delusions, so Franco’s performance transforms, encompassing both universes. In the film’s final act, he’s a man in the throes of panic, dying of thirst but dreaming of drowning. When the time comes for his final stab at freedom, he summons not only the courage and physical strength to saw off his arm but also the last vestiges of his practical former self to work out how to do it.

About that sequence: It’s kind of amazing. It’s really gory and funny and compelling, with sound effects cannily standing in for pain. Despite including several horrible steps that you probably haven’t even imagined, it’s over quickly. But you’d be excused for thinking it takes forever.

The image that sticks with you is not the dull blade slicing through flesh, but Franco, eyes wild, slippery knife held firm in his mouth as he tightens his tourniquet, his cheeks smeared red with blood. It’s a vision of ecstatic violence that brings to my mind, with equal parts sadness and excitement, Heath Ledger as the Joker. With this smartly chosen, intuitively delivered performance, Franco assumes the role previously filled by that risk-taking actor: the serious sex symbol for the thinking movie fan.

And it’s fitting and fascinating that it’s this movie that will likely earn Franco movie-star status. The film that may turn him once and for all into an unapproachable celebrity is itself a passionate, bloody argument for engagement with the world. 