While it is free to ride the bus, only 12.8% of Kansas City’s low-income households are near a transit system. KCATA is working to hire drivers and expand routes. 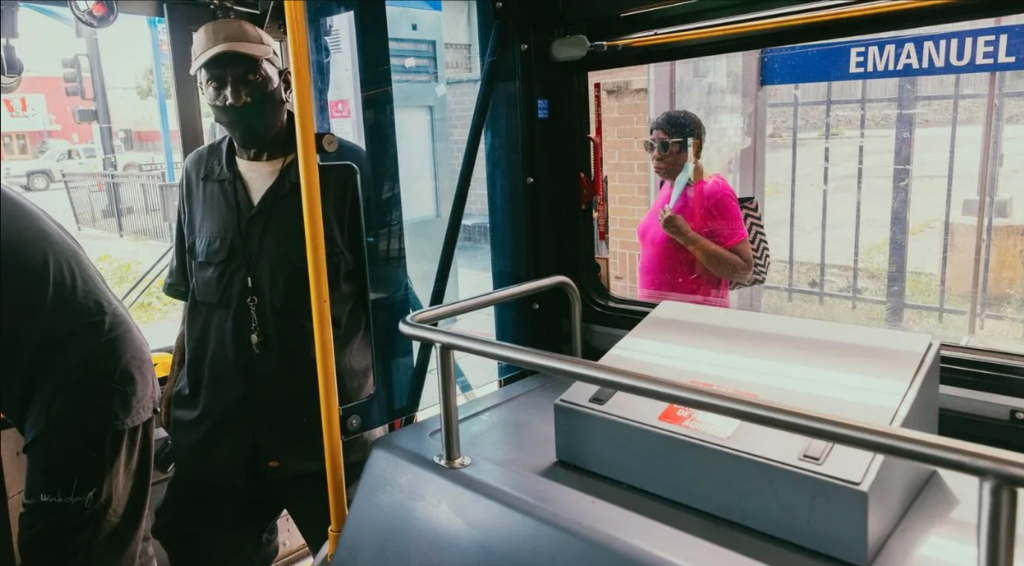 On weekdays, Melissa Douds catches the 35th Street bus at 5:48 a.m. to get to her job as a facility worker at the Bartle Hall Convention Center.

Starting at the Armour and Gillham stop in Hyde Park, she is only seven minutes from work by car, but she does not have a car. Instead, she relies on the bus to get everywhere — including work.

“It normally takes me about anywhere from 30 minutes to an hour depending on if the buses are on time and are dependable, or even show up,” she said.

In 2020, Kansas City became the first major U.S. city to offer free bus fare through a three-year program called ZeroFare KC. And while this milestone helps with transportation accessibility, the Kansas City Area Transportation Authority continues to see decreasing ridership — by approximately 3 million riders from 2019 to 2021, according to data from the KCATA,

Before it was free, the city collected $8 million in fares per year. The city budget has since then dedicated $4.8 million to the transit system, with plans of making up the other half with federal pandemic funds through 2023. After that, KCATA will continue to seek a diversified funding partner to fund ZeroFare KC.

“Due to KCATA’s zero fare program, ridership recovered at a quicker pace than many other transit agencies,” said Cindy Baker, the vice president of marketing, communications and customer service for the KCATA in an email to The Beacon. “Ridership is now 80% of pre-pandemic levels. It is KCATA’s intention to build back service levels as more operators are available.”

While the surge of COVID-19 in spring 2020 contributed to the drop in ridership, the pandemic doesn’t paint the whole picture, especially now. Currently less than 3% of workers in Kansas City — and less than 1% in the metro region — use the bus to commute, according to the Census Reporter.

A city of Kansas City’s size needs more route options. Only 12.8% of low-income households are near a transit system, according to the Center for Neighborhood Technology’s AllTransit database, which measures transit connectivity across the U.S. The city has six transit routes per half mile.

Long wait times, infrequent bus service, complex reroutes and lack of communication negatively impact the bus experience for many riders, especially the ones most dependent on it, riders told The Beacon.

Douds’ commute on the 35th Street line, for example, involves a transfer, making the timeliness of her first stop even more essential. Some days it’s there on time. But there was an incident two weeks ago where the bus never showed up.

“I looked on the RideKC app saying that the next one was going to come at 6:33 a.m. Mind you, I have to be at work at 7 a.m.,” she said. “I had to call my boss and tell them that I was going to be running late due to the fact that my bus did not show up.”

The core tenets of RideKC service include access to essentials such as jobs, housing and education, according to the KCATA.

But in Douds’ experience, the KCATA hasn’t always taken proper steps to improve service for residents who need it most, especially when it comes to adequately communicating drastic changes to riders. This can have severe consequences for workers.

“I don’t like to be late,” she said. “I work so hard at my job for me to lose my job due to the miscommunications that the KCATA has given riders.

“It makes it really difficult when they’re not on time, or they don’t show up, or they are redirected or rerouted. They don’t let us know properly.”

Normally, Douds can walk about four blocks to catch the Main Max, but she no longer has this option. “Because of the streetcar expansion, they’ve got the Main Street Max all rerouted.”

On weekends, her line runs even more infrequently, about every 30 minutes, making any delays more stressful. To avoid these issues, Douds uses Uber to get home on the weekends.

“I don’t have that kind of money,” she said. “That’s an added expense that we low-wage workers really can’t afford to do.”

Frequency of service is an issue that the KCATA cannot resolve on its own, as it is dependent on financial resources, according to Baker.

“Most peer cities have twice (or more) funding than KCATA does, and most of them have a regional funding source, which the Kansas City metropolitan area does not have,” said Baker.

Kaamilya Hobbs has experienced similar hardships with the transit system.

Hobbs leaves the house around 9 a.m. to get to her job at Arby’s on North Oak Trafficway. Without a license, she uses the bus as her main means of transportation, catching the 27th Street bus at 27th and Benton Boulevard. By car, she is approximately 16 minutes from her job, but on the bus, her trip is close to two hours.

She used to take the 27th Street bus all the way to Crown Center before catching the North Oak bus, which was then a straight shot to her last stop. But the North Oak line is one of several that were rerouted in May as a part of the RideKC Next program, a redesign of the transit service to add more coverage to the core of Kansas City.

“It was a straight shot at first but then they made it so it detours to a transit center,” she said. “Sometimes the drivers make pit stops and take even longer using the bathroom while riders wait in the bus,” she said.

For Hobbs, the rerouting of the North Oak line felt very spur of the moment.

“One minute, I think it was a Monday, I had taken the bus at a certain time. And then two days later, I found out that it’s a whole 30 minutes later,” she said.

“I’ve even had to tell my bosses, I see no way of myself getting to work on time at all, except on Saturdays, just because of that change in route.”

According to Baker, the best way for customers to stay up to date on unscheduled delays is to subscribe to the RideKC Notify service, where one can receive phone calls, emails and/or texts about possible delays.

“The one catch with that is that with the current driver availability challenge, if a morning run is late or must be held back, it doesn’t always translate to the app quickly enough. We are working to improve that,” Baker said.

The lack of drivers on her route once delayed Hobbs by about three hours.

“I ended up not even being able to go to work because they couldn’t find a driver until the next hour and a half,” she said. “Apparently nobody really wants to drive certain buses.”

Her stop along the 27th Street line falls east of Troost Avenue, a historical racial and economic dividing line. She typically waits at this stop for 45 minutes. Hobbs has witnessed multiple instances of hostility toward drivers that she believes contributes to the low number of drivers. Once, an upset rider smashed the window in a fit, which delayed her commute another 45 minutes.

The driver shortage at the KCATA is simply a reflection of a bigger trend started by the pandemic, Baker said.

“It’s widely known that in virtually every industry, there is a labor shortage, and public transportation is no exception,” she said. “Decreased demand and staffing availability are the primary reasons service frequency was reduced during the pandemic.”

In response to the lack of drivers, RideKC launched a bus operator hiring campaign in 2021. The full- and part-time union jobs start at nearly $18 per hour.

“We do not have sufficient staff available today to increase and restore service frequencies to where they were before the pandemic. Recruiting new employees continues to be a very high priority,” Baker said.

Nash High is a materials relieving specialist at the downtown Central Library for the Kansas City Public Library. A year ago, he lived in Raytown, in the southeast part of the Kansas City metro. He would ride his bike into Kansas City to catch a bus downtown. Then his route was reworked as part of the RideKC Next program.

He has since moved back to the city.

“That was one of the main factors of why I moved back,” he said. “I was like, my commute is going to get a lot harder from there.” He now enjoys his commute, taking the 85 Paseo bus, from Paseo and 45th all the way downtown in about 40 minutes and leaving him with 15 minutes of cushion time before his start time.

What he mainly appreciates about this route is that it is a straight shot from where he starts off.

“Being able to just ride one bus and then get close enough to work is a huge benefit,” he said. “And that’s also one of the benefits of working downtown, because a lot of the buses go downtown, a lot of the north-south ones anyway.”

While free fare is a major feat for transportation equity and accessibility in Kansas City, it is not the final answer.

“I think it’d be a lot easier if they were to show up on time like they’re supposed to,” said Hobbs. “But I haven’t been seeing too much of that lately.”

Since the Kansas City metro area crosses the state boundaries between Kansas and Missouri, crafting unified transit across two government jurisdictions can be tricky.  In May, RideKC launched an East/West Transit Study in order to analyze the technical and financial feasibility of east-west transit connections across the state line.

The St. Louis Metrolink, a bistate light-rail transit system, serves as an example of a successful transit operation across state boundaries. The Metrolink also serves part of Illinois.

St. Louis also received a much higher performance score on AllTransit, with four times the amount of trips per week as Kansas City, as well as 21.5% of low-income households being near a transit system, and seven transit routes per half mile. In Portland, a similarly sized city, 95.3% of low-income households are near transit and there are 10 transit routes per half mile.

KCATA has added and expanded some services, Baker said. For example, a new Flex service, where buses can pick a rider up and drop them off at a specific location, was added in the Northland in May, and it has already resulted in a significant ridership increase month over month. Service was also restored on the 23rd Street route.

Bridging the gap in transportation accessibility not only improves the conditions for workers who rely on the bus, it can also strengthen the sense of community among residents.

“One of my favorite things about riding the bus is meeting people,” said Elizabeth Harris, a marketing and events coordinator for BikeWalkKC.

Despite owning a car, Harris chooses to take the bus to work not only for its convenience, but also as a way to engage her community. During her commute she has been able to create strong friendships with other commuters and even the baristas at the coffee shop along the way.

“The way we build our cities can either connect us or it can divide us,” she said.

“If we built a city where it was easy to get around by bus, or walk, or bike, or whatever it is, and more people did that, then I think we would be better neighbors.”

Women could claim the most governors’ seats in U.S. history in November