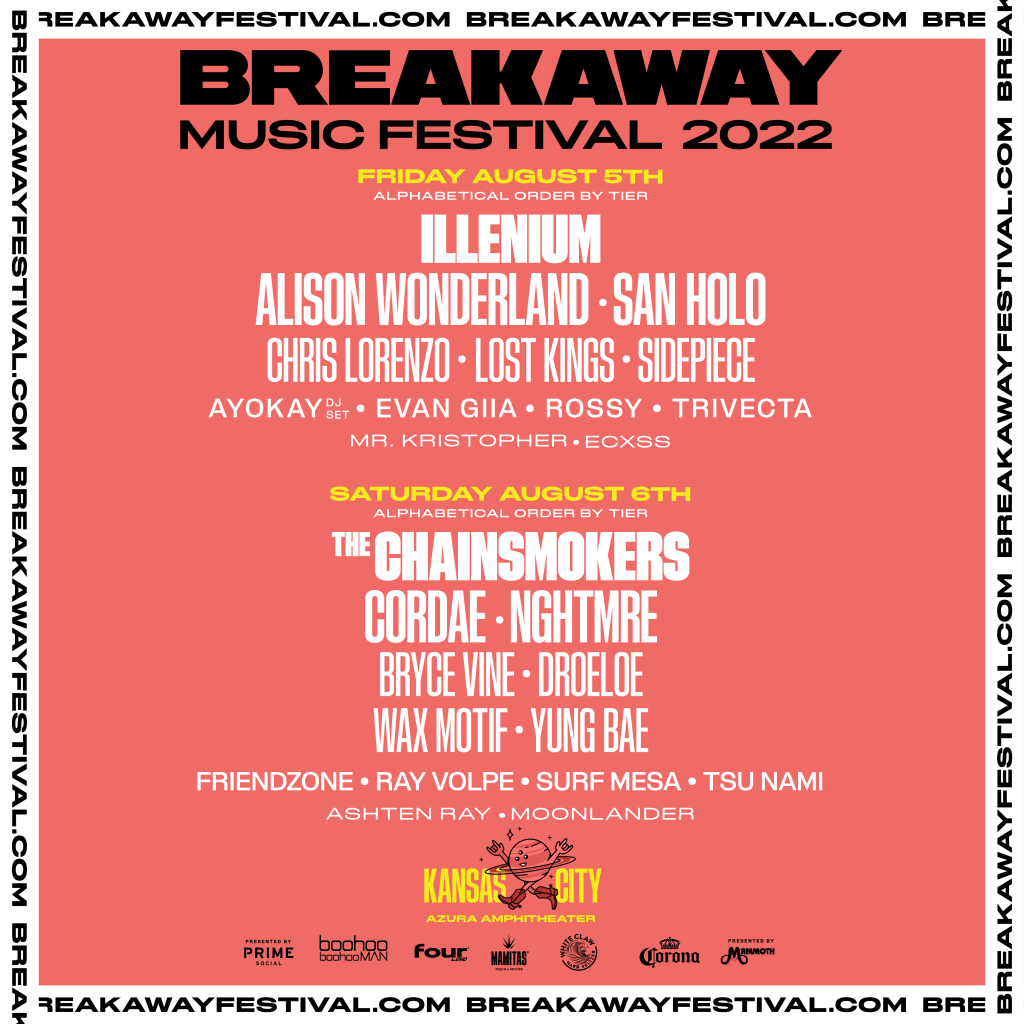 Starting in Columbus, Ohio, in 2013, the Breakaway Music Festival has expanded several times to become two days of shows in North Carolina and Michigan, alongside its home state.

When the company behind it, Prime Social Group, announced the return of its “critically-acclaimed multi-city, genre-blending” festival earlier this year, not only was Breakway expanding to Kansas City, but the festival would be kicking off here.

With a lineup featuring the best and brightest in electronic and dance music, such as The Chainsmokers, Illenium, Alison Wonderland, NGHTMRE, Cordae, Sidepiece, San Holo, Bryce Vine, Chris Lorenzo, Yung Bae, and so many many more, we reached out to Prime Social Group co-founder, Zach Ruben, to discuss the history of Breakway and its growth. 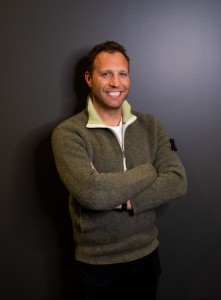 The Pitch: Over the last decade, Breakaway has gone from being in just one U.S. city starting to expanding from coast to coast. What’s been the process of gradually turning this from a Columbus event into a national festival, and now breaking ground in Kansas City?

Zach Ruben: I think we’ve always had high expectations of the brand and we’ve always been very ambitious promoters. It felt that the product that we created with Breakaway that was born and birthed in Columbus felt like it’s such a—not a cookie-cutter model, because I think it’s unique in its own way—but it’s a brand that that can be reproduced in a lot of markets that have a lot of similarities, and it’s a brand that a lot of different fans and fan bases of geographical demographics can enjoy and experience.

We replicate and almost tour without the whole touring aspect of touring.

What made Kansas City appealing as the next step in the expansion? Was it the ability to work with Mammoth and Hy-Tekk?

The number one underlying, driving factor was Hy-Tekk and Mammoth. We started to create a relationship with Jeff Fortier and then Mickey [Ortiz]. They brought in the Hy-Tekk guys and it just seemed like a natural fit: They’ve got the market share. They’ve got plenty going on in the market and the surrounding markets.

We’re definitely aware of the other larger festivals in the space there, but we still felt like Kansas City is a growing metro and a pretty big hub for surrounding colleges and smaller markets. It felt ripe that the Breakaway brand could really stand out in that market and serve a demographic that we felt wasn’t being served.

That’s a very good point, in that KC and Lawrence get a very solid number of big touring acts, but it seems as though the EDM market is really underserved in the metro in terms of being able to pull in something of this size and caliber.

Yeah, definitely. And look, we’re very aware of Dancefestopia and respect that event and what it’s doing. I’ve never attended myself, so I have nothing to say about it. I know it’s a little bit further outside of the city and it’s not as easy to commute or attend—not that Azura Amphitheater is right downtown, either, but it is a familiar location. Easy access.

We’re very obtainable, and very affordable, bringing major talent to some of these underserved markets that normally wouldn’t get the Chainsmokers or Alison Wonderland, at least on the same bill.

You’re obviously limited to what Azura Amphitheater holds, which is a solid 18,000 people, but the appealing thing is you’re not seeing these folks play in a field. You’re seeing them play on a stage and even if you’re at the very back. You’ve still got a pretty good view and access to bathrooms and drinks.

Yeah, and that’s our model. You know, we’ve never gone into a four-walled amphitheater or traditional venue space with this model. We’re always either in parking lots or open spaces that we’re creating a festival environment with by bringing in all that infrastructure, so this one’s a little bit more unique for us. And Azura’s got that great mix of being an amphitheater, but it’s not a Live Nation shed where it’s kind of stale.

All theaters have character, but there’s some flexibility here for us to come in and get creative. We’re also using the back parking lots—the reserve entrance lots. We’re bumping out the footprint there and having a second stage out back with some really cool sponsor activations, a roller-disco rink, and food and beverage options, we created a silent disco, we’ve got VIP options—all of the offerings a festival has. 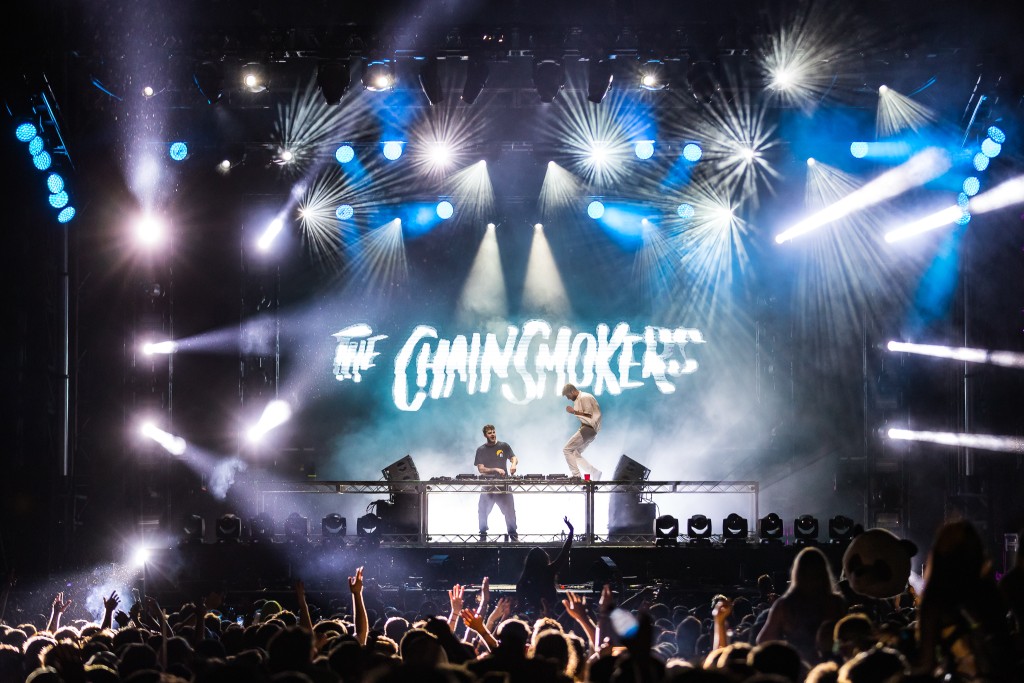 You do have some really great headliners. From reading some past interviews you’ve done, it seems that you have a history and relationship with the Chainsmokers, booking them when you were just out of college for $500 a night?

Is it really satisfying to get to not only watch, but to be part of the rise of an act that you enjoy so much?

Yeah. You know, those guys have been my friends forever. I mean, I was booking them when it was the old duo. Drew Taggart wasn’t even part of the group. When I first started working with the Chainsmokers with Alex Paul and the other guy who’s no longer with the group, we did one of our first shows for 500 bucks. Booked them in a club in Columbus on a Tuesday.

It’s nice to see that they still support the promoters that have been with them for so long and are willing to play these shows because, let’s be frank, a Kansas City music festival cannot support the same kind of fee structure that an Ultra Music Festival or Coachella, or even the Vegas residencies, for that matter, can afford to.

It’s cool they still want to get out and play these markets with us on our events and see the value. We did it in Charlotte last year and it was a great success. They had an amazing time. They thought the the crowd was great, and called it something like “incredible.”

To come to Charlotte for the first time and do these kinds of numbers and play to this fan base on an affordable ticket in such a neat environment? It’s just great to see them be part of that and have not outgrown it.

Breakaway Music Festival is Aug. 5-6 at Azura Amphitheater. Details on the festival here.