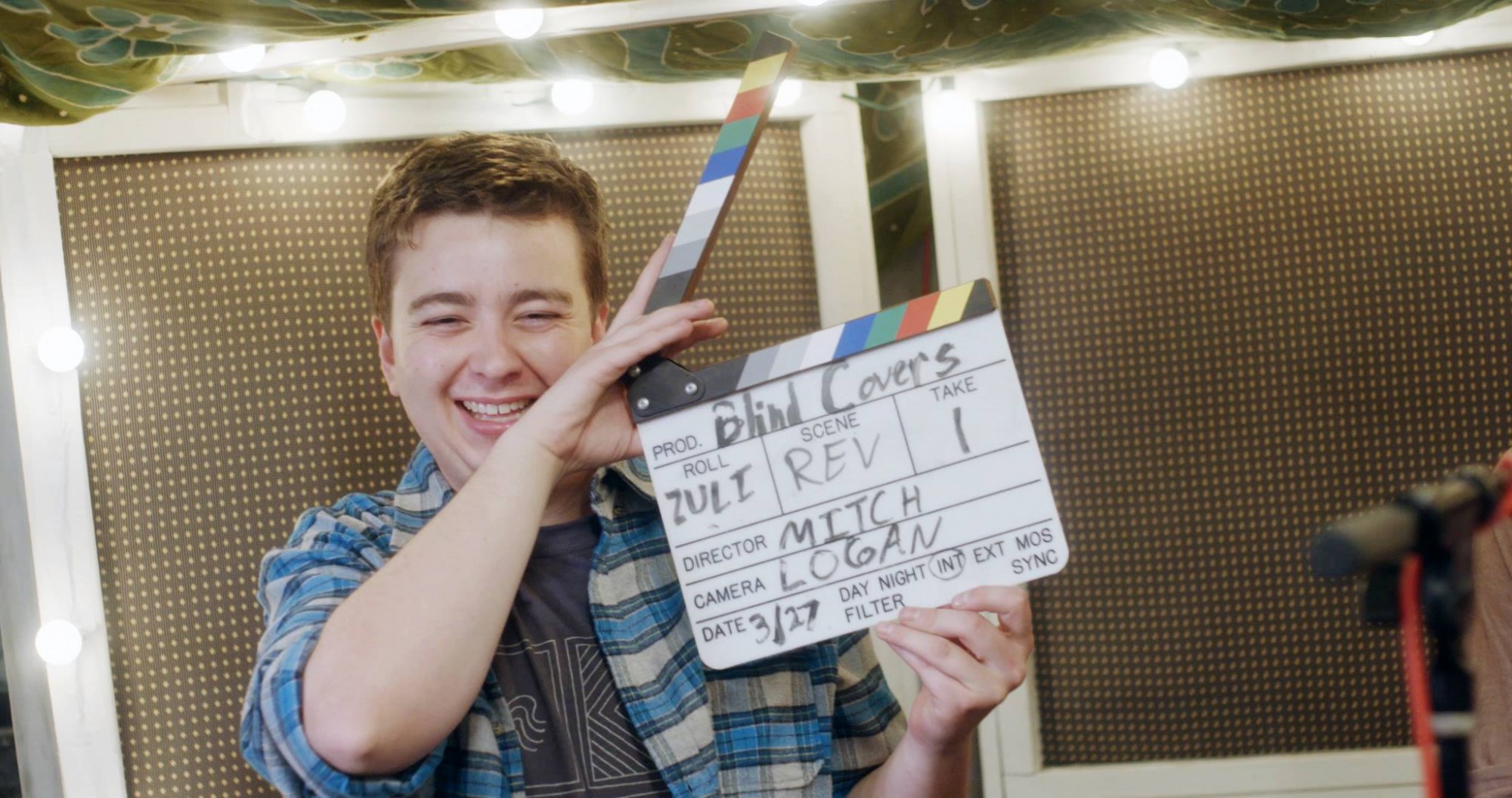 The YouTube series, Blind Covers, has a simple, yet effective, formula: “Bands have one hour to write a cover of a song they’ve never heard before.” The band or artist is given the lyrics to a song without being told the original performer or genre, and over the course of the next hour, they turn those lyrics into something new. It’s a YouTube series that really illuminates the creative process, as well as having an element of a possible impending trainwreck, which really lends an element of danger to what could otherwise just be another live performance series.

One Sunday in late September of last year, I spent an afternoon with the show’s host and creator, Mitch Thompson, and his crew as they taped an episode with the Get Up Kids’ Matt Pryor at the Rino in North Kansas City. Watching the whole thing go down as it happened in real-time had me on tenterhooks even more than watching the show itself, which is really saying something.

For his day job, Thompson works as a freelance prop master and prop maker in Los Angeles. He moved there in 2012, a month after graduating from the University of Missouri, with a bunch of friends who also wanted to work in film. As he puts it, the show began as something of a lark.

“Most of us were working in the industry, but none of us were doing what we wanted to do,” says Thompson when I speak with him by phone from Los Angeles a month after the taping. “In Mizzou, we had written and shot our own sketches–real DIY, run-and-gun kind of stuff–and we were feeling very creatively pent-up. It was just kind of an excuse for us to make stuff together again.”

The direct impetus for Blind Covers came from Thompson listening to the Wonder Years song, “We Could Die Like This,” from their album, The Greatest Generation, and being struck by the way the band’s Dan Campbell writes lyrics.

“[He’s] super-influenced by the way John Darnielle writes lyrics, and there’s one particular line that goes, “We watched the ’92 Birds take the field without Jerome Brown,” and I was like, ‘God, that sounds like a Mountain Goats lyric,’” Thompson recalls. “What would it sound like if John Darnielle from the Mountain Goats sang this instead of the Wonder Years? It would be super-wild and different.”

The series has gone to see some intriguing takes. Bellingham, Washington’s Sweet Invicta gave a Replacements-style take to John Lennon’s “Nobody Told Me,” indie rocker Chris Farren turned the White Stripes’ “Broken Bricks” into a sparse Prince-influenced jam, and Joplin’s the Way Way Back went pop-punk on Reba McEntire’s “Consider Me Gone,” to name but a few of the creative interpretations. Thompson credits the wildly-divergent styles, as well as the remarkably solid results, to the show’s one-hour time limit, which he says puts bands on their toes.

“As with most creative people I know, one of the worst impulses we have is that self-questioning part,” the host says, explaining that these are usually either professional or incredibly accomplished musicians, so once they start running on their innate musicality, the bands are just as surprised by what they can do within that time limit as anybody else. “What I’ve found, watching these bands, is that the time limit forces them to rely on instinct and run on what feels good and what sounds good. They get to the end and they’re like, ‘Wow. I thought I was going to have way more trouble than this, but this went great.’”

I mention the fact that, watching Pryor confidently state he could knock out a cover in 10 minutes and then still have some issues with phrasing and tempo was pretty fascinating. Thompson agrees, pointing to the fact that the Get Up Kids’ frontman is “pretty much a songwriting machine,” through his work with the long-running indie act, as well as his solo material and custom creations through the service Downwrite.

“Seeing him take a step back and try different ways of approaching a song was really awesome to see,” he says. “That was super-exciting. I think it’s a lot more interesting when a band has to throw a bunch of stuff at the wall, and it doesn’t work, and then start to tear things down to their basics and keep building up.”

In terms of what the musicians are offered, it’s never just one song. Ahead of handing the words to Pryor, Thompson and his sister, Morgan, waver between three different choices, ultimately going with Regina Spektor’s “Braille.” I ask Thompson if he’s going for complementary or contradictory when he picks the cover for each episode.

“Lyrically, I try to find something that fits the artist’s voice, or at least something that they would be comfortable writing,” answers Thompson, continuing on to explain that while it might be interesting to watch an artist struggle with a piece far outside of their realm of writing, it’s not exactly fun for the musicians themselves. “I want them to find something in the song that gets them excited about writing the cover.”

Behind the scenes, getting to see just how quickly the whole thing comes together with so few people is half the fun. In Los Angeles, Logan Lemmon shoots the episodes, and Mitchell Haeuszer records and mixes, along with pulling in various friends, and Thompson edits the episodes himself. For Matt Pryor’s episode at the Rino, Matt Cox and Morgan Thompson–along with Mitch–shot video, with the audio recorded and mixed by Riley Corbin. With a crew this small, an extra pair of hands comes in handy. While sitting on a stool and observing–otherwise known as drinking a beer–I was enlisted to clap the slate and make the “Matt Pryor, take one” announcement.

The show just celebrated its fifth anniversary. The first episode, with Los Angeles duo Erin & Melissa doing “Pride” by Manchester Orchestra, came out in late November 2015. There was a substantial gap where the show was off the air, from September of 2017 until March of 2019.

“The first three episodes, we shot in the same day,” recalls Thompson. “We thought, ‘We can learn from that, and then do something different–we can evolve the show.’”

Unfortunately, that wasn’t the case, as the second episode, with Town in the City doing “Independence Day” by Martina McBride immediately blew up, garnering hundreds of thousands of views. It trended on the front page of YouTube, and Thompson had a massive anxiety attack.

“It got too big too quickly,” Thompson says, noting that while all the comments were “super-positive,” to immediately have that many people talking about a brand-new project was a weird feeling. “It felt like we didn’t have a chance to make the show what we wanted it to be yet. So, when people were like, ‘Yes, this is the show we want to see,’ I was like, ‘But this isn’t the show I want it to be yet,’ but I felt like I had to give people what they wanted before I figured out the show.”

Blind Covers became a thing that Thompson still wanted to do, but there was a sense of obligation that went with it. Also, given that the films on which Thompson was working on for his day job were small indie productions, combined with renting studio time to shoot the series’ performances, it got to the point where the show was either going to have to cut corners–thus making the performances sound worse—or stop doing it.

“The financial realities of it, and the fact that I wasn’t having as much fun doing it kind of piled up and I just fell off and stopped,” Thompson says of the show’s initial end. “I didn’t think I was going to come back, ever, for a while.”

However, Thompson regrouped, and the show came back, and he attributes a large portion of why the show continues to Blind Covers’ Patreon followers. Those who support the show through the crowd-funding site might not allow the show to be completely self-sustaining yet, but knowing there is an audience willing to contribute financially is huge, enthuses Thompson.

“Just knowing that there are people invested enough in the show to have an interest in the show financially at all feels like a super-sustainable way to keep small creative projects going,” he says, just as excited at the people who donate a dollar a month as those who give more. Thompson also credits Ben Wendt at the Rino with providing a place to shoot and record episodes.

“I hadn’t been doing the show for nearly a year and a half, and he just reached out to say, ‘I don’t know if you’re still doing the show, but we’ve got this awesome space, if you ever want to do it,’” recalls the host. “He basically convinced me to shoot an episode or two the next time I was back in Kansas City, and since it was so low-stakes, it was some of the most fun I’d ever had, doing it for the sake of doing it.”

That reignited Thompsons’s passion for the show and now, new episodes of the series hit YouTube on the first Friday of every month and, to keep viewers tuned in, there are also original song session videos every Friday at 11 a.m. The original performances are a relatively recent addition to the Blind Covers pantheon, and it’s not been without controversy from the show’s fans, says Thompson.

“When we started doing the sessions, people would comment, ‘This isn’t the show! We hate this!’” Thompsons says, but he feels like that, since the show’s return, the audience that has stuck around accepts the show for what it is, and will go wherever Blind Covers wants to take them.

It took a minute, because the show’s once again been on hiatus—this time due to Covid—but today Thompson finally released their compilation, Let’s Stop Clapping, Let’s Start Doing: Five Years of Blind Covers. He wants to use the show’s fifth anniversary to raise money for organizations doing great work in the two cities that mean the most to me, so all proceeds from this compilation on Bandcamp will be split between SELAH Neighborhood Homeless Coalition in Los Angeles and the Urban League of Kansas City.