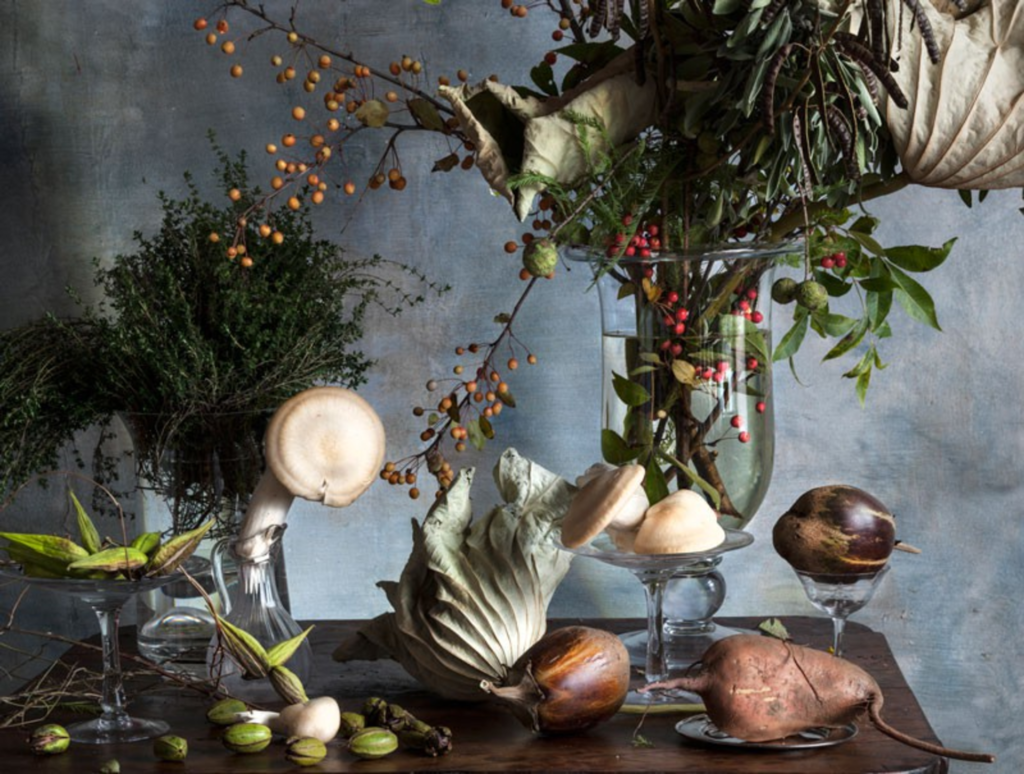 Vera Mercer’s photographs are, in a word, huge.

They take you in, her images now at Sherry Leedy Contemporary Art (2004 Baltimore). Each is a carefully composed table setting, in the style of 17th-century Dutch and Flemish still-life paintings — think bread, flowers, fruits, fish, fowl, cheese and crabs, arranged amid shiny silverware, sparkling glasses and dwindling candles. Everything is dead or dying and at once visually seductive but unsettling. (The furry severed cow’s head is particularly unappetizing.) Most of the prints are unframed, allowing the brilliant colors to pop. Onions and tulips shimmer like golden oil floating on water. It’s art worth returning to.

Also at Sherry Leedy, Anne Austin Pearce’s works on paper cast mostly gray tones in the back room, where they are hung in sets of four, five and six in an exhibition titled This Is How I Feel When I Think About You. Relationships are made of complex memories, which could explain why the “you” in question can’t be expressed in just one shot. Hot-pink splashes and blue washes are connected by shiny trails of pinpoint dots on these abstract portraits. Pearce will be on hand Saturday to explain more at an 11 a.m. artist talk. 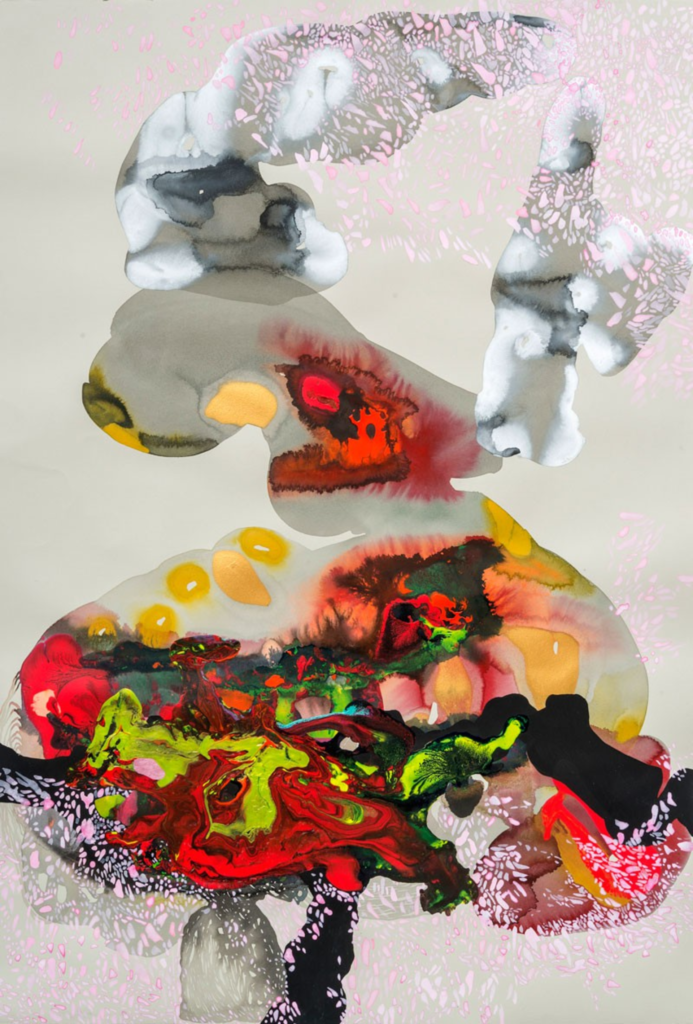 Remember that semidomesticated white-tailed deer that lived in Elmwood Cemetery until some miscreant deliberately shot it? Deaths such as this inspire Rodolfo Marron’s work. A collection of illustrations, made with locally derived pigments, is part of I Don’t See You Walking Children in Nature at the Late Show (1600 Cherry), a two-person exhibition with Jason Needham, who found something hopeful in the explosion of greenery brought on by the spring rain after the drought of 2012.

Spring is two weeks away, which means that Kansas City Art Institute seniors are putting together their portfolio exhibitions. Friday, for instance, a baker’s dozen of illustrators including Kelsey Wroten, Kristopher Martin, Rosie Ruzicka, Jacob Canyon Robinson, Spencer Pullen, Kelsey Borch, R.T. Smith and graphic entities already branded as CW Illustrations and Scratchbang, show work together in The Donut Box at Vulpes Bastille (1737 Locust). Look up the lot of them at thedonutboxshow.com, which has links to their individual sites, and then look in person at what the artists say is a “collection whose strength rests in its differences.”

Hugh Merrill is showing at two galleries Friday. The Kansas City Artists Coalition (201 Wyandotte, in the River Market) has his prints in one show, along with Map of Days by Sharon Harper and works by Ron Anderson and Melanie Johnson. At Todd Weiner Gallery (115 West 18th Street), Merrill takes on depression with a series of mixed-media monoprints called Winter’s Journey. He says the art here is based on the saddest music he knows, that of Franz Schubert.

Before the colors of “the dress” were a thing to waste time arguing about, Craig Mildrexler was painting images intended to look one way in natural light and quite another in ultraviolet. See his two-in-one neon wonders at 504 Gallery (504 East 18th Street), set to funky sounds by Moody J.

Finally, MLB Designs (2020 Baltimore) is hosting Washburn University associate professor of art Yeqiang Wang for a showing of his watercolor studies. The Chinese-born Canadian is best-known for photo realism, but his adept brushwork shines here, too.