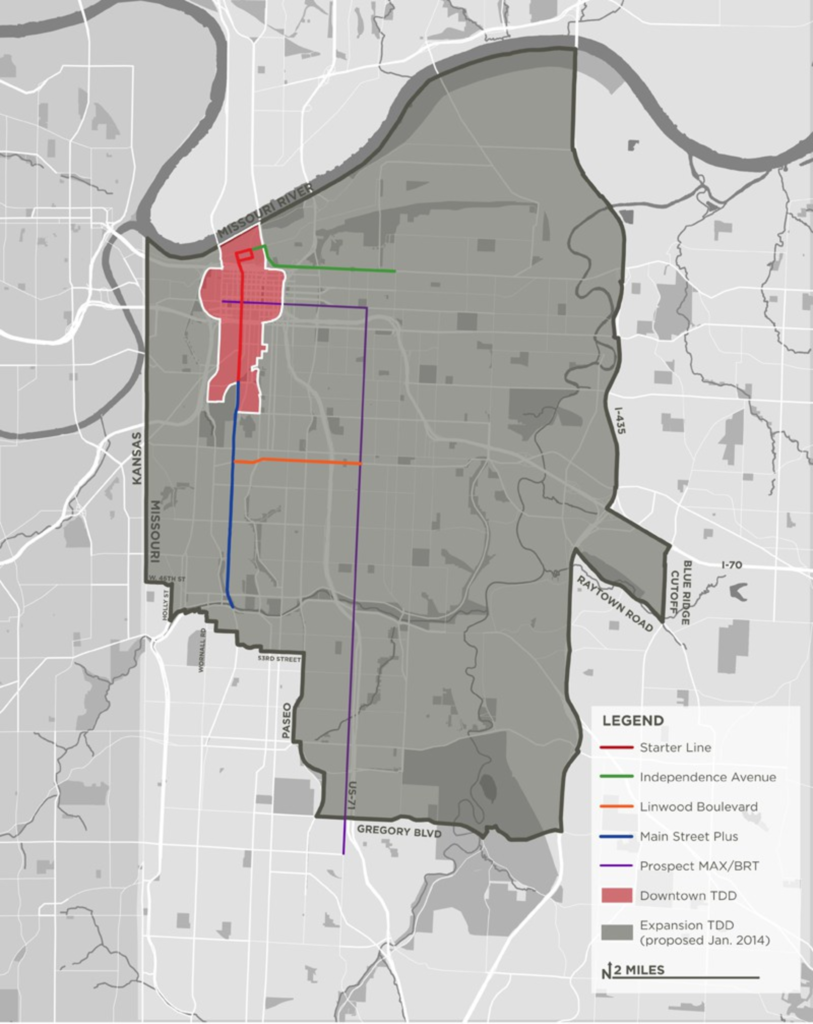 Kansas City, Missouri’s August 5 ballot is one of the more convoluted documents to face voters in recent memory.

The city is holding the first of two elections to expand its streetcar project. But the ballot also includes a statewide measure to raise taxes for various transportation projects that affects the streetcar vote and its outcome. Let’s take a closer look.

What am I voting on?

Question A decides whether to create a transportation-development district for a huge swath of land south of the Missouri River. TDDs are usually used to develop far smaller projects, such as new shopping centers, by collecting additional sales taxes or special property assessments to defray the costs of construction.

The streetcar TDD generally extends south of the Missouri River to Gregory Boulevard, and east from State Line Road to Interstate 435. Brookside and Waldo were cut out of this TDD because the cost to run a line along Brookside Boulevard was expensive, and there was organized neighborhood opposition to the plan.

The expanded streetcar line would extend the 2-mile downtown tracks farther south, to the University of Missouri–Kansas City, with two lines branching off the Main Street artery that head east on Independence and Linwood boulevards. It would also add a MAX line along Prospect Avenue.

Only people who live in the proposed TDD get to vote on this one (sorry, Northlanders).

Would this increase taxes?

The August vote does not increase taxes. But it does set the table for a November vote on a 1-cent sales-tax increase.

It’s difficult to imagine that there are many people who would vote to approve a TDD but then turn around and reject the tax increase that would fund the project. When downtown Kansas City voters weighed in, on two different election dates to create the starter line, the voting percentages in both elections were roughly the same.

Would downtown taxes increase if both streetcar elections pass this year?

No. Downtown has already approved its 1-cent sales-tax increase and special assessments.

What about the rest of the expansion streetcar TDD?

Sales taxes outside downtown would increase, up to 1 percent. Commercial and residential properties within one-third of a mile of either side of the streetcar line would pay a special assessment (basically an add-on to property-tax bills) for up to 25 years. Nonprofits, which normally don’t pay property taxes, would also pay a special assessment if the August and November streetcar measures pass and their properties are worth more than $300,000. For example, the Frank Lloyd Wright–designed Community Christian Church, at 4601 Main, which has never paid property taxes, would owe $1,585 a year.

City-owned property also would be assessed — an oddity in the funding scheme. Liberty Memorial, for example, and the surrounding acreage on both sides of the tower, would be levied $4,455 a year.

What are some other examples of special assessments?

Wait, Plaza Vista would owe only $81?

Plaza Vista, the former failed West Edge project and new home to high-power law firm Polsinelli, is a shiny, gleaming new building that commands perhaps the highest office rent per square foot in Kansas City. Doug Stone, a lawyer who represents the streetcar TDD (and is a former Polsinelli partner), says Plaza Vista’s assessment is low because the last time Jackson County set a value to the property, it was in its stalled, dilapidated, half-built phase, following Bob Bernstein’s attempt to turn it into a new headquarters for his advertising firm. When its tax value is next assessed (Jackson County looks at properties every two years), the property should be on the hook for six figures in assessments.

Other abandoned, decrepit buildings within the TDD zone will pay larger assessments than Plaza Vista. The old Joe Joe’s Italian Eatery, at 4216 Main, which was an empty building last year, is assessed at $304. The three empty lots to the south of Joe Joe’s (now refashioned into a bank) were also assessed at more than Plaza Vista.

Though the uncompleted Plaza Vista building was virtually useless at the time of the assessment, it’s still prime real estate.
How do I know if my property falls within the assessment zone?

At nextrailkc.com/tdd-special-assessment-zone-map, click on your property. Keep in mind that the streetcar’s exact lines haven’t been finalized, so the assessment zone could change. The boundaries won’t be precise until the Streetcar TDD Board (which includes Mayor Sly James, Port Authority CEO Michael Collins and two of their appointees) crafts the final zone after the election (if the measures pass).

Will riders pay to ride the streetcar?

Policymakers haven’t decided yet whether to charge fares on the expanded streetcar lines. The downtown starter line was established as a free ride. It seems unlikely that the expanded lines would also be free.

Do these taxes pay for the entire project?

No. The city must also come up with a 50-percent federal match (which is still taxpayer money) before taxes are collected. That means that even if both the August and November measures pass, the sales tax probably wouldn’t increase until 2017.

If the expansion feels rushed, that’s because it is. James thinks he has a better chance at securing a federal match while Barack Obama is president. Federal funds made up about 37 percent of the downtown streetcar line. Even then, the financing plan was still short $30 million–$50 million, though streetcar boosters say they can bridge that gap between now and 2017.

So this Amendment 7 statewide transportation tax has nothing to do with the streetcar, right?

Wrong. The Missouri Legislature, which has failed to adequately fund road and bridge projects over the years, approved a constitutional amendment to increase sales taxes by three-quarters of a cent statewide to pay for various road and bridge projects. It’s billed as a temporary 10-year tax, though the Legislature has given no indication that it won’t try to renew it after 10 years (as often happens with “temporary” taxes).

The original list of proposed Amendment 7 projects contemplated by the Missouri Department of Transportation did not include any funding for the Kansas City streetcar. But James struck a deal with MoDOT to earmark money for the streetcar so that city leadership wouldn’t oppose the tax.

The result of that deal: $124 million from that three-quarter-cent statewide transportation tax will fund the streetcar. Add to that another $20 million to fund a Prospect MAX bus line, and add to that another $30 million in discretionary funds left to Kansas City from the statewide tax, and Amendment 7’s streetcar-related monies tally about $174 million.

So if both streetcar elections and Amendment 7 pass, do sales taxes increase by 1.75 percent in the TDD?

Who’s for the streetcar expansion?

KC’s City Council, in particular, is hellbent on passing this. Looking at campaign-finance reports also provides some solid clues about who’s behind the project: companies that can make money off it (Burns & McDonnell, along with streetcar-building companies Stacy & Witbeck and Herzog Contracting Corp.). The Kansas City Star endorsed the passage of the streetcar TDD and Amendment 7. Almost every other newspaper in Missouri opposes Amendment 7. Some East Side religious leaders, such as Wallace Hartsfield and John Modest Miles, support the streetcar extension.

East Side political club Freedom Inc. opposes the streetcar (though it endorses Amendment 7). Other East Side religious leaders, such as Bishop Tony Caldwell, have spoken against it. James B. Nutter, the local mortgage—company owner and frequent financier of political campaigns, has donated money to the political organization opposing the project.

What happens if the August streetcar measure fails?

Then there’s no need for a November ballot. MoDOT may hold on to the $124 million earmarked for the streetcar in case the streetcar fails and Amendment 7 passes, to see if Kansas City comes up with another proposal.

It’s likely that Kansas City leaders will keep coming back to voters with streetcar—expansion propositions. Just ask Russ Johnson, a Northland councilman whom the streetcar has left in a perpetual state of consternation. The prickly, termed-out councilman had this to say at a council meeting, about the next step if voters demur:

“They [voters] may say no, but I envision that after that, we would move forward in some other way, keeping in mind that a transportation-development district in Missouri can be created with just 50 registered voters. If anybody out there thinks that if this gets voted down in August it’s going to go away, I know 50 people who are going to force you to move forward or they will move it forward for you. Let’s not kid ourselves — streetcar is going to be expanded whether we like it or not, because I know 50 people that will figure out how to draw a boundary to get it passed.”

Johnson sure makes the streetcar sound like fun, doesn’t he?