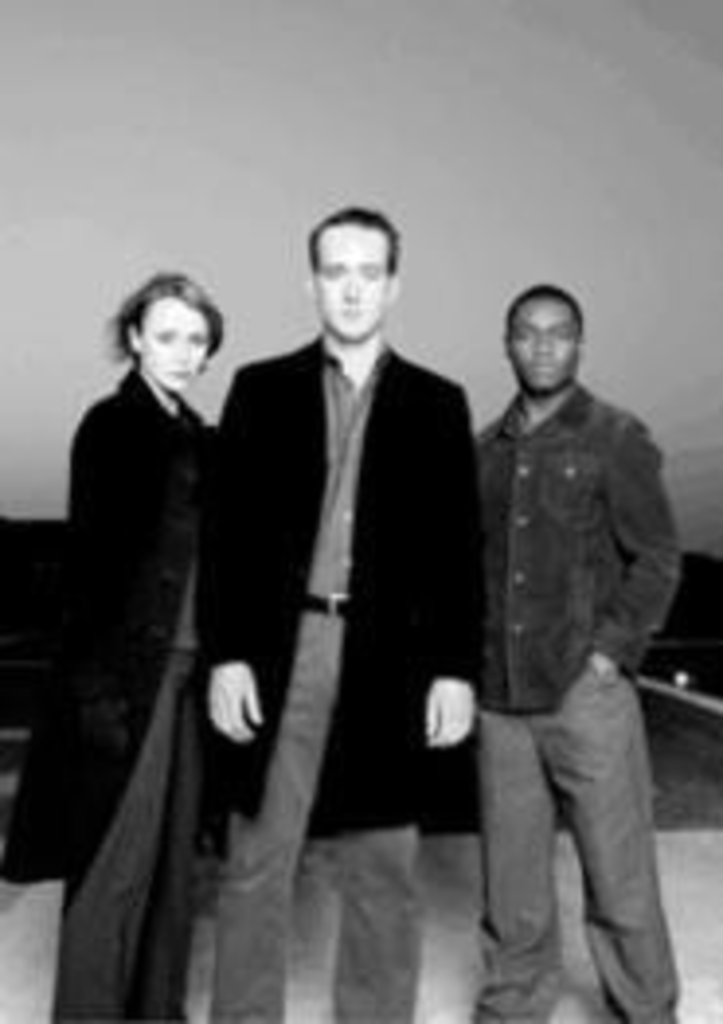 David Wolstencroft moved from London to Los Angeles in November, and not only so he could rise each morning for a game of tennis—though there is that, and that might have been good enough. He made the trip, which is thus far temporary but may well prove permanent, for the same reason offered by the other 83.3 percent who light out for the Western territories: to find work in the dream factory, where entertainment is mass-manufactured. Unlike most who make the journey, Wolstencroft does not arrive with a blank résumé and an empty suitcase; indeed, he landed on these shores, pulled from his valise a novel about espionage and sold it before he’d recovered from jet lag. He has also made television shows in England, where they have been well-received and much honored. But over here, all that means is when he meets with network executives, they treat him very much like a child who’s made a finger-painting for the refrigerator—a little pat on the head, a little how lovely for you, not much more.

“I had a meeting with the production company of a network yesterday,” Wolstencroft says. “There was a lot of head-nodding, a sense of, ‘Yeah, great, well done. Oh, you’re number one in Turkistan? That’s brilliant. You have a very successful Iranian game show? That’s great for you.’ Nothing outside of federal land seems to matter.” He pauses. “You could argue that Britain is federal land, but anyway.”

That condescension will evaporate soon enough. Wolstencroft’s series for the BBC, an hour-long espionage drama titled Spooks in the U.K. and sensitively retitled MI-5 for rebroadcast on the A&E Network in the States, ought to move him from the kiddie desk to the adult table in short order. Though it airs in the cable-station suburbs, far from the network’s densely populated high-rise neighborhood, MI-5 has attracted enough attention—billboards around L.A., two flattering pieces in The New York Times—for Wolstencroft to consider it a success before it aired a single episode. (It debuted on A&E on July 22 and airs Tuesdays at 9 p.m. Central.)

At first glance, MI-5, about the day-to-day dealings of the British intelligence agency, looks very much like an American show. Its split screens will comfort those needing a 25th hour of 24; its spy games and tech talk will delight those who watch Alias for reasons other than Jennifer Garner; its walk-and-talk scenes will appease those who find The West Wing not chatty enough; its resolutions at the end of each episode will satisfy those who watch Law & Order for the unhappy ending. And it’s populated by the young and the restless, good-looking and ethnically diverse characters who might be right at home brewing laugh-track chitchat in a sitcom coffee shop. There’s Tom Quinn (Matthew Macfayden), a John Cusack-Clive Owen hybrid for whom the job has become a hindrance on his burgeoning personal life; Zoe Reynolds (Keeley Hawes), the spy with binoculars everyone else is staring at; and Danny Hunter (David Oyelowo), who uses his technical prowess to raise his credit limit and keep in high fashion. Their superiors, Harry Pearce (Peter Firth) and Tessa Phillips (Jenny Agutter of Logan’s Run), are accordingly cantankerous and compassionate.

But merely to compare it to its Yank counterparts does MI-5 no justice at all. It’s far better—”startlingly, embarrassingly” so, to quote the very kind Times—than the likes of The Agency or Alias or even 24 and every other hour-long drama on the major American networks. Granted, that says little at a time when every other scripted show is a C.S.I. or Law & Order or J.A.G. spin-off or knock-off, but MI-5 does not deserve to be lumped in with the shows to which it bears a facile resemblance.

It’s too clever, too sophisticated and too human for that—a show about people who live (and, in one shocking instance in the second episode, die) for their job, which happens to be protecting the citizenry of Mother England from the likes of American anti-abortion terrorists, race-baiting politicians, Turkish extremists and even their own fallen agents. There are copious references to al-Qaeda and Osama bin Laden, but it’s not merely a series in which brown-faced baddies mean to do Britain ill. The series is as much about Tom’s fragile affair with a single mother and her young daughter, from whom he keeps too many secrets, as it is the agency’s attempts to keep President Bush out of harm’s way when German anarchists threaten his visit.

“I showed a friend of mine the second episode when I first came out here, someone I really respect,” Wolstencroft says. “And he just sort of sat back and said, ‘That has more story in an hour than in an entire season of some American drama that I’ve seen.'”

Wolstencroft actually wrote the first season—six episodes that aired last year, though two more from the current second season will air on A&E—before September 11; given the abundance of secret-agent shows in the works at the time, something was in the air long before the smell of smoke. Writers and executives behind 24 and The Agency, which had already begun taping, were forced to rewrite episodes and pull some altogether after the World Trade Center and Pentagon attacks. Scenes of airplane crashes and references to anthrax and bin Laden were altered to keep from aggravating fresh wounds.

Wolstencroft chose instead to drop his agents in a grave new world in which War on Terror is business as usual. The Brits and Americans have a tenuous relationship: Tom’s CIA counterpart, Christine Dale (Megan Dodds), has little patience for MI-5’s handling of an American criminal in the first episode. She tells him they aren’t the “equal partners” he thinks them to be: “You actually have to get off your butt and do something,” she tells him. You imagine Bush saying much the same thing to Tony Blair last April.

“These stories would just seem trivial if we just had these guys excitedly pursuing al-Qaeda, because, OK, they’re there, but that’s not what’s occupying everybody’s attention,” Wolstencroft says. “It’s like our series would be like a set of hematologists in a lab in a hospital, the camera would burst into the emergency room, you get to go, ‘What’s that? Oh, OK,’ and then everyone’s looking through microscopes. We wanted to contextualize the show in a post-September 11 world and just think more deeply about the way that would impact British-American relations and the way intelligence is done.”

There is one drawback to MI-5‘s airing on A&E: In England, each episode runs just longer than 59 minutes, and in the States some 15 minutes have been trimmed for commercials. Because the series is a joint production with A&E, it doesn’t air on BBCAmerica, which allows the likes of Coupling and The Office to run long (40 minutes for a comedy), so what we get here is more action and less reaction. The guts haven’t been ripped out, but a chamber’s missing from the heart. (The entire series, with myriad extras, is available as an extraordinary imported DVD.) Still, it makes Alias look like a cartoon, and not only because you can actually understand it.

Wolstencroft has come so far since his first British series, a reality show called Pet Power—about animals who rescue humans—that does not appear in any of Wolstencroft’s press biographies, though it was Wolstencroft who first mentioned it during this interview. “We called it factual entertainment, by the way, in the mid-’90s,” he says without pride. His second show, called Psychos, aired four years ago on England’s Channel 4, which is that country’s equivalent of HBO in that its executives push for “edgy” content. In the case of Psychos, that meant a series about a psychiatric unit in which the doctors were as nuts as the patients, particularly the caregiver on lithium who, when off his meds, was prone to humping hot nymphos. It ran for a single, six-episode season.

Wolstencroft, born in Hawaii to British parents, doesn’t easily accept the compliment that MI-5‘s better than most American TV. He insists it was merely his intention after Psychos to create a series that rivaled American shows he loved as a kid and hoped to imitate as an adult. On the Spooks DVD he talks openly and glowingly of Hill Street Blues and Moonlighting, and he cites David Chase’s The Sopranos and Aaron Sorkin’s The West Wing as his main influences for MI-5.

“When we were sitting with a blank piece of paper, Sopranos had just started bleeding to the public consciousness,” he says of the show he co-writes with British political playwright Howard Brenton. “The Mafia was just this kind of joke, people with marshmallows in their cheeks doing Marlon Brando impressions, and David Chase basically humanized and made it visceral and exciting and emotional and terrifying and gave it this sort of emotional scope and depth that I hadn’t really appreciated. Then The West Wing was sort of starting when we were writing, and it was just sort of a sense of, ‘Well, there’s ambitious drama coming out of America that’s stunning, as far as we’re concerned.'”

The Brits can be blamed for a lot of crap on television, chiefly the proliferation of the reality show, the prime-time game show and the makeover show (though if they’re responsible for the marvelously bitchy Queer Eye for the Straight Guy on Bravo and now NBC, well done, mate). But the best of the imports recall the time when four British lads reinvented rock and roll after listening to all the Buddy Holly and Chuck Berry they could get their fab fingers on.

“We’re all part of the same creative oxygen, and we’re all just sort of trying to do our own thing,” Wolstencroft says. “The difference between British drama and American drama is that American shows have 24-episode orders, they’re written by a room of writers and every story’s beaten out by the group. We’re doing small runs, eight and 10 episodes, written by just a few of us, so it’s…”

All killer, no filler, as they used to say on FM radio?

“That’s right. Exactly. Every one’s a winner. It’s extraordinary to see this review thing, you know, ‘This is better than 24 or Alias.’ I don’t think it is. It’s on a par with these shows, because they have different aims and objectives. Our objective was slightly different, and I think we hit it, but we wanted to show that we could produce something that had the writing caliber of an American show and the production value of an American show. I do think there’s a difference between giving people the same thing every week, but you want to invite these people into your home every week, which is the big U.S. TV franchise paradigm, and we want to give people a wonderful time every week.”