You Show Me Yours 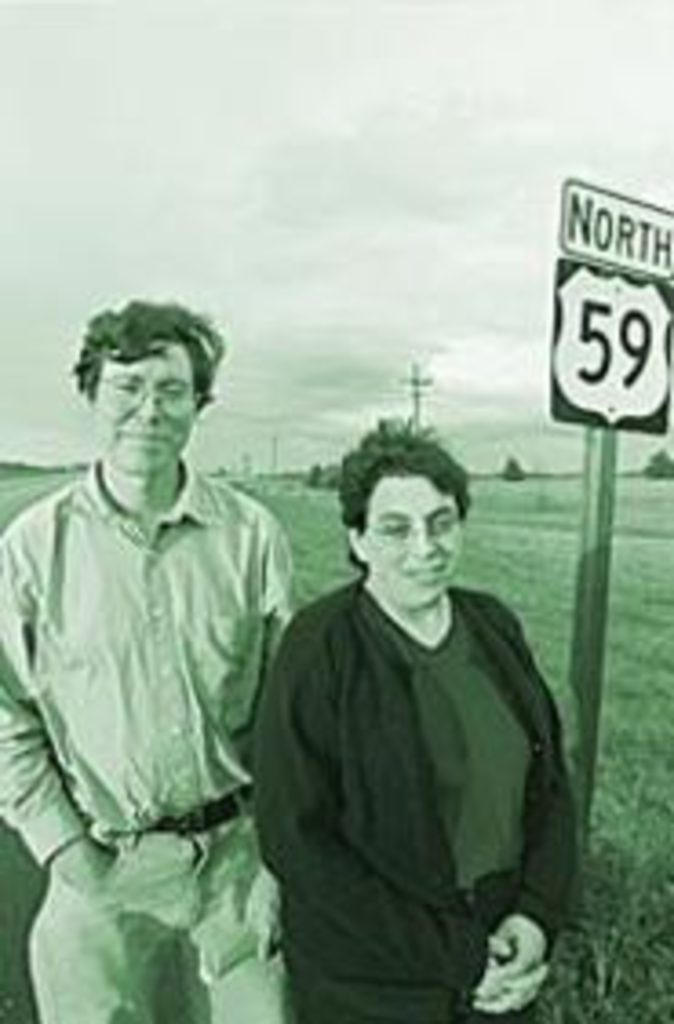 One evening in early June, a group of folks gathered at a filling station on U.S. Highway 59, a two-lane road that runs between Lawrence and Ottawa, Kansas. They piled into a car and drove a mile or so east to a patch of open prairie that might one day become home to a new, wider Highway 59. Once there, they lined up, spacing themselves roughly 15 feet apart, and began a slow trudge across the horizon. As the day’s light dimmed, they lowered their heads and scanned the ground for any rare plants that might be endangered if the proposed highway were ever built. What they found is anybody’s guess. They’re keeping that a secret.

The evening’s activity was another page in an ongoing saga to improve a highway. It began in 1995 with a fatal car crash, one of more than 10 that occurred on U.S. 59 during the ’90s. Area residents decided enough was enough. They passed around a petition calling for improvements to the road. The berms were too narrow, they said. Sightlines were obscured. And lacking adequate police patrol, commuters often drove too fast.

They delivered the petition to the Kansas Department of Transportation (KDOT). Officials there considered the plea but decided to spend their time and money on other projects. The residents kept pushing, however, until KDOT finally acquiesced. At a public meeting in Ottawa in 1998, state officials presented a plan: They’d improve the road by upgrading it to a four-lane highway. And they offered a choice. They could build the new road where the existing road ran or they could build it a mile to the east.

Residents were aghast. Either way, dozens of property owners stood to lose out.

A spate of public meetings commenced. For hours on end, residents stood before public officials and pleaded for their homes and farms to be saved. It was neighbor against neighbor.

As the meetings wore on, it became clearer that the eastern alignment would get the final nod. It also became evident that while the new highway was being planned and built — a process that would take five to seven years — nothing would be done to improve the old highway. Anticipating this, some of the folks who distributed the original petition formed the Franklin-Douglas Counties Coalition of Concerned Citizens (FDCCCC). The group grew and took action. Its members met monthly in a church just off U.S. 59 and delegated tasks. And, perhaps most significant, the group hired two lawyers — Bruce Plenk and Bob Eye, both of whom had represented a Lawrence contingent that helped sink KDOT’s decade-long effort to build the South Lawrence Trafficway, a much-needed bypass that was planned to go through wetlands outside the fast-growing city.

The coalition’s biggest coup came this past spring, when KDOT announced it would prepare an in-depth report on how the eastern alignment of U.S. 59 might affect the region’s historical, cultural, and natural resources. Dubbed an environmental impact statement, or EIS, the report demanded a great deal of research and preparation — meaning the highway project has been delayed by at least a year.

FDCCCC members were proud to have slowed the gears of the highway machine. But the coalition wasn’t about to rest on its laurels. A few weeks later, its members announced that they’d be compiling their own report. “We’re doing a shadow EIS to ensure that all of the environmental, historic, and farming impacts are really taken into full account by KDOT,” says Caryn Goldberg, the coalition’s spokeswoman.

Though KDOT officials are used to public opposition to highway projects, especially in Lawrence — “Does the phrase ‘South Lawrence Trafficway’ ring a bell?” asks KDOT spokesman Marty Matthews — the coalition’s announcement presented an unusual twist. “I don’t think we’ve ever quite had that happen,” Matthews says.

Funded by their own contributions, the group members embarked on a study that is in many ways identical to KDOT’s. The activists are following the same strict federal guidelines. They’ve volunteered countless hours and hired a handful of experts.

In addition to combing the area’s landscape for evidence of rare plants or birds, they’ve been digging through KDOT’s files to learn how officials there are conducting their own EIS. They’ve found some interesting items, including references to their own group. In one memo, a KDOT engineer categorizes the controversy drummed up by the coalition as being “mostly from the NIMBY (not in my backyard) syndrome.” In another, KDOT spokesman Ron Kaufman refers to a number of letters KDOT received from residents concerned about U.S. 59. There were more than twice as many letters opposing the new alignment as there were letters supporting it, and to dismiss the parity, he wrote: “As we all know, the strident opposition is self-supporting and tends to push away the supporters. The opposition surrounds themselves with those who agree with them, and then claim to know of no one who has a different opinion.”

But coalition members are most upset about what they haven’t found. In reviewing the state’s documents, they uncovered references to various studies and reports that were not contained in the files. When they requested these documents under the Kansas Open Records Act (KORA), they were denied. This troubles them. “KDOT, as a public service agency, is duty-bound to do this work and report it to the public,” says Goldberg.

In their defense, KDOT officials say they have every intention of releasing the materials they’ve collected — when the report is finished. Matthews likens the strategy to that of a writer: “Would you rather take your story to your editor after it’s finished or take it to him one paragraph at a time?”

So KDOT officials are exercising the exemptions afforded them by the full text of KORA. “Some of the stuff we can’t show the public yet,” Matthews says. “We’ve been as open as we can be within the guidelines (for an EIS). For some things, we use the exemptions under KORA so we can do our jobs.”

Yet coalition members insist KDOT hasn’t done all it can to ensure thorough public involvement. For example, when KDOT officials met in early April to discuss the scope of their EIS, they didn’t invite anyone from the coalition, even though its members had asked to be included. When the activists received a copy of the minutes from the meeting, they found that the section regarding public input for the project mysteriously ended midsentence.

While KDOT officials couldn’t explain (and wouldn’t officially acknowledge) the incomplete document, they did offer a reason why the group wasn’t allowed to attend the meeting. “We didn’t do public input for that because we’d already had meetings,” says KDOT spokesman Kaufman. “We felt the public had already done a fine job of representing itself.”

Despite this professed satisfaction with the amount of information they’ve already received from the coalition, however, KDOT officials say they’d like to get more — particularly any information the group has unearthed while preparing its shadow EIS. “It’d be nice if they could share their information with us,” Matthews says.

But the coalition isn’t sharing. The activists are waiting until KDOT releases a draft of its EIS before revealing what they’ve found. As a result, they’re beginning to sound like their bureaucratic foes: “The EIS itself is a complete document,” Goldberg says. “To let out little things piecemeal goes against the spirit of what an EIS is.”

“We want to make sure KDOT covers all the bases,” says Goldberg’s husband, Ken Lassman, who was among the late-spring prairie-combing party. “If we as amateurs find stuff they didn’t, that calls into question what they’ve done.”

So why not just provide the information while KDOT is doing its research, to make sure it’s done correctly from the start? “We’re just a grassroots organization doing this in our free time,” replies Goldberg. “KDOT has a full-time staff working on this EIS. They have experience and funds to hire whatever experts they need.”

And while the coalition isn’t sharing its information, the fact that it’s doing its own EIS appears to have inspired KDOT officials to do a more thorough job with theirs. When the state announced its intention to do an EIS, it estimated the project would be completed by the end of the year. That due date has now been extended to spring 2001. “On this particular process, we’re being very judicious,” Matthews says. “We want to make sure we dot all the I’s and cross all the T’s. Right now, the spotlight is on us.”