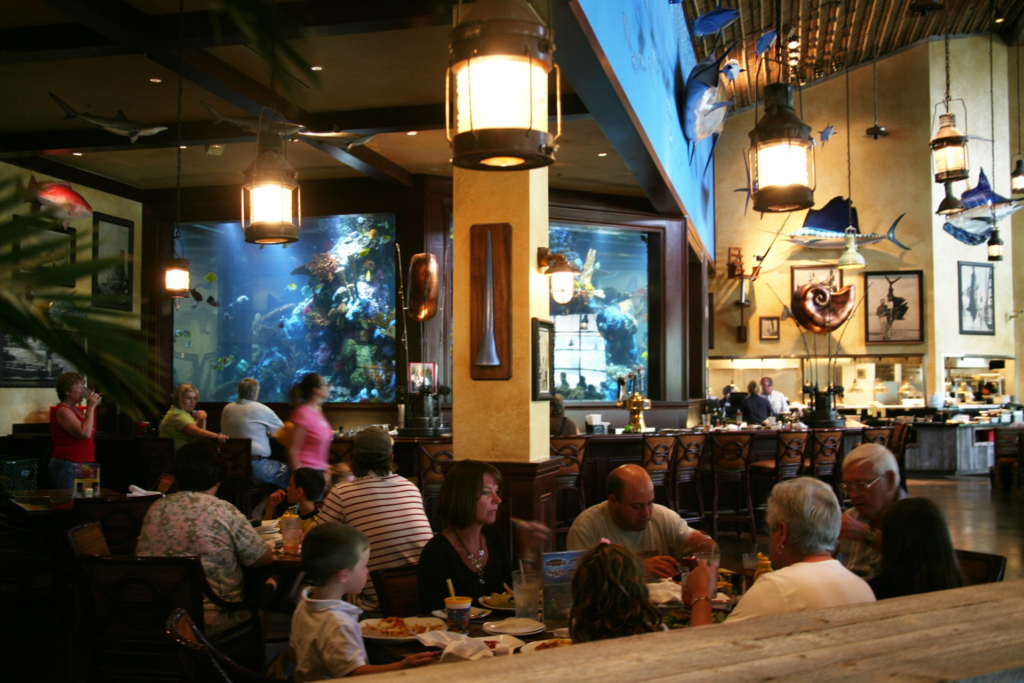 To get to the Islamorada Fish Company, you pass a lot of nicely displayed sporting gear until you arrive at the rustic set of stairs near a splashing waterfall. Go down the stairs, past a scene of some large grizzly animal — a bear, I think — attacking smaller, defenseless creatures. All of these hairy animals were once alive and hungry, but now I suppose you would call them “stuffed.” And not in a cuddly way.

If you turn at the bottom of the stairs, you’ll see an indoor pond with real, living ducks (who, ironically, seem almost lifeless), but if you walk forward, you’ll pass more sporting gear — I didn’t actually look at any of it — until you reach the pretty glass-paned doors leading into a very attractive dining room.

The “world famous” — yes, that’s what the sign says — Islamorada Fish Company is the extremely appealing restaurant on the lower level of the vast Bass Pro Shop in Independence. There is another restaurant just like this one at the Bass Pro Shop in Olathe. That location is also apparently world-famous, though I hadn’t heard of either until a friend who likes to go camping told me about having lunch there. He liked it a lot, particularly because he could shop for fishing lures, mosquito repellent and a sleeping bag and eat an Ozark-style fried-catfish sandwich with thick-cut fried chips, all in less than an hour.

I know what you’re thinking. I don’t shop at the Bass Pro Shop. I don’t hunt or fish. And though I can appreciate the art of taxidermy on some levels, I prefer to see these dead-animal tableaux in a natural history museum and not on my way to eat a venison-stuffed mushroom.

Don’t get me wrong. I don’t find the Bass Pro Shop’s décor to be disturbing or barbaric in any way. The night that I was in New York City and saw two people step on, not over, an unconscious homeless person in order to walk into a restaurant — that was barbaric. The Bass Pro Shop, designed to look like a big hunting lodge, is an amazing place. It’s almost like an amusement park, except the animatronics at Walt Disney World are happy woodland creatures; at the Bass Pro Shop, the frozen-in-time animals are on the verge of being devoured.

“It helps you build up a healthy appetite,” my friend Franklin suggested as we huffed and puffed down the staircase on my first visit. I’m so out of shape, I should have been buying sporting goods instead of walking right by the stuff to get to a restaurant. Franklin likes eating at the Islamorada Fish Company because, he says, “It’s like you’ve left Kansas City and gone on vacation.”

I didn’t have that reaction, I’m afraid, because I knew damn well I was in Independence. Still, I grudgingly admired the creativity that had gone into creating a “tropical” ambience at this restaurant. The Jimmy Buffet tunes on the sound system, the weathered wood trim, the cool colors, the 11,000-gallon aquarium glittering with jewel-like fish behind the big bar. It’s a relaxing room, and the servers are young, tan and friendly, as though fresh from some sunny resort.

On that first visit, Franklin and I ate lunch. All the meals, lunch and dinner, begin with Bimini bread, a soft, yeasty loaf baked with a crackly sugar crust. It’s like a big sweet roll; naturally, I loved it. Franklin had a hamburger, and I had a bowl of excellent clam chowder and a plate of crunchy fish tacos. It was a good lunch, not too expensive and definitely an experience.

It was five months before I went back. I had dismissed the place as a novelty, but I have friends who were eager to eat there — including Florida-born Addison, who had some idea that going there would be a nostalgic trip back to his youth in Pensacola. There are, he noticed, a lot of vintage photographs of 1940s-era fishermen showing off their prize catches; one young man stands proudly over his dead hammerhead shark.

And we actually sat under a hammerhead shark, suspended from the ceiling, on the night I joined Georgina, Bob, Addison and Kaite for dinner. It wasn’t a stuffed shark but rather a Fiberglas version of the real thing.

That night, the stuffed items were at the dinner table. First, there were mushroom caps filled with ground venison (I’m sorry, but it tasted like ground beef) and covered in a supple, creamy sauce. And then we stuffed ourselves on crunchy coconut shrimp, fried golden and served with a gooey dipping sauce that seemed to be made from orange marmalade, mustard and horseradish (or something like that). We passed the plates around, but Bob refused to share a single mussel from his bowl of shiny black beauties served in a spicy, garlicky broth.

Kaite did let me take one of the fried fish fillets from her plate of beer-battered cod and chips, which were like any potato chips that come from a bag, though our server insisted the kitchen had fried them; the breading on the fish was surprisingly spicy. “We use our Old Bay spice packet in the batter,” the waitress said. “You can buy it upstairs!”

Kaite wasn’t impressed, but I loved the dish nearly as much as the St. Louis-style spareribs I’d ordered. Those compact ribs were meaty and tender, though the barbecue sauce was so cloyingly sticky and sweet, I wondered if it had been made with melted caramel.

Bob got a good deal with a modestly priced combo of grilled top sirloin — a first-rate cheap little steak — with a few smoky shrimp. Georgina, always the snob, didn’t especially like the menu and complained about the stringy starter of chilled pink ahi tuna slices that she’d ordered in lieu of dinner. “It’s not for the sophisticated palate, darling,” she said.

She didn’t care for the server or the paper napkins and was irritatingly fussy until she finished a cold beer. Addison, meanwhile, gulped down a martini before tackling one of this restaurant’s signature dishes, the Islamorada Portofino: a hunk of pan-blackened tilapia blanketed with a decadent lobster sauce. “It’s excellent,” he said. “The food here is not bad — better than Red Lobster but not quite up to The Bristol’s standards.”

But the place tries so hard — desserts even come with chilled forks. We shared only one, the house-made Key lime pie, which isn’t really a pie but a rich, creamy Key lime tart served in a big coffee cup.

“It’s divine,” Georgina said, shocking all of us into silence. “It’s the best thing I’ve tasted all night. I’d come back to this place just for this. That is, if I could ever find it again.”

Well, I explained to her, “You go down the rustic stairs near the splashing waterfall….”