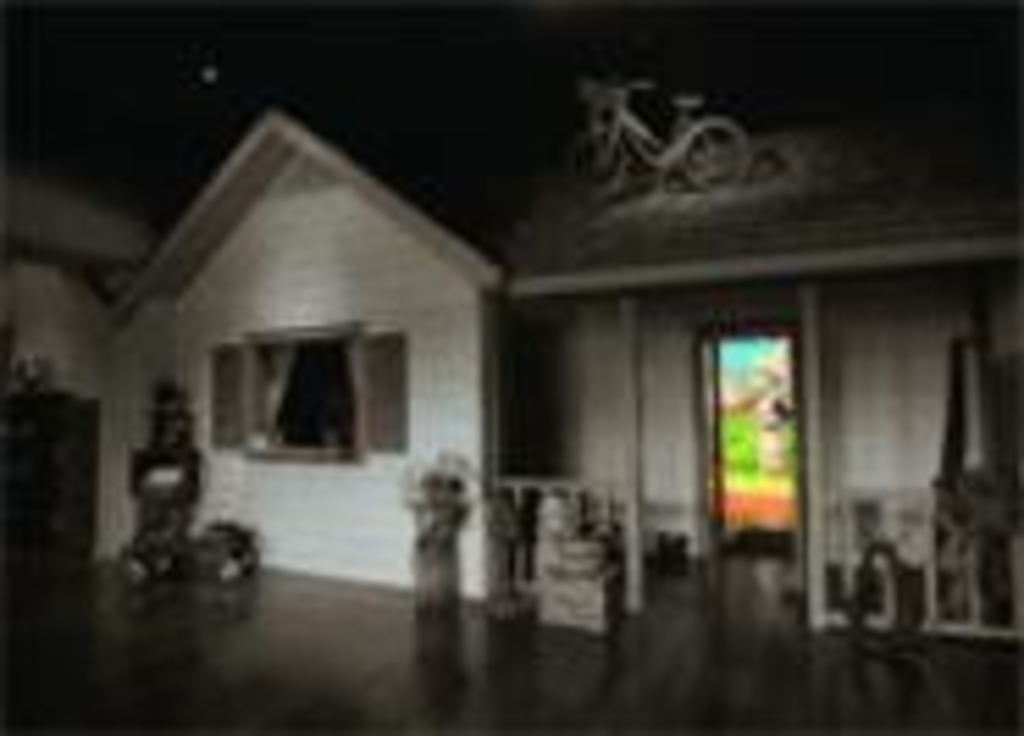 There’s something in The Wizard of Oz for everyone — and something to scare the crap out of everyone. As a kid, I was plagued by nightmares of tornadoes that spoke and struck vindictively.

When Jim Ginavan, director of the Oz Museum in Wamego, Kansas, finds out it was the tornado that scared me, he incorrectly assumes that I grew up on one of the coasts. Kansans, he explains, are not scared of tornadoes. (To which we can only say: The hell they’re not.) A rural Kansan since birth, Ginavan was never frightened by the movie’s weather.

“The tornado didn’t bother me,” he says. “But flyin’ monkeys ain’t natural.”

Ginavan, now a grown man with his own children and a museum to direct, revisits his childhood fear every night. Gallery 3 in the Oz Museum contains a life-sized Wicked Witch of the West cavorting with the life-sized flying monkey who does her bidding. When it’s time to turn off the lights and go home, Ginavan dreads passing through Gallery 3 alone. He swears up and down that the flying monkey’s beady little eyes follow him wherever he goes, even in the dark.

Nonetheless, Ginavan is not the offbeat character you’d expect to be running a museum dedicated to The Wizard of Oz. What’s striking is how normal he is. Not normal as in boring. Normal as in reasonable, well-adjusted. A former art teacher who was called in to help install the museum’s first exhibits, Ginavan’s ascent to the role of executive director has to do with a background in art, not Oz. I learned about him through NPR’s All Things Considered. Interviewer Michele Norris was talking to Ginavan because one of the four remaining pairs of authentic ruby slippers had been stolen from the Judy Garland Museum in Grand Rapids, Minnesota, just weeks before it was supposed to arrive on loan to the Oz Museum for Wamego’s upcoming Oztoberfest celebration.

Ginavan suspected that the slipper thief might have been trying to stop the festival from happening and said he hoped the closet raider would get a conscience. “We’re a small community,” he added.

That line stuck with me, replaying itself like my old tornado dreams. Community? What community? A community of grown men and women who are fanatical Wizard of Oz devotees?

I made the hour-and-a-half drive to Wamego, just west of Topeka, to find out. At the museum, a college-age employee greeted me at the ticket booth and explained that I was standing inside the sepia-toned barn. Then she pointed to the door. “When you walk through that door,” she said, “you’ll be in Munchkinland.”

However unlikely, her prediction panned out. In Munchkinland, an exceedingly creepy Dorothy mannequin stood on some actual yellow brick culled from the famed road. Beyond Munchkinland, my journey was more eye-opening because I discovered that the Oz Museum contains a wealth of genuinely interesting material.

The first Oz book, written by L. Frank Baum and published in 1900, was an immediate sensation. But it wasn’t until 1939, after a couple of generations of kids had pored over a series of 40 freaking books (finished by another author after Baum’s death), that the MGM movie came out. Consider the sensation that the Harry Potter series has created, and its young fans’ excitement when the first movie came out, and then imagine what opening night would have been like if the hype had accumulated over 39 years. One of the museum’s video stations shows footage, shot from above, of crowds flooding the streets before the movie’s opening night. It opened to three generations of fans who weren’t accustomed to seeing all of their favorite book characters come to life on the big screen.

That’s one reason Wizard of Oz spinoffs, merchandise and fandom have outlived most of the movie’s stars. (Only a few munchkins survive; five of them, between the ages of 85 and 90, will be in Wamego for this weekend’s Oztoberfest.) Even if you couldn’t care less about the movie — about Dorothy or her brainless, heartless, gutless friends — its memorabilia span a hundred years of pop-culture history.

The paraphernalia at the Oz Museum is very nearly overwhelming — in a good way. The Wizard of Oz has been translated into more than 40 languages (hearing the Wicked Witch yell at Dorothy in German is even scarier than hearing it in English), and it’s been marketed to oblivion in almost as many countries. The museum takes you through all of that chronologically via display cases filled with coloring books, posters, collectible drinking glasses, lunch-box-and-Thermos sets, marionettes, hand puppets, figurines, bells, plates, sand pails, jack-in-the-boxes — pretty much any kind of movie-tie-in merchandise ever made.

But the museum isn’t just a history of movie marketing. It shows how movies have marketed other things. There’s the photograph of the Seinfeld posse dressed as Dorothy (Elaine), the Scarecrow (Kramer), the Tin Man (Jerry) and the Cowardly Lion (George). Or the particularly unappealing poster advertising Oz peanut butter. You know the look and feel of cookbooks published by Kraft in the 1970s, in which the photos of the food make you want to do anything but prepare, let alone eat, any of the recipes? That’s what this poster looks like.

“Our museum is the merchandise,” Ginavan says. “It’s the coloring books. It’s the peanut butter, for God’s sake. Why do we think that the name Oz can sell peanut butter? But it does.”

The stuff sold at the Oz Museum today is equally baffling. What does it say about this particular moment in history that the most popular items here celebrate the Wicked Witch of the West? Don’t act surprised. You’ve seen the bumper stickers. When was the last time you saw a car proudly plastered with proclamations that the driver is a sweet girl from Kansas who wants, more than anything, to go home?

For a while, the gift shop sold collectible figurines. “People were snapping up the Good Witch, the Bad Witch, Dorothy, Tin Man, the Lion,” Ginavan says. “But nobody would buy the Scarecrow. I couldn’t figure it out. Everybody loves the Scarecrow! But then it dawned on me that nobody wanted to relate to somebody who doesn’t have a brain. Most people buy these as gifts, and nobody wants to say, ‘Here’s a Scarecrow, because you’re dumb as a rock.'”

Other present-day Wizard of Oz mysteries can be solved this weekend at Oztoberfest, for which Ginavan and his staff expect visitors from all over the country. Attractions include the exhibit of dresses worn by Judy Garland for appearances other than her starring role in the movie. There’s the play, with its wire rigging to make characters — and tornadoes — fly. And then there’s the fact that Kansas isn’t really brown.

“You wouldn’t believe how many people we get who expect everything in Kansas to be brown,” Ginavan says. “People who have never been here before are like, ‘We’re so surprised — everything is so green.’ And I’m like, ‘Yeah … what color do you expect grass to be?'”

Of course, he has only MGM to blame. When one of the world’s most-watched movies depicts Kansas in sepia tone and the magical, exciting and dangerous things to behold outside of Kansas in Technicolor, people get funny ideas.