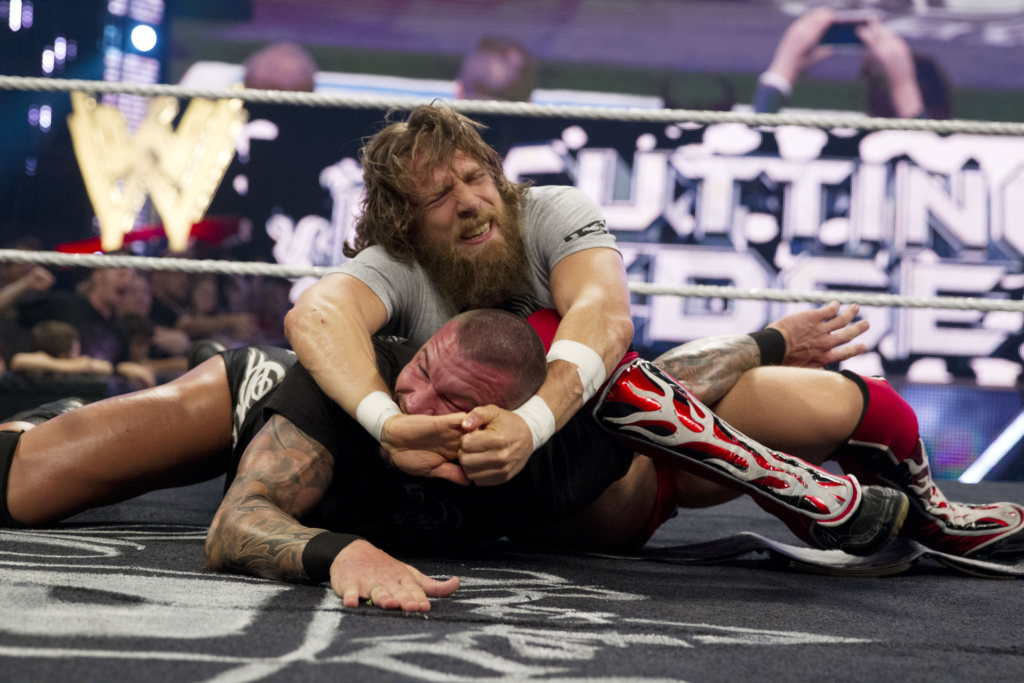 These days, pro wrestling is incredibly self-aware – in and out of the ring. WWE’s main story line is the McMahon family’s rejection of Daniel Bryan (real name: Bryan Danielson) as “the face of their company.” WWE COO Triple H has screwed Bryan out of the WWE championship twice because the 5-foot-10-inch, 210-pound grappler with shaggy hair and a bushy beard doesn’t look like his company’s vision of a wrestler. (Think Venice Beach bodybuilder Hulk Hogan or ripped and veiny The Rock.)

“It’s been a stigma for me for my entire career,” Bryan tells The Pitch. “Even when I started. You’re 5-foot-8, 170 pounds. You don’t look like a wrestler. And it’s interesting to go out there and just through hard work and dedication and skill be able to prove to people and see the WWE Universe all over the world really get behind me.”

WWE crowds have rallied around Bryan as an underdog challenger in his feud with Randy Orton, whose genetics are decidedly more company-approved: 235 pounds of lean, chiseled muscle standing at 6 feet 5 inches. In arenas around the world, fans scream Bryan’s signature “Yes” chant in unison as his “Ride of the Valkyries” theme plays.

“I feel very connected to the crowd,” Bryan says. “And there’s no size or height or amount of muscle that can create that. That just happens organically. It’s sad that some people don’t see it that way.”

Bryan will likely still be fighting the WWE’s power structure when the wrestling promotion tapes SmackDown at the Sprint Center on Tuesday, October 15. Bryan spoke with The Pitch by phone less than 24 hours after Orton dropped him on his head through an announcers’ table as Bryan’s fiancée, Brie Bella, begged him not to on Monday Night Raw. Here are excerpts.

The Pitch: By the time you arrive in Kansas City, you may be WWE champion again. What would that mean to you?

Bryan: Even though I’ve won it twice, I’ve held it for less than 24 hours total. I want to come into Kansas City as the WWE champion. That’s been one of my dreams and aspirations ever since I was a little kid to be able to go into all of these great cities and come in as champion and leave as champion.

It’s crazy to see the people in the arenas doing your “Yes” chant in unison when you come out.

It’s so bizarre. It feels like it’s not even real. It feels like it’s not my life. It feels like I am a character watching my life unfold, and I’m walking down and looking at all of these people and I’m doing the motion myself, but I’m also looking at them going, “What are these people doing? Why are they doing it with me?” Sometimes you get that moment of complete escapism, where it’s almost like I’m looking down on myself in this arena as all this is going on, going, “What did I do to deserve something as awesome as this?”

I imagine your free time is about nonexistent.

I’d say nonexistent is an understatement because right now, we’re on the road usually five days a week. And then I come home, and those cameras are right there. I’m very lucky that I am not featured on the reality show. I am a guest that comes in and out of the shots based on them filming Brie. But Brie, they’re filming her all the time, and it’s brutal. [Laughs.] But it’s a good show, and it’s been doing really well, and I think a lot of good stuff is going to come of it.

Is it hard to sort out your wrestling character from your personal life when you’re on two shows?

No, but it does feel like I live my life for the public as opposed to myself, which is very different from how I lived my life before I came to WWE. Before, I would wrestle all over the world, but then I could go back to my little house in Aberdeen, Washington, and just be me, just be a normal human, and nobody recognized me. I didn’t have to live up to any sort of public persona. Now, even going to the grocery store, people will come up to you, and they expect you to be this character that they’ve seen on TV, whether it’s from Total Divas or wrestling. And the truth is, I’m neither. I’m just this normal dude.

You proposed on a hike. When did you know that’s how you’d propose?

I actually got Brie’s ring back in May, so it’s been several months. The problem is, with our schedule, is finding time to do something special. And no offense to Bowling Green, Kentucky, but I don’t want to propose to Brie in Bowling Green, Kentucky, while we’re doing a live event on a Friday after taking a red-eye flight, and we’re both exhausted. We were both ready to get engaged earlier this year, but I wanted it to be special, and it was worth the wait.

What was it like to have the Total Divas cameras there?

Quite frankly, by the time that that happened, they were barely there because we’d just done a 5-mile hike. Imagine those people, they don’t know where I’m proposing, right? They’re hoping that it’s at the beginning of the hike, but absolutely not. [Laughs.] I waited until we’re at the top of the cliff overlooking the Pacific Ocean, and everybody’s drenched in sweat, and they’ve got the cameras and sound stuff, and nobody was even sure that’s when I was going to propose. They just had to film us that entire time. It was almost like my own practical joke on the reality-show people to make them hike this far with all of this equipment, and then that’s when the biggest moment happens, when they’re completely mentally and physically unprepared for it.

Continued: Bryan talks about his beard, potentially shaving it and whether he’s reached the level of a bus guy.

[page]
Your beard has become a big part of your character. Did you foresee that happening when you started growing it?

No. Absolutely not. I just started growing my beard because I was tired of shaving. Then I kept growing it, so I could grow out the hair on the top of my head. When you have a shaved head and you start growing out your hair, it goes through that awkward stage. I was like, ‘If I keep growing out my beard, nobody’s even going to notice that I’m growing out my hair.’ And true to form, nobody did until it was past the awkward stage because everyone was looking at my really awkward beard. [Laughs.]

How much maintenance does it require?

I don’t do anything to it, other than I do have to trim my mustache. The rest, I literally let it freely grow. Brie … loves the beard, but she thinks that it’s time to start trimming some of the sides and stuff.

Will you have to shave it for the wedding?

It’ll be interesting to see if she wants me cleanshaven for the wedding or not. I don’t know if I could shave my beard right now if I wanted to. We’re filming SmackDown tonight. Imagine if I just showed up to the arena tonight cleanshaven, how mad everyone would be. [Laughs.] It’s no longer something that I can control myself. I have to accept that this is what I am.

I would figure that you’d eventually have to shave it on TV.

Have you reached the level of a bus guy yet?

No, and I don’t know how you get to the level of being a bus guy. I do OK, but I’m somebody who saves my money. It’s hard to justify that expense. Think of this: You’re renting a bus and a driver to take you around 200 days a year. When you’re trying to compute the cost of what that might be, it’s very, very expensive. For me, I’ve been working most of my career not making very much money. [Laughs.] And I’ve been wrestling for about 14 years now. So I need to be able to save for retirement. I don’t have any other job skills. I’ve been wrestling since I was 18. This is it.