Bill Eadie lived several professional-wrestling lives, performing as the Masked Superstar, Super Machine, and most notably to children of the 1980s and 1990s as Ax of Demolition in the then-WWF during the golden era of Hulkamania.

These days, Eadie and his partner Smash (aka Barry Darsow) are still working the wrestling circuit. Though they don’t wrestle as much, they do autograph signings, fan fests and Q&As, like the one they’ll do for Metro Pro Wrestling at the Turner Rec Center Saturday, June 4. (The meet and greet is at 4 p.m. and costs $30; a ticket to see the matches, which start at 7, is extra.)

“We enjoy getting away from home and staying on the road a little bit,” Eadie tells The Pitch. “I’d say we’re out about 18 times a year. We enjoy meeting the fans and talking to the fans. They always tell us stories, and it’s nice, because we were too busy doing it to remember.”

This will be one of the special occasions in which the reunited Demolition is in action. In celebration of Metro Pro Wrestling’s sixth anniversary, Ax and Smash team with the Commission against Davey Vega, Mike Sydal, Shizukha and Singh.

When Demolition debuted on the WWF circuit in 1987, they were promoted as bad guys. That didn’t matter to fans, who still cheered them. The team had a cool factor that transcended pro wrestling’s world of good and evil. It didn’t hurt that they came to the ring dressed in black studded outfits, wore face paint that made them look like a 1980s death-metal band and walked to the ring to a heavy metal theme by Rick Derringer.

“It was the kind of gimmick that once the music started and we walked out, I think people realized that we were going to tear somebody’s rear end off,” Eadie says. “A lot of people respected that.”

“Jimmy Hart and Rick Derringer were friends,” Eadie says. “We were in Madison Square Garden one night, and Jimmy says I’m working on this song for you guys. He went through a rough cut and we said, ‘Boy, that’s really good.’ And he says, ‘I think I’m going to try to get Rick Derringer to do it.’ Of course, I was a Rick Derringer fan. My two daughters were still in high school at the time, and they played it all of the time on the local radio station.”

By 1990, Demolition had reigned as WWF Tag Team Champions multiple times, but Vince McMahon’s wrestling organization had signed another top tag team in warpaint: the Road Warriors (aka the Legion of Doom). A dream match of the two face-painted teams seemed inevitable. But that pairings fell flat.

“There has to be some kind of an electricity between the teammates or the opponents,” Eadie says. “Everyone thought that [Hulk] Hogan and [Ric] Flair were going to set the world on fire, and Demolition vs. the Road Warriors was going to set the world on fire. And both series sucked. We’ve talked with [Road Warrior Animal] Joe [Laurinaitis] a number of times, and the chemistry wasn’t there. It wasn’t that we disliked each other or Hogan and Flair didn’t like each other. It could have been postponed for a period of time and the anticipation would have made it better. But sometimes you can’t give the fans what they want. You have to lead them, not let them lead you.”

Around that time, Ax became more of a manager as a new addition was brought in to team with Smash — Crush. The circumstances around the change were never clear. Eadie says his health was a factor.

“I made 44 trips to Japan, anywhere from two weeks to eight week,” he says. “I consumed a lot of sushi or shellfish. Unbeknownst to me, I had developed a toxic buildup of iodine in my system, and I had a shrimp and lobster dinner and had an anaphylactic reaction to it and ended up in the hospital when my heart stopped. The doctor told me that it was from eating shrimp and shellfish over the years.

“Crush was a good guy, but he was thrust into a position that he really wasn’t ready for,” Eadie adds. “It’s hard to replace anybody, but you can’t jump into the No. 1 or No. 2 or No. 3 slot and not be ready for it. His interviews weren’t as polished, his work wasn’t as smooth. It wasn’t against him. If he’d been given time.”

In 1970s, there was still a mystique behind professional wrestling. Eadie, then wrestling as the Masked Superstar, says it wasn’t hard to keep the business’ secrets, even though he lived in Stone Mountain, Georgia, with wrestling celebrities Bobby “the Brain” Heenan and Stan Hansen as neighbors. 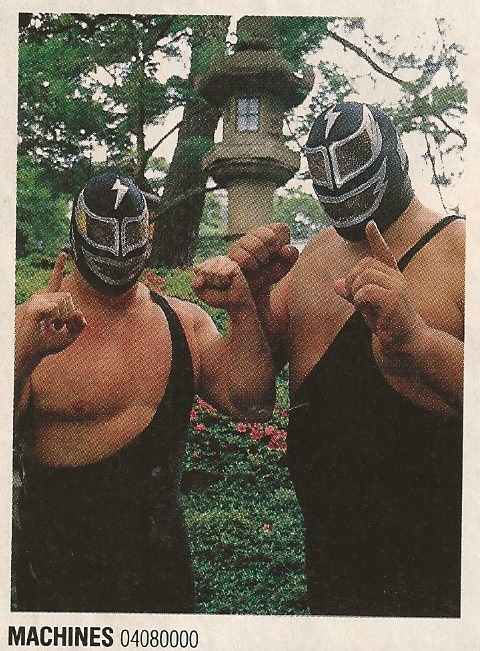 “It’s your business, it’s your job, so if you want to be successful at it, you have to protect it,” Eadie says. “In my situation, they had no identity. They had no reference point. I wore the mask, and I’d go travel down the road. Sometimes people would try to follow you, so I’d keep it on until they got far enough away that they gave up and then took the mask off. I always always stayed in hotels away from the other guys and traveled by myself or with Boris Malenko or Bobby Heenan. Of course, they recognized Bobby, but we tried to stay by ourselves. I figured, it’s my job. If I don’t protect it, who’s going to protect it?”

In the mid-1980s, Eadie found himself again under a mask in the Machines tag team, partnering with Andre the Giant.

“Everyone knew who we were,” Eadie says. “

But that didn’t sink interest in the pairing, which started in Japan.

“Vince [McMahon] heard of it and wanted to do a version of it in the states, and he sent Gene Okerlund and we did some interviews,” Eadie says.

That led to matches against the devious Heenan family and new incarnations of the team with Roddy Piper, Hulk Hogan and others joining the team under masks . The Machines run was short lived though as Andre was set to film The Prince Bride.

Of course, Eadie has an Andre story — one that fits into the Giant’s mythical cannon.

“We were in Montreal, and Japan had sent a couple of photographers and newsmen over,” Eadie says. “They were bugging him and bugging him. Andre didn’t eat that much. He drank considerably, but they wanted to see how much he ate. So we went to a nice restaurant up there, and he ate a nice portion, but not a giant portion. But the thing that impressed them was he drank 101 beers during the dinner. So that sort of stuck out.

“It was like one swallow [for him],” Eadie adds. “So he had 101 swallows. I very rarely saw him drunk. I’ve seen him tipsy before, and you don’t want to get behind him if he’s tipsy.”

Does Eadie hope for an induction into the WWE Hall of Fame?

“It’d be nice,” he says. “But we have no control over it. Barry and I don’t have any contact with them at all. They don’t call certain people, and we’re certainly not going to call them. If we get in, fine. If we don’t, we all know that we had a good, successful career. It’d be a good footnote, it’d be a good asterisk, but it’s not going to make me lose sleep. I hope we get the call.”