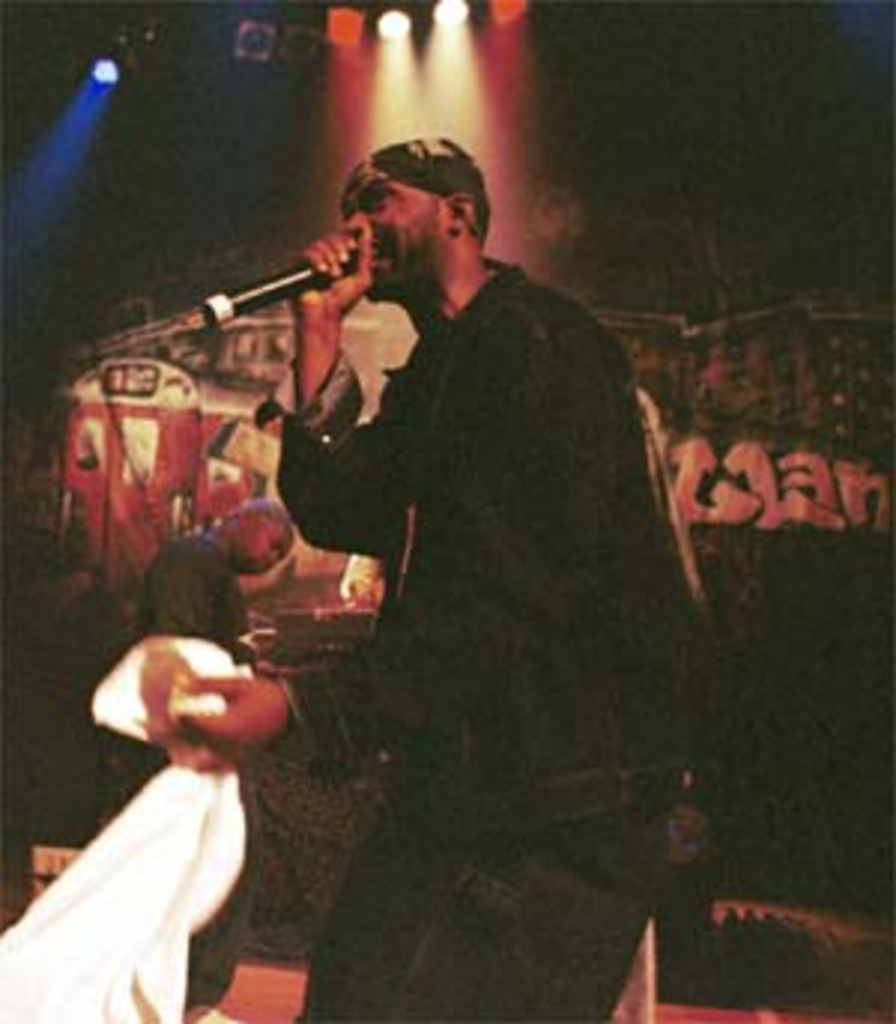 Vibe once named Wu-Tang Clan the worst live act of the year, reasoning that it’s hard to wreck shop when you don’t show up for your gigs. Point well taken, as area fans were frustrated by another mysterious cancellation that moved this concert from last Tuesday to Monday night. However, what giving this hip-hop collective that dubious honor doesn’t acknowledge is that when the planets are aligned just right, the Wu can rock a club like absolutely no one else. At Liberty Hall, this nine-man crew kept a capacity crowd in constant motion for two hours, dropped freestyles that affirmed its status as the world’s finest group of lyricists, and kept it real, eschewing the light shows, dancers, and encores mainstream acts often employ.

RZA, human thesaurus and musical mastermind, was the first to take the stage, ripping through his verse of the sublime Wu-Tang Forever track “Duck Seazon” before performing three tracks from his solo effort, Bobby Digital In Stereo. With protégé Mathematics behind the turntables, RZA shouted a spirited rendition of the incendiary “Domestic Violence,” smoked a joint passed through the crowd after getting a light from a security guard, then passed the mic to GZA, who incited the wildest audience reaction yet by kicking a verse from his solo masterpiece, Liquid Swords. After a stirring delivery of “Breaker, Breaker,” the banging single from his otherwise lackluster third effort, Beneath the Surface, the MC known as the Genius cleared the way for Inspectah Deck. Although he’s a relatively anonymous member of the Clan, Deck obviously has his group’s respect, as he was designated the leadoff hitter on such posse cuts as “Protect Ya Neck” and “Triumph.” The Inspectah did a blazing recital of his “Protect Ya Neck” lines, performed the obligatory solo single, then cleared the way for the equally slept-on U-God, whose voice was dazzlingly clear and commanding.

Mathematics dropped the beat for Ghostface Killah’s “Winter Warz,” inciting a frenzy as fans assumed the Clan’s most accomplished solo member was on his way out, but they had a while to wait. Only U-God and 10th man Cappadonna (on board because Ol’ Dirty Bastard remains in lockdown) delivered their parts of this lengthy showcase joint. Cappadonna, frustrated by the crowd’s understandable inability to confirm that their mothers had warned them to never the leave the house without a vest on, instead led the fans in chants of “Fuck you” and “Suck my dick.” Those who assumed the Wu would be above such banter actually were correct, as Cappadonna responded, “See, y’all like to say that dumb shit.”

After Raekwon and Ghostface finally emerged to offer live renditions of their classic cuts, the full-strength lineup finally assembled on stage for a high-energy performance of “Wu-Tang Clan Ain’t Nuthin’ to Fuck With.” On this tune, which included the evening’s first appearance by golden-voiced Method Man, all nine rappers, and the DJ Mathematics, bounced to the beat, looking much more like genuine hip-hop heads than self-assured superstars.

In keeping with his man-of-the-people image, Method Man punctuated “Bring the Pain” with a stage dive, then ventured into the crowd on several other occasions. Now officially warmed up, the Clan offered fans one off-the-hook album track after another, with “Reunited,” “C.R.E.A.M.,” “Tearz,” “For Heaven’s Sake,” and Raekwon’s “Ice Cream” all delivered with pinpoint accuracy and unrivaled energy. Interspersed between these cuts were more solo cuts by Ghostface, as the rest of the Clan wisely recognized his Supreme Clientele is not only the best Wu effort in years but also 2000’s best album.

When the Wu performed a jaw-dropping run-through of the 1997 gem “Triumph,” on which six Clan members took a turn on the mic, it seemed as if little was left for the crew to accomplish. However, they instead turned things up a notch, with RZA concocting two furious freestyles and U-God, Raekwon, GZA, and Cappadonna following suit. The crowd that had greeted all of the beat-driven tracks with earwax-melting applause now sat in stunned silence and witnessed this explosive display of lyrical dexterity. Then, after RZA noted and applauded the diversity of the crowd and the peaceful environment, the group killed the lights and closed with the soulful “Can It Be So Simple” with only lighters providing illumination. It was an ideal ending to a near-perfect show that left Wu fans fiending for the group’s next release, The Wu, which RZA revealed will hit the stores on November 7.

Killarmy, a Wu-satellite group, also has a third album on the way, and it unveiled the lead single, “It’s Militant,” in sprawling stop-and-start fashion. This seven-man crew opened with a few seconds of its best song, “Wake Up,” but lamentably never returned to this tune after this initial tease. Instead, it rattled off verses from tracks from its first album, Silent Weapons for Quiet Wars, which it optimistically described as a classic, saving only a minor segment of the program for tunes from the seldom-heard follow-up, Dirty Weaponry. Although the group delivered an adequate set, it was rather disappointing not to see U-God, Masta Killa, or Wu runner-up Streetlife emerge for cameos as they did on the albums, and what freestyle fury it mustered fizzled in comparison to the all-out assault that was to follow. For its part, Killarmy was disappointed in its draw, complaining frequently that the sound system was too subdued and the lights were too bright. Still, the group remains a solid second-tier hip-hop act, and its fiercest soldier, P.R. Terrorist, can hang with the big dogs when it comes to vocabulary and delivery.

The area’s answer to the 36 Chambers, Topeka’s DVS Mindz, delivered a fierce set teeming with intensity and emotion. Using stop-and-start beats and group recital in an impressive fashion, the crew spit fire on tracks such as “Tired of Talking,” and its DJ showed and proved on the turntables after the set was done. Like Wu-Tang, DVS treated fans to some “real live a cappella hip-hop lyrics,” with one rant that blasted the music industry for sleeping on the Midwest and several others that brutally lambasted Pitch writer Shawn Edwards, who the group felt gave it a bum rap in his piece “One More Chance.” Fortunately, DVS Mindz shouldn’t have much cause for giving other scribes the kind of treatment Eminem gave XXL and Billboard‘s Timothy White, because its beats and rhymes were tight enough that even jaded critics probably couldn’t stop themselves from bobbing their heads. This was the group’s big-time showcase, and it proved to a tightly packed crowd and two touring bands that it deserves major-label interest.