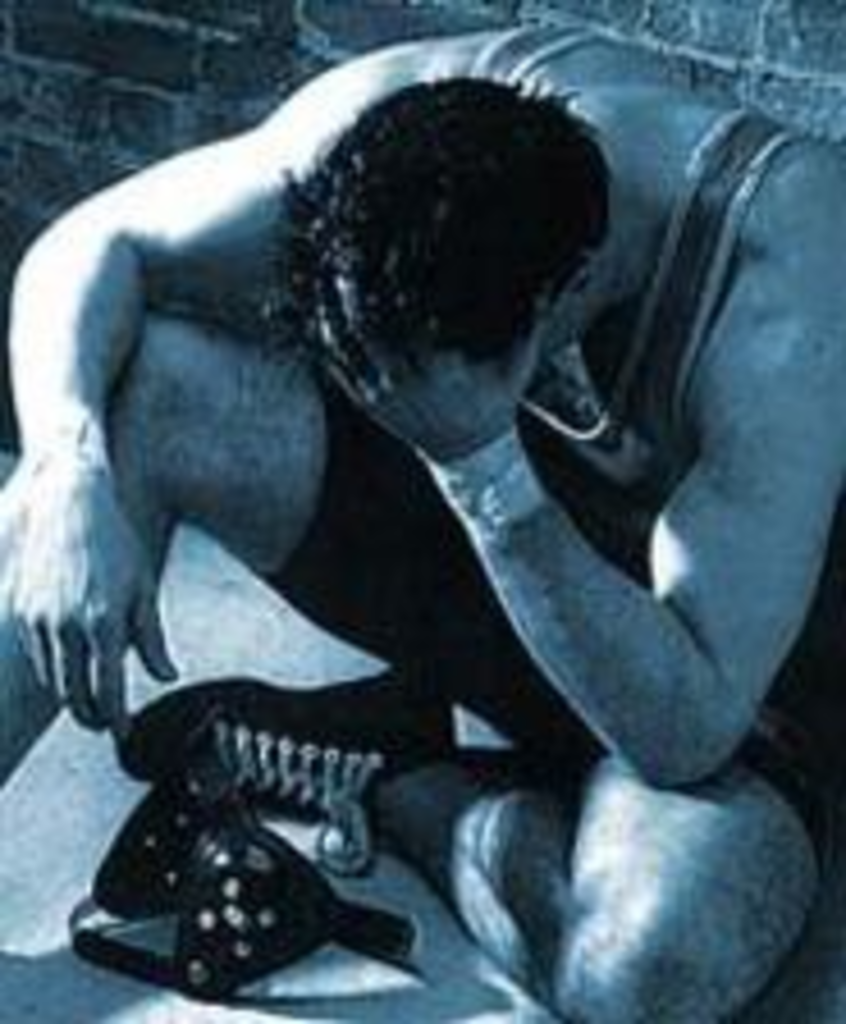 The Coterie Theatre ventures into a tough venue in its world-premiere production of Laurie Brooks Gollobin’s The Wrestling Season. The Coterie, which has developed the reputation of not shying away from tough issues that face today’s youth, takes on a show that grapples with the struggles of peer pressure and rumor mills that can shape and destroy young people’s futures.

Using high school wrestling as the setting was a wise choice for this message, because the play deals with violence and control. In this production the cast performs in the round, adding to the “in your face” presentation. For one of the few times in theater audience members can truly feel as if they are voyeurs in the world before them. The world described is that of eight high school students who endure and fight to survive the undertow of adolescent development.

The plot lines are as simple as the solutions are complex. One student is accused of being gay, another of being “easy.” One boy lives his life and goals for his mother, others live their lives through the destruction of others’. The one basic theme is the struggle for identity and the lengths people will go to change theirs, for identity often is something others give us, when in reality, we don’t even know who we are.

The playwright does well in creating a world in which young people speak and act realistically. This play never felt preachy or written by a different generation. Gollobin is a writer with a true sense of how young people speak and handle confrontation. It was nice to see that the play brought together a diverse audience in a post-show “talk back” session. During the session, the room filled with ideas about what happened on the stage and seemed to have a stake in the play’s outcome.

The cast gave a true ensemble performance that left all in attendance appropriately uncomfortable. Not since the film The Breakfast Club have I seen a collection of actors contribute so much to the tapestry of character development that aided in the message that we are all here together and that tolerance and understanding can keep us at peace.

Throughout the play the character of The Referee (Anthony Guest) circles the action and comments in “referee speak.” At the beginning this device seems jolting, but minutes into the production it becomes a strong tool used to bring to the forefront the ideas and themes that make this production valid. Joshua F. Decker (Luke) struggles well with the accusations of being gay. It is in his silence that his strength shines. His respect for the role is obvious as his character struggles with the desire to protect his friend and still understand his own life.

David McNamara gives an equally strong performance as the classic anti-hero, Matt. His character struggles through many decisions and choices and ultimately makes a monumental mistake that fuels the post-show commentary.

Director Jeff Church adds a strong sense of choice to the production, which is not afraid to take a stand. Church seems to stir in all elements of conflict, adjust for sight lines, and step back to let the pot come to a boil. It was also under his direction that some of the play’s most interesting visual elements came to be. Working with associate director and wrestling coach Leigh Miller, Church’s wrestling sequences were reminiscent of classic Rocky films.

Art Kent’s lighting design was simple and served the play well. This was not a play about anything besides words and actions.

Dan Eslinger’s set was simple as well: a wrestling mat, some lockers, and a couple of wooden platforms. No set elements were overtly noticeable, and that worked just fine.

David Kiehl’s sound design was the technical element that was most noticeable, in that it became integral to the wrestling scenes. Kiehl’s choice of music was well constructed to add about 30 beats per minute to the audience’s average heart rate when necessary.

From open to close, this production is a case study in what can be done when putting together a production for young minds that also helps older audience members understand the rough course young people must travel. Never before has the mantra of “sticks and stones” seemed so trite. Names can indeed hurt, break, and destroy.

at the Coterie Theatre