Union members rejected a contract offer and walked off the job this week complaining about stagnant wages and sometimes being forced to work six- and seven-day weeks. 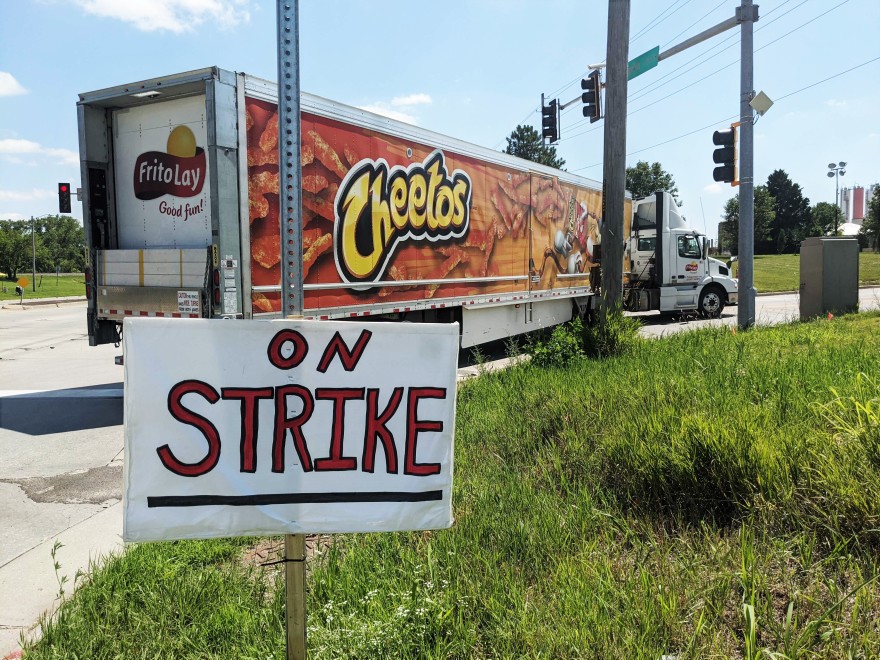 Hundreds of workers at the Frito-Lay facility in Topeka are on strike. // Courtesy of Abigail Censky

More than 500 workers went on strike at the Topeka Frito-Lay plant this week demanding higher wages and more limited hours.

Strikers picketed outside a warehouse entrance, hoisting signs that mocked Frito-Lay branding like Chester Cheetah and pressed for public support for pay hikes and less overtime.

“Why can’t I get a day off?,” said Charles Taylor, who operates machines that process Doritos and Tostitos. “We can’t even get one day off, how does that make sense? A machine shouldn’t be treated better than their employees.”

Union membership rejected a contract offer from the company, saying the included annual 2% wage increases were too small. The increase, for many workers, would be less than 50 cents per hour.

In an emailed statement Tuesday, the company said it is “confident that its wage rates are competitive for the Topeka market.”

The union had been working under a contract extension that expired Monday. That’s when workers walked off the job. Under the contract that just expired, members of the bargaining unit earned as little as $16.33 an hour up to $38.42 depending on the job classification.

Workers like Tracy Johnson, who’s been at Frito-Lay for 30 years, say they’ve been long overdue for significant raises.

Starting about a decade ago, contracts negotiated by the union shifted from hourly wage increases to lump sum payments to workers at the start of every two-year contract.

“When they gave us that very first lump sum they basically told us, we’re not going to give you a raise,” said Menard Reynolds, who’s worked at the plant for 21 years.

Some union members have also pushed for an end to forced overtime or getting scheduled to 12-hour shifts with only eight hours off in between.

Hall, the union president, says the tentative agreement rejected by workers capped overtime to 20 hours on top of a 40-hour workweek. The company’s management said in its statement that “it was Frito-Lay, not the union, that proposed overtime limitations.”

The statement called union leadership “out of touch” with employees. But Hall said it was Frito-Lay parent company PepsiCo’s vice president of labor relations, Carolyn Fisher, who told union leadership and members of the negotiating committee to recommend the agreement to members even after they told her it would likely fail.

“We told them that this was gonna happen,” said Hall.

In its statement, Frito-Lay said the company would focus on “continuing to run the operations of our plant in Topeka” but Hall said the plant hasn’t been fully operational all week because it’s missing most of the workforce that ordinarily runs the plant.

He said the company has terminated the health insurance of employees on strike in an attempt to force workers to cross the picket line. Currently, there are plans for a meeting on July 19 after the company initially said it didn’t plan to negotiate with the union “for the foreseeable future.”

“They say they care about their employees, but then they treat us like this,” said Hall. “Then they try to pull the wool over our eyes at the negotiating table every three years.”

This piece is reprinted with permission via KCUR. The Kansas News Service is a collaboration of KCUR, Kansas Public Radio, KMUW and High Plains Public Radio focused on health, the social determinants of health and their connection to public policy.