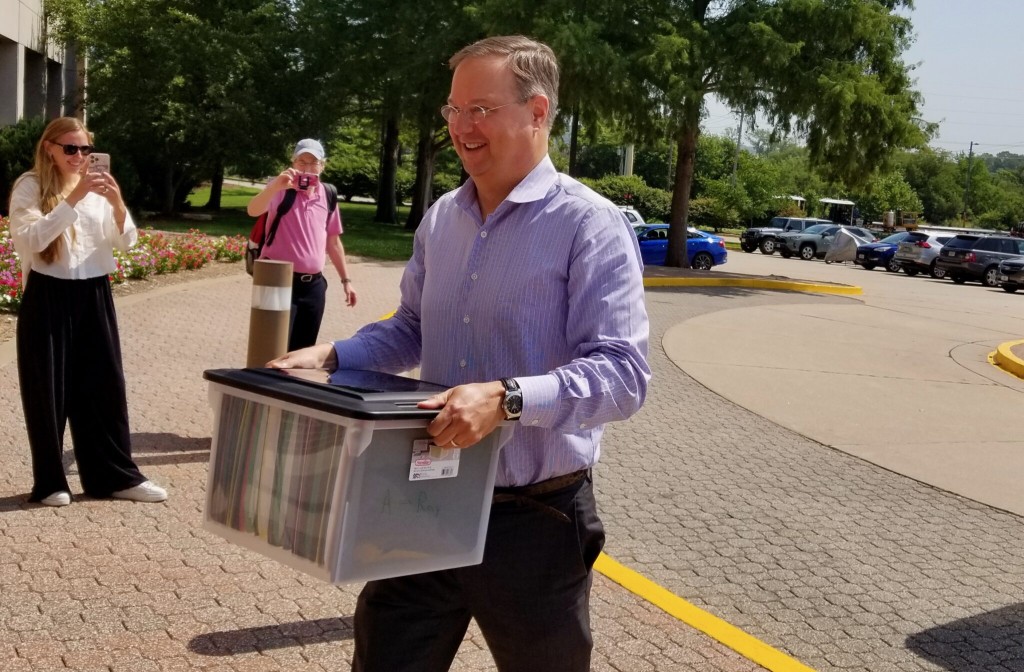 Independent U.S. Senate candidate John Wood said the results of Tuesday’s primaries won’t alter his campaign plan as he seeks to become the first person in modern Missouri history to win a statewide race without a Democratic or Republican label.

On Monday, Wood delivered three boxes that he said had 22,000 signatures on his petition for a spot on the November ballot. If there are 10,000 valid signatures from registered voters, he will be listed alongside the Democratic and Republican nominees, who will  be selected Tuesday, and the Libertarian and Constitution party candidates, who are unopposed in the primary.

“There’s a real thirst among Missouri voters for an alternative to the extremes and the divisiveness that they’re likely to get from the two major parties,” Wood told reporters as he waited to turn in the signatures.

Wood, a St. Louis County native currently living in Kansas City with his wife and two children, responded to former U.S. Sen. Jack Danforth’s call for a center-right candidate to enter the Senate race to replace Roy Blunt, who is stepping aside. Danforth cited polling that he said showed an independent candidate had a chance and promised to back the effort with funding.

Wood was U.S. attorney for Missouri’s Western District from 2007 to 2009 and before that held several roles in the George W. Bush administration. He was working as general counsel for the U.S. Chamber of Commerce when he stepped down in September to become senior investigative counsel for the Jan. 6 committee.

While he was the chief lawyer for the committee investigating the insurrection, Republicans vying for the GOP Senate nomination have been courting an endorsement from former President Donald Trump, which is now expected before polls open Tuesday.

“I’m guessing he is not going to endorse me,” Wood joked to reporters.

Only one poll has been published publicly that tested how Wood has done since entering the race in late June and after nearly $5 million spent by Danforth’s political action committee, Missouri Stands United, on his behalf. From SurveyUSA, it showed Wood taking 9% to 13%, depending on the winners of the Tuesday primaries.

“I’m really eager to see who I’m going to be running against,” Wood said, “but it doesn’t change anything about what we’re gonna do.”

Wood said he is confident he can win in November. While he will disagree with Democrats on many issues, Wood said he thinks he can appeal to more liberal voters with the message of making government work.

“We’ve got two parties that have become the Democratic Party dominated by the Bernie Sanders wing and the Republican Party being controlled by the Ted Cruz wing, and nobody wants to sit down and talk to each other and get things done,” Wood said. “I want to be part of a governing coalition.”

Total spending in the primary is above $47 million, including the $5 million spent by Danforth, who has said he intends to raise $20 million to $40 million on Wood’s behalf.

But first, the signatures must be checked. Wood said he was confident in the result, despite the difficulties for efforts to put marijuana legalization and ranked-choice voting on the ballot. Only about 52% of the signatures on those petitions were valid.

Wood said he did not personally circulate the petitions. He didn’t actually sign it, either, he told reporters.

“If we are one short,” he said, “I am really going to regret that I didn’t do it myself.”