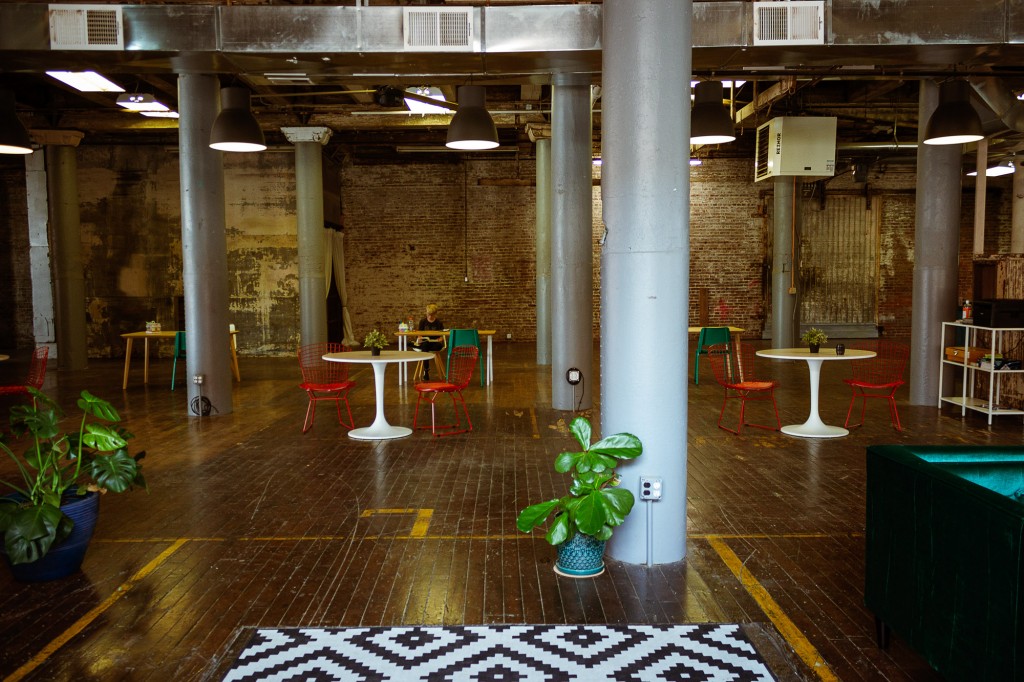 Coworking is no new trend to Kansas City, and it isn’t hard to find a desk at one of the 20-something coworking businesses scattered across the metro—like Plexpod and WeWork. But womxn-run and womxn-focused coworking spaces are, and these collectives are supporting and uplifting local womxn in business. 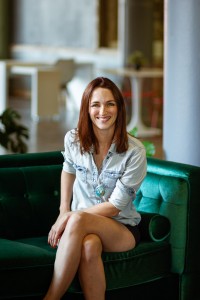 Firebrand Collective, located in the West Bottoms, was founded in 2016, first as a space for photographers to share a studio, before transitioning to a two-story office filled with private rooms, scattered desks by big windows, and enclosed conference spaces—tailored for womxn.

“The main thing that we offer is a place, not just a place to work, but a place to work that also has a community built around,” founder and owner Megan Adams says. “It’s filled with womxn specifically who are in the same brain space. That’s really what makes coworking work, and that’s why we spend so much time here really thoughtfully building our community.”

Firebrand’s female focus was a direct response to the face that coworking used to be nicknamed “bro-working.”

“When you walked into coworking spaces, they were very masculine. They had a masculine energy. Most of their members were men,” Adams says. “So the obvious answer was to create a space that is specifically—it’s not exclusive at all, that’s never been our intention—but it is made for womxn.” 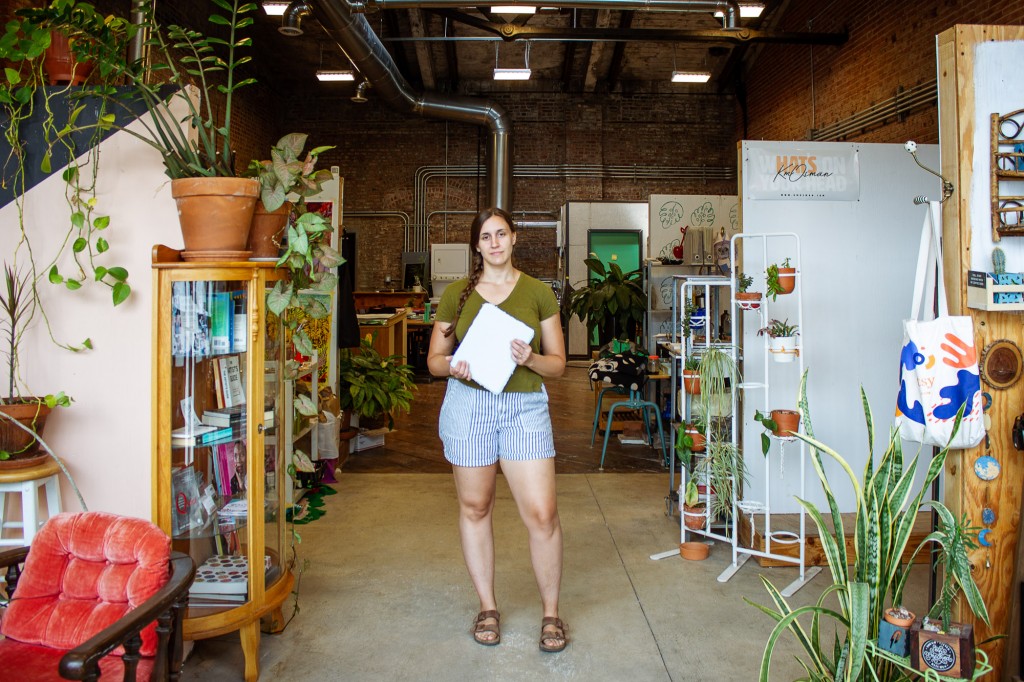 Kelsey Pike, a papermaker and art teacher, founded Cherry Pit Collective for similar reasons. Her business Sustainable Paper+Craft needed a studio space with water drainage, but she also missed the collective feel of art school—where other artists could easily collaborate with each other. Maker Village, located at 31st St. and Cherry, was looking to rent out part of their space in 2016, and so the Cherry Pit Collective was formed. 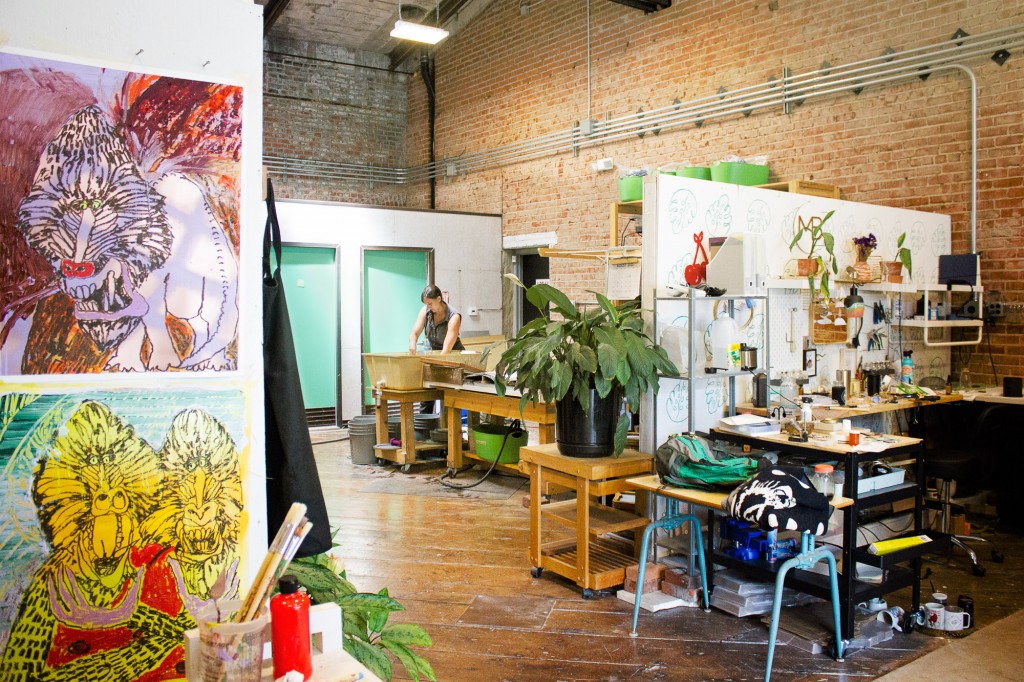 “The intimacy of personal connections is different. Because we specialize in artists and crafters, it’s even more so. Everyone who’s there already has that in common,” Pike says. “But also because we’re womxn-centered. Everyone can feel very safe and comfortable, being themselves, because we know there’s no men there.”

The space didn’t start that way, but after having two men at Cherry Pit not work out early on, members put it to a vote and decided to focus on creating a space for womxn and minority artists and makers.

“Representation is so important. We get asked a lot, like, can our girl scout troop come in visit? We just want to have them see you all doing your thing. And I think that is huge too. Just the visibility of we’re all womxn running our own businesses, doing this thing. And to us, it kind of feels like a small thing,” Pike says. “But to a lot of people, it’s a big thing.” 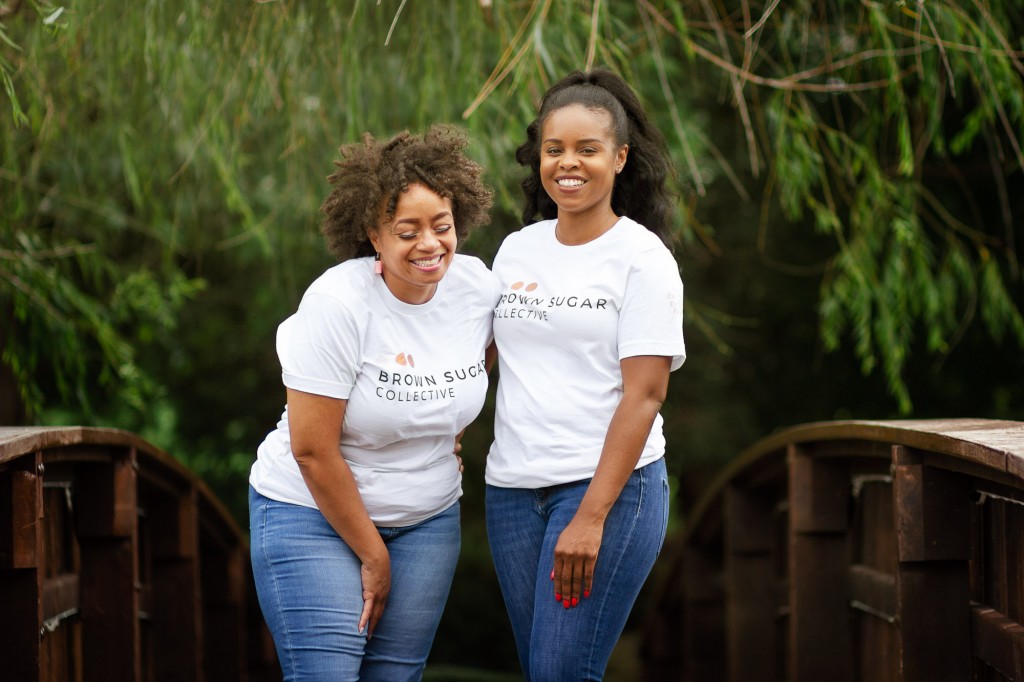 A need for representation is what fueled the creation of the Brown Sugar Collective, a new networking and collaboration collective focused on supporting Black womxn and womxn of color. Founders Ashley Rudd and Xavier Campbell had attended local networking events, but noticed something glaring missing.

“We didn’t see people that look like us there,” says Rudd, who works for Kauffman Scholars and runs her personal-shopping startup and online shop She’s Thrifted.

Brown Sugar Collective launched in April of this year with a virtual Lab, where womxn came together to cowork, bounce ideas off each other, and support the projects they were working on. Their first in-person event was hosted at Firebrand Collective in July, where Campbell and Rudd are now members. 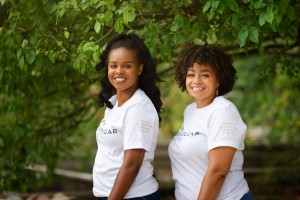 “Within the diverse community, not even just Black womxn, but all womxn of color, there’s so much talent within that realm,” says Campbell, who works for Literacy KC and runs an event planning company called Phenomenal Occasions. “And I feel like, not really like they’re being held back or anything like that, but like the resources; they don’t know the routes to find the resources. Maybe they don’t have the courage or confidence to even get that route. So building a support group for womxn to let them know that they can do it and we’re right here with them.”

The virtual labs or in-person events help womxn learn how to file an LLC, get a business license, or connect over shared interests. At one event, a member found the name for her business—thanks to group collaboration.

“[Ashley] shared her idea of getting womxn of color together to support one another and I immediately thought she was onto something pretty great. Once her and Xavier linked, the vision flourished into what you see now,” says AshleyMarie, founder of Cultivate Vision, a coaching service. “I attended the Brown Sugar Lab in June. I was able to create the framework for my event during the two collaboration hours.” 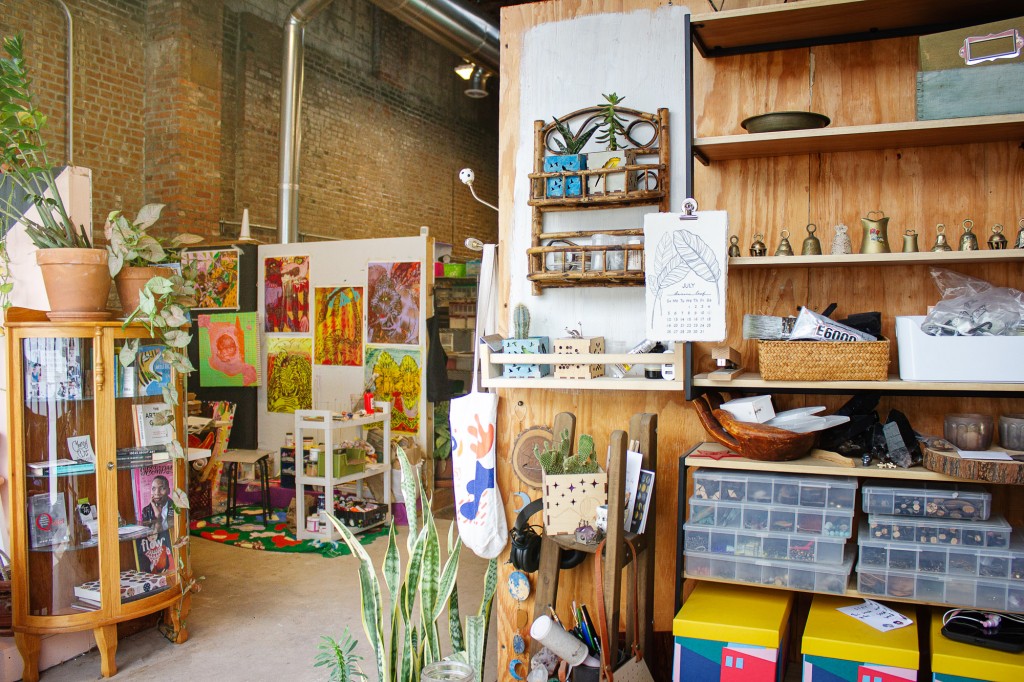 The view from the studio of Tara Tonsor, Cherry Pit member and artist behind Lost & Found Design. // Photo by Kelcie McKenney

Resources are one of the key benefits of coworking. At Cherry Pit Collective, members who are fresh out of art school benefit from seasoned artists sharing knowledge—like ways to market their craft on Etsy, how to promote themselves on social media, and how to run pop-up events.

“My business has benefited in ways I never expected. I’ve received more opportunities, I’ve been able to teach workshops, and I’ve been able to collaborate with over probably eight members of the collective,” says Tara Tonsor, Cherry Pit member and artist behind Lost & Found Design. “It widens my mindset about what my business can stand for—not just a maker who sells something to you, but a small business brand that supports the economy of this city and engages in active relationships with other makers. Cherry Pit Collective makes me feel connected.” 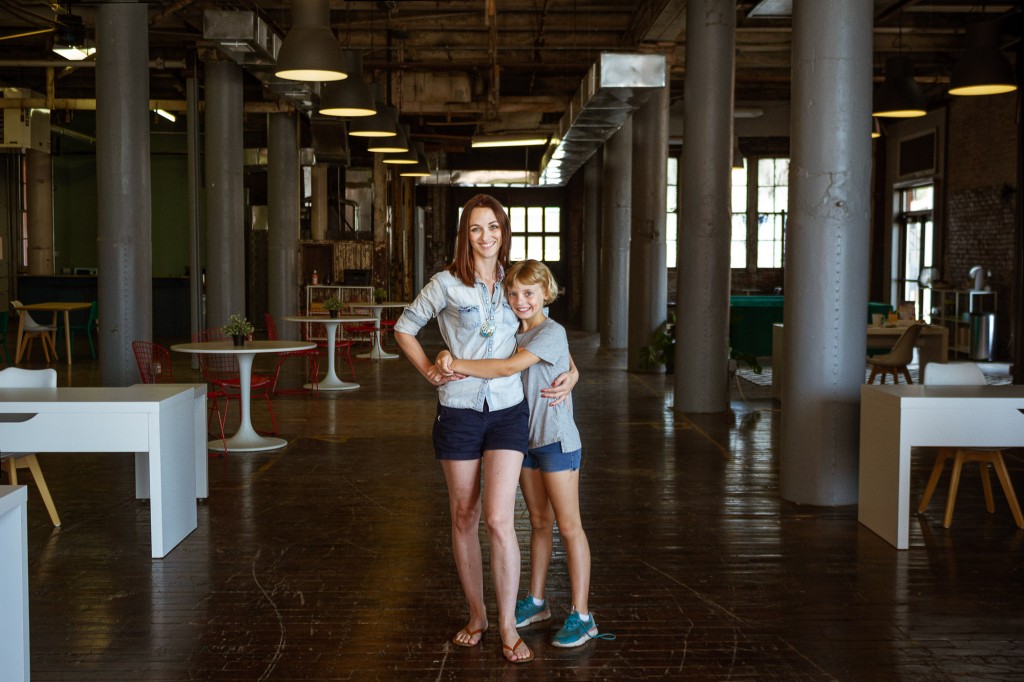 Megan Adams started Camp Firebrand as a way to provide work space and community for working moms. Here she poses with her daughter at Firebrand Collective. // Photo by Kelcie McKenney

In August, Firebrand Collective launched Camp Firebrand as a way to create space for working moms. On Tuesdays and Wednesdays, members and those who grab a $20 day pass can bring their kids to work. Firebrand offers snacks and “busy boxes” filled with crafts, pom-poms, and playdough to keep the kids busy, while mom can get work done. 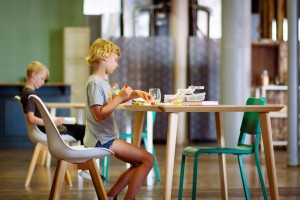 “It made sense opening the space up a couple of times a week, just to be kid friendly and to allow parents to bring their kids into a space that is nonjudgmental,” Adams says. “If your kid throws a fit, we all have kids here, and you’re not going to be getting side-eye.”

Firebrand plans to roll out more virtual programming, courses, and events later in October. Brown Sugar wrapped up their second social at the end of August and have monthly Labs coming up for networking, collaborating, and creating. Campbell and Rudd are also working towards a nonprofit status. Cherry Pit Collective is considering building a loft in their space, which has ample room due to it’s 30-foot ceilings. The build would double the studio space available.

“I think that the future is bringing womxn together, allowing them to use their voices and to discuss ideas, and to find a way forward,” Adams says. “Because womxn are really, honestly the backbone of society.”

Creature Feature: Limp Bizkit will be the best WFH partner