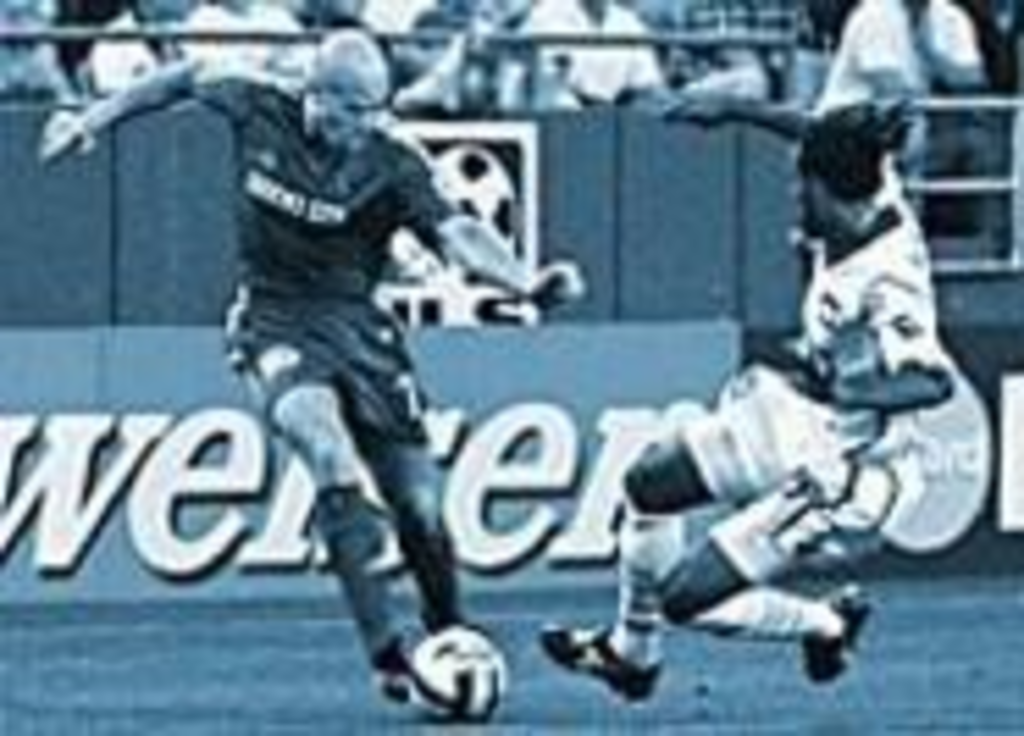 Attention Kansas City sports fans: There’s a new professional sport in town, called outdoor soccer. The sport, which is rumored to have been available for the four previous years, started out with a small bang and ended with a whimper, thanks to a disastrous 1999 Wizards season. With injuries, a string of losses, and general turmoil, wins and fans were as rare as a Bobby Knight apology.

That’s all changed. What’s the difference? According to Wizards announcer Sean Wheelock, the formula started with the addition of new players who fit in with new head coach Bob Gansler’s style of play. Wheelock mentions other changes, such as increased team speed, more balance to take the load off Preki, better training, and better team chemistry. And of course there’s goalkeeper Tony Meola, who has surrounded the KC goal with a Star Trek-like protective shield.

Key to the Wizards rebound is the duo of Miklos Molnar and Chris Henderson. Molnar, April MLS player of the month, is new to the team and leads the Wizards with seven goals as of this writing. A native of Denmark and known as the Danish Dynamite, Molnar comes to the team after two years on the Seville, Spain, squad where he scored 20 goals in 40 games.

Second in team scoring is Henderson, who survived last year’s forgettable season with the Wizards after four seasons at Colorado. Henderson is crossing paths with Gansler for the second time; at 19, the player was the youngest on the Gansler-coached 1990 U.S. World Cup team.

But that’s not the only connection Henderson has with others on this team, which could be called the “Kansas City Karma.” The young blond from California also spent the 1995 season in Europe playing with — guess who? — Molnar! And it’s no accident they are reunited. “We were good friends and talked about playing together again,” says Molnar after scoring yet another goal in a 2-0 win over the San Jose Earthquakes. Henderson credits the winning atmosphere brought by Gansler for the change.

“We’ve really got a good feel,” says Henderson. “There’s a good chemistry on this team. Everybody’s moving and doing the right thing, and we expect to get better.”

The combination of Molnar, Henderson, and perennial all-star Preki combine to keep the ball on the opponent’s end of the field most of the time. But when the ball has happened to venture back to the Wizards’ end of the turf, Meola has been nothing short of incredible in front of the net.

To top it off, in an era of sports scoring inflation, with baseball home run counts going up as fast as gas prices, a score in soccer remains something of value. The excitement builds when the ball nears the goal, and it reaches a frenzied state when a scoring opportunity presents itself. Add that to a 9-0-2 record for the Wizards (as of May 20), plus a crowd of over 17,000 at the team’s last home appearance (the biggest in four years), and there’s no doubt that Major League Soccer is finally back in Kansas City.

To help get into the action, catch Meola on his radio show on KKGM 1250, Thursdays from 6 to 7 p.m., live from O’Dowd’s Little Dublin on the Country Club Plaza and hosted by the voice of the Wizards, Sean Wheelock.

Inside Pitches
Who knows what devils possess Bobby Knight? His inner demons went untamed until Indiana finally decided to lay down some limits. The delay is a huge gaffe, and the responsibility rests solely with the university, which should have imposed conditions on the coach 20 years ago. Knight’s fits and tirades are mostly directed at the defenseless. Referees, senior citizen secretaries, reporters, media relations staff, players, and assistant coaches are targets of choice — people not likely to strike back. In another show of weakness, Knight’s response to the conditions set by Indiana was delivered in writing, not in person. The carefully crafted response could almost be interpreted to read that Knight was sorry for the actions he took against his victims — even though they so richly deserved it. Now the question is: Will Indiana’s administrators have the guts to back up their words the first time Knight crosses the line?

Kudos to boxing promoter Tony Holden for proposing his “Preliminary Weight Amendment,” requiring boxers to be within 3 percent of their contracted weight seven and 10 days before a bout. But boxing needs to impose many more safety features, get rid of the corruption, change the way bouts are scheduled and promoted, and finally unify the myriad of belts and associations under one umbrella before I’ll return to the sport.

The Kansas City Sports Commission announces the honorees for its 28th annual Sports Commission Awards Banquet, to be held Tuesday, June 20, at the Kansas City Downtown Marriott-Muehlebach Tower. For more information about the event, which will feature such honorees as Jeff Montgomery and the Northwest Missouri State University football team, call 816-474-GOKC (4652) or log on to www.sportkc.org.

St. Louis Rams linebacker Mike Jones, a Kansas City native and star of the Super Bowl, once again is presenting three free athletic and academic youth camps, between June 21 and 24 at Manual Tech High School. Call the Michael Jones Foundation at 816-691-8794 or visit its Web site at www.mjfinc.org for details.

Finally, congrats to Park University volleyball coach Bertil Wamelink, who was recognized in the February/March 2000 issue of Coaching Volleyball magazine for his contributions to the sport.