With their Urban Café, Justin and Rashaun Clark bring positive vibes to a corner of Troost 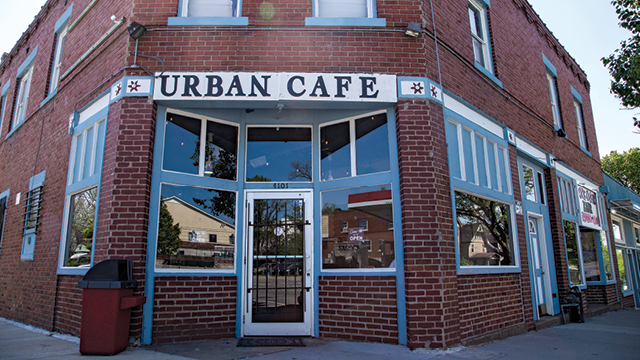 Back in 2009, the young couple was living in Chicago. Justin was staging for Michelin-star chefs like Phillip Foss and would go on to cook at the Fairmont Hotel. Rashaun was styling hair at a salon in Lincoln Park. Thinking about their future together, they made a vision board full of images reflecting their long-term professional goals. One of the overarching ideas was that they’d live together in an apartment above a storefront business they ran together.

“A lot of people do that in Chicago,” Rashaun says. “We were like, ‘That’s what we want. That would be ideal.’ We visualized it happening in Chicago.”

Eight years later, that part of their dream has been realized — though not precisely as they’d imagined. Their live-work space is in Kansas City, at 41st Street and Troost, rather than in Chicago. And instead of one business, it’s two. 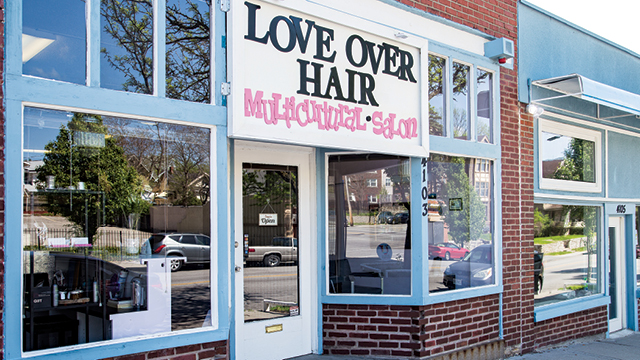 The Clarks’ shared vision — visualization? — started to poke through into reality almost two years ago. Having moved back to Kansas City, Rashaun (she grew up near 41st and Bellefontaine) opened a salon, Love Over Hair, in a space off 55th Street and Troost. She was looking for a new space to accommodate her expanding services — she now employs an aesthetician, a barber and another stylist — and her landlord, Jonathan Abnos, mentioned he’d just bought a building farther north along Troost. (The former tenant was Freaks on Troost, which closed after the owner was accused of installing an elaborate camera system to spy on a woman who lived in the building.) The Clarks scouted the space and loved it, particularly the fact that they could live upstairs with their three girls, ages 10, 5 and 4. 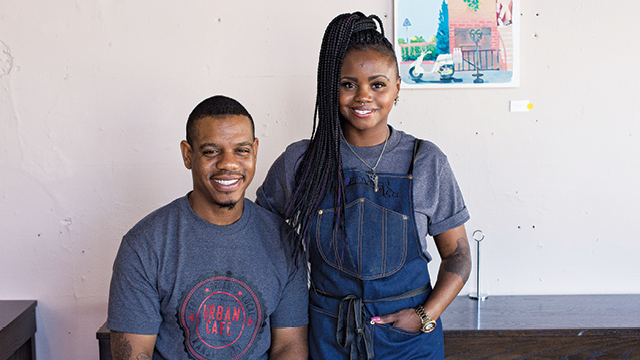 “It was amazing,” Rashaun says. “It was exactly what we had talked about years ago.”

In March 2016, Rashaun relocated Love Over Hair to 4103 Troost. And this past January, Justin opened a breakfast-and-lunch place next door, at 4101 Troost. It’s called Urban Café, and in all kinds of ways it’s unlike anything the neighborhood has seen in years. Most notably: You can get real food at Urban Café. Menu items include vegan chickpea tacos, a sweet-potato parfait and several kinds of smoothies.

“We’re trying to do healthy food that tastes good,” Justin tells me. He’s seated beside Rashaun at a table in the middle of their eatery, both of them in matching Urban Cafe T-shirts. “And we’re trying to create connection with this community. A lot of our vegetables are grown in the Manheim Community Garden, which is just a few blocks away.”

Justin says he wasn’t really planning to open his own spot. Since moving to Kansas City, he’d worked as chef de cuisine at the Westin, and then as a caterer for Truman Medical Center.

“It was cooking for CEOs and doctors at Truman,” he says. “Lunches for office meetings and things like that. It did allow me to experiment with some healthy alternatives, though, like cooking with barley or couscous. Not using a lot of oil. Some of those ideas, I think, led to what I’m doing here.”

He quit Truman Med to take care of his mother, who had developed colon cancer. She’s better now, and Justin says she attributes her recovery in part to the vegan diet she adopted. (She now makes her own kale chips, which are for sale at Urban Café.) The experience got Justin thinking about opening a place where someone like his mother — or Rashaun, who’s vegetarian — could eat. 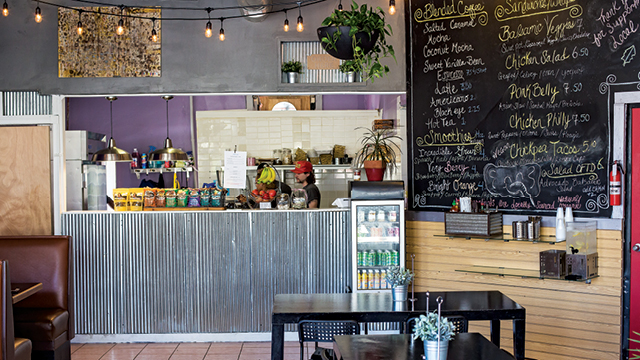 “There’s nothing else healthy around here,” he says. “Maybe you can get something kind of healthy at one of the Jamaican places. But I felt like there was a real need around here for healthy food. There’s a real need in this neighborhood for more than food, to be honest.”

Spend an afternoon pulling on doors along this midtown stretch of Troost, and it’s hard to disagree. Not a lot of those doors tug open. New businesses are rare. Most of the economic activity is auto-related — buy-here pay-here lots, tire shops, car washes — or the usual inner-city mix of fast-food chains, dollar stores and predatory lenders. Justin says it wasn’t until he looked at the neighborhood with fresh eyes that he began to see potential.

“Everybody has these feelings they bring to the idea of Troost,” he says. “But pretty soon after moving in over here, you notice it’s a pretty multicultural place. I’ve found it inspiring that we see all types of people coming into the café.”

“I think Troost has changed tremendously since I grew up here,” Rashaun says. “I think there is an energy around here that people are really beginning to tap into.” She cites a couple of neighbors — Olivia’s, a braiding shop next door to Love Over Hair, and Heart of the Dove, a holistic wellness center at 43rd and Troost — as allies of sorts, small businesses adding positivity to Troost.

It’s 3:30 p.m. — closing time for Urban Café, and appointment time for Rashaun at the salon. A photographer will be coming by the next day to shoot the couple for this story. Justin rubs his head and laments his need for a haircut.