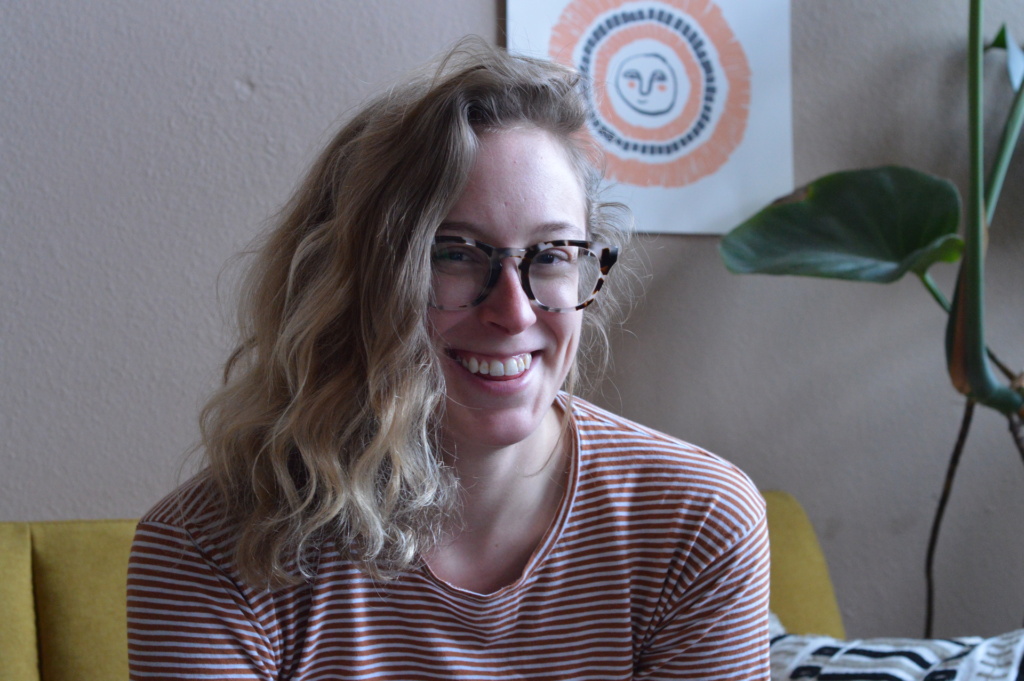 Samantha Slupski started writing poetry sometime around sixth grade, and she even posted some of it on a Tumblr account as a freshman in high school. But she hadn’t really considered sharing her work out loud until December 2015, when a friend suggested she stop by Poetic Underground’s weekly open mic at Uptown Arts Bar. She was immediately drawn to the warmth of the place — the stage encased by white, twinkly lights, a lone microphone at the center, a velvet curtain providing a gentle barrier between the poets in the back of the venue and the patrons at the bar up front. How the audience members would encouragingly snap and clap and stomp their feet when moved by the performance.

“I truly didn’t even really know an open mic existed that could hold the kids of poems that I was writing,” Slupski says. “[Poetic Underground] was this place that was really welcoming for me, where I could talk about all the things I was experiencing. It was really the first place where I could talk about my mental illness in the open and not feel super judged or stigmatized or anything like that.”

Three years later, Slupski is the executive director of Poetic Underground, having taken over duties from Jeanette Powers, who previously held the role. The organization holds writing workshops, open mics every Wednesday, and the monthly Kansas City Poetry Slam. Though the idea of a poetry slam wasn’t appealing to Slupski initially, she’s now a regular participant.

“I was like, ‘What is competing with poetry? I don’t get it,’” Slupski explains. “Then I …  saw how that was not only a fun way to experience poetry, but it was also a way to challenge yourself and challenge the community.”

In 2017, Slupski became Slam Master of Kansas City Poetry Slam and attended the National Poetry Slam for the first time in Denver, CO. There, in conversation with other poets, she noticed a lack of awareness of Kansas City’s active poetry scene and saw an opportunity to blend the two worlds.

“I was like, I think that Kansas City needs big names to come here, so not only will people see, ‘Oh there is something really growing here, there is extreme talent in this city’ — but also so that local poets here can have their horizons broadened,” she says. “Just to hear different stories and hear from different people from different walks of life.”

So she pitched a new idea, which she called the Middle of the Mic workshop series, in a grant proposal to ArtsKC. The series kicked off with poets Lino Anunciacion and Desiree Dallagiacomo and now occurs the second Wednesday each month on a donation basis. It gives local poets the chance to learn from touring poets.

“The teaching was really important for me, because one of the things that I thought Kansas City lacked was workshops and the opportunity for people to sit down and get feedback and have prompts to just write in an intimate setting,” Slupski says. “Slams and open mics are great because you can get immediate, ‘Oh my gosh that was so good,’ type of feedback. But you don’t really get more in-depth, intimate feedback if you’re not in a workshop setting.”

And Slupski continues to share her work. Her first book of poetry, What Sits Between My Veins, was published by EMP Books in 2017. Though Slupski finds it difficult to revisit, she describes it as a springboard for her work now. The collection covered topics from heartbreak to familial trauma. It was also the first time she acknowledged her body “as a thing that exists instead of just feeling like a weird, meat robot.” She says writing those pieces allowed her to write more in-depth today about topics such as femininity and patriarchy, as well as diving deeper into experiences with her family. She also found room to incorporate joy and happiness into her poems.

“A way that my work transformed, over at least the past year anyway, was incorporating joy,” Slupski says. “Because that was not something I knew how to do…For so long, it was just a coping mechanism and I had to squash the trope within myself of, ‘You can only make good art when you’re sad.’ I think that’s something that, universally, writers, poets, artists are trying to be like, ‘That’s not true! Quit trying to romanticize tragedy!’ Yes, it can create beautiful art, but that’s not all; you can create good art in any state.”

Slupski recently celebrated her third anniversary of reading poetry at Poetic Underground at Uptown Arts Bar, and the open mic will celebrate its fifth birthday with a slam this Wednesday, February 6.

“Being in this community gave me the freedom to be as experimental or as conforming as I wanted to be,” Slupski says. “I could really just go in-between whatever I wanted to. I could sit down and try to write a ‘slam poem’ or I could sit down and just write words upside down and call it a poem. I saw so many different formats of how poems could be written and that was huge for me. In my head I was just like, ‘There’s only one way poems can be written or there are only these forms that we’re taught in school and in that there’s not a lot of ways to veer off from it.’ And I think if I wouldn’t have entered into that community I would’ve just been stuck in a box.”