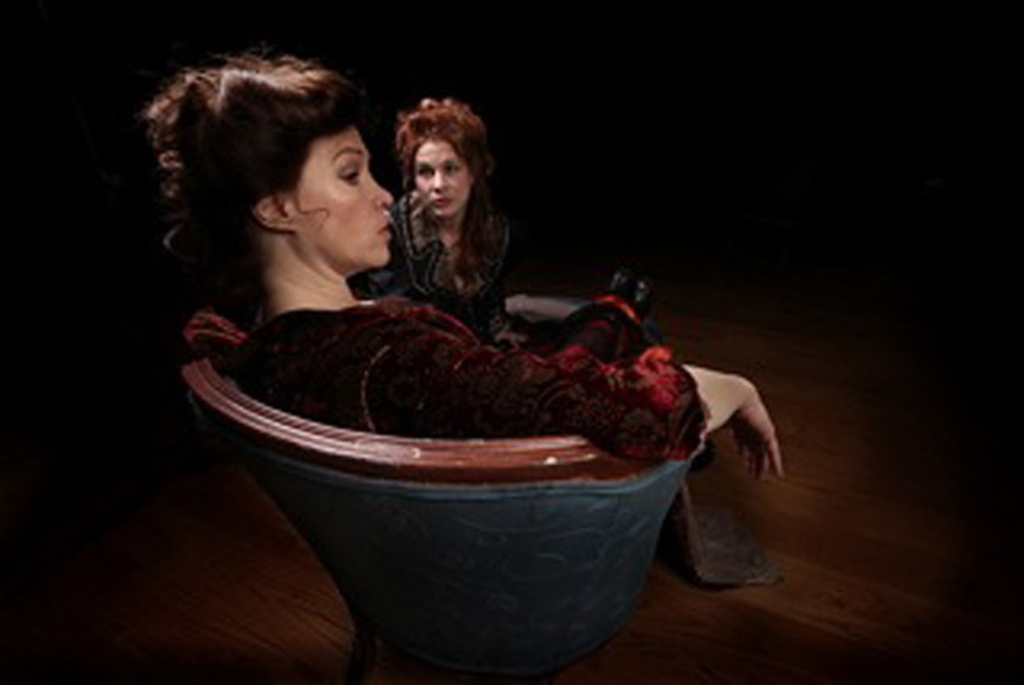 There’s a wit to staging David Mamet’s Boston Marriage in the stateliest drawing room at the Webster House, an 1885 schoolhouse at 16th Street and Wyandotte that hosts high-end antiques, an interior-design firm and a restaurant ($3 truffle fries at happy hour!). Mamet’s Gilded Age women-in-love comedy, an amusing go at Edith Wharton and Oscar Wilde, feels at home here among the chandeliers and bric-a-brac. Like the antiques that accessorize it, Boston Marriage is a well-wrought curio, more a conversation piece than true art.

Staged by Kansas City Actors Theatre as a sort of all-female counterweight to last summer’s shouting-boys epic Glengarry Glen Ross, Boston Marriage at first resembles no other Mamet show. It concerns “women of fashion,” affairs of the heart, and the practicalities of lesbian life at the turn of the last century. (The play’s title comes from a century-old slang term for women who cohabit.) Leads Anna (Cheryl Weaver) and Claire (Cinnamon Schultz) understand that love is a business and that taking a lover is as much a financial negotiation as it is romance. Anna, the older of the two women, has recently become a wealthy man’s mistress. Claire, just old enough to desire a younger woman, may or may not love Anna.

Anna’s lover doles out a stipend sizable enough to keep both women “in comfort.” Still, the rules of this central relationship seem hazy even to its participants. The audience isn’t alone in its surprise when Claire, weary but still hungry, requests Anna’s assistance in the seduction of a much younger girl.

Mamet’s familiar concerns soon take over: power struggles rooted in language itself, the ill-advised measures to which fate can drive us, and scenes of desperate people lashing out at those worse off. Both women heap scorn on Anna’s weepy, terrified maid, Catherine (Rachel May Roberts, with worried eyes and a wonderfully comic pout). Just off the boat from Scotland, the poor dear can’t keep up with Anna and Claire’s ornamented dialogue.

“What is speech?” Anna asks, early on.

Claire responds, “I had often thought it is the chirping of the birds, minus their laudable disinterestedness.”

Weaver and Schultz fire through these lines, always making clear that their characters enjoy coming up with such pearls. Sometimes, Weaver’s Anna struggles to find the next perfect word, and Weaver makes sad comedy of this. As the complications pile up and Claire’s confidence frays, Schultz and director Melinda McCrary let her crack just a little — a touch of the human underneath all this linguistic extravagance. When the words get to be too much, there’s plenty to look at in the exquisite vintage gowns of costume designer Jon Fulton-Adams, and all the splendor of Webster House.

Two other things. Mamet being Mamet, the play has raw jokes about muffs and pies. I welcomed these. Also, the (now sold-out) show starts at 7 p.m., which I hope is no trend. Historians warn us that no civilization has long survived bumping the curtain that close to dinner.

Like the Webster House folks, J. Kent Barnhart and his Quality Hill Playhouse compatriots have made a life out of preserving the past. Barnhart has been staging cabaret-style tributes to the best of old Broadway and Tin Pan Alley for 15 years. The latest, Rodgers & Hart & Hammerstein, bursts with pleasures. In the first half, singers Charles Fugate, Alison Sneegass Borberg and the illustrious Melinda MacDonald take turns treasuring the songs of composer Richard Rodgers and lyricist Oscar Hammerstein, from the shows that define the musical-theater canon: South Pacific, The Sound of Music, Oklahoma!

After intermission, Barnhart (on piano) and his bass-and-drums combo swing through the livelier, Depression-era numbers that Rodgers wrote with his first partner, the great Lorenz Hart. The mood relaxes; the songs grow less familiar; and those reverent singers now spree through blues changes, ribald lyrics and Hart’s indecorous rhymes (my favorite: fratricide/patricide/mattress side). Barnhart builds to a memorable quartet of heartbreakers that spotlights each singer at his or her best — including himself on the tender, out-of-kilter “Little Girl Blue.” Even “You’ll Never Walk Alone,” the de rigueur closer, feels fresh.