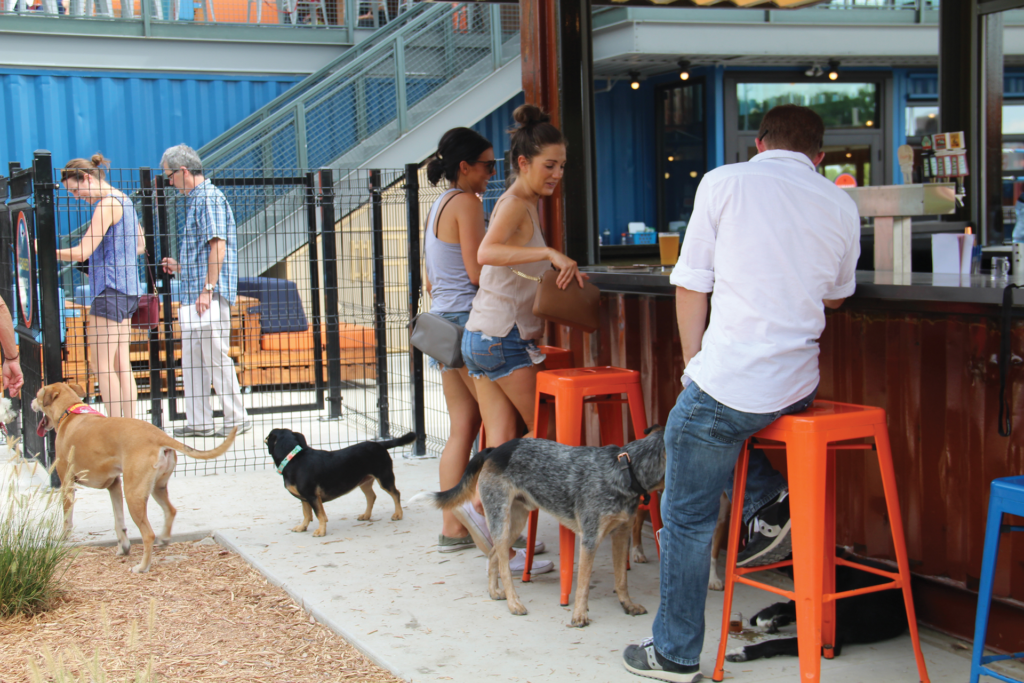 The parcel of land that is now home to one of the happiest places in Kansas City was once so overgrown and rife with waste and trash that it was civically classified as “found,” which is another way of saying nobody had even considered developing it for anything.

But Dave Hensley and Leib Dodell saw potential. Yes, it was located underneath the Heart of America Bridge. But it was also riverfront property, adjacent to Berkley Riverfront Park. It seemed like an ideal spot for the concept they’d been trying to get off the ground: a dog park where owners could hang out, eat, and drink.

As of mid-August, that concept is a reality: Bar K is open for business. It’s many things in one: a large outdoor dog park (complete with a dog splash pool and dog climbing wall, among other play features); a land reclamation project; a restaurant; a coffee shop and bar; a place for outdoor games; a training and grooming facility; and a dog adoption center.

Experiencing Bar K, it’s a wonder nothing like it has ever been tried in KC before. But getting here took a while. Hensley and Dodell forged a close working relationship with Port KC, which saw potential in the concept early on and ultimately negotiated a long-term ground lease on their behalf with the city of Kansas City. In the meantime, they opened the Bar K “lab” out of a warehouse in the West Bottoms. A visit to this temporary indoor facility — The Pitch wrote about it in 2017 — was a dose of pure fun. Dogs ran up and down custom-made ramps and played in a baby pool full of tennis balls while their owners drank beer and mingled nearby. 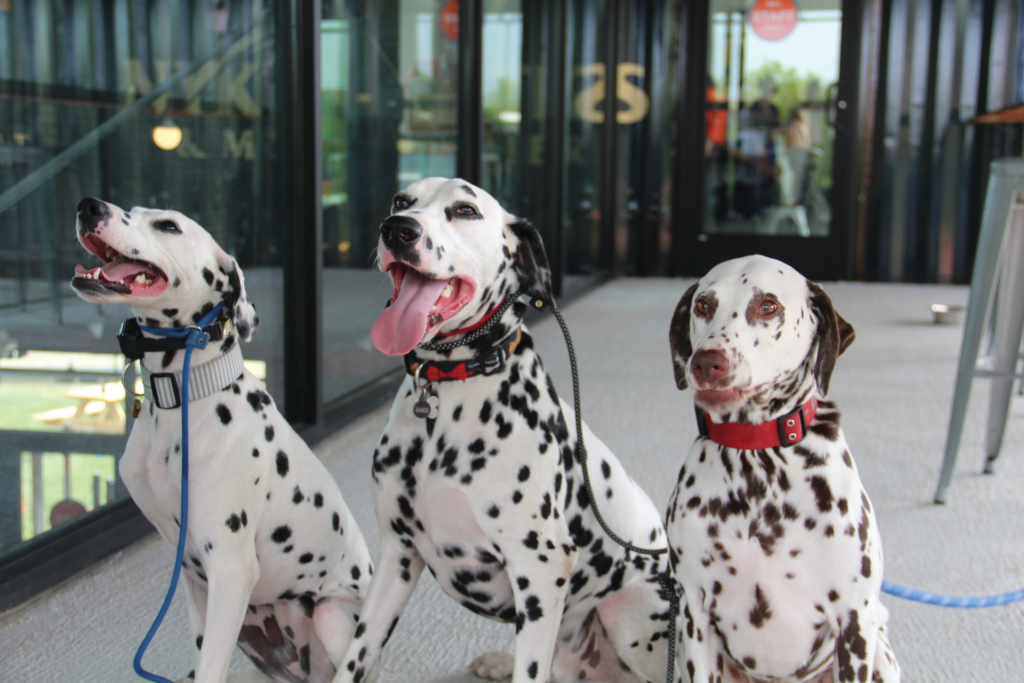 “I think [at the lab] we learned that people really needed a space to hang out with their dogs where their dogs are treated like family,” says Hensley. “So many times, if you go out and have a drink or go out to eat, your dog gets left at home. That’s not how you would treat a family member.”

Hensley and Dodell worked with Clockwork Architects on the design of the new facility, which utilizes reclaimed shipping containers in a unique configuration that provides restaurant, balcony, patio space — even a beer garden — that all feed out into the sprawling dog park. Once construction began about a year and a half ago, a number of other partnerships emerged, including with J. Rieger and Company, Messenger Coffee, and Purina (which bases some of its operations in the KC area).

One of the crucial elements of Bar K’s model lies in its staffing. Specially trained workers are on hand to monitor dog behavior and clean up after the pups. Staff watch out for problems between dogs, a constant source of anxiety and frustration for many people who visit traditional dog parks.

“We have our own training, and we’ve hired people who have experience with dog behavior,” Hensley explains. “We learned [while running the lab] what warning signs look like and how to make sure dogs are having fun.” He adds that once customers can see that their dogs are having fun, their owners relax, which in turn further relaxes the dogs. 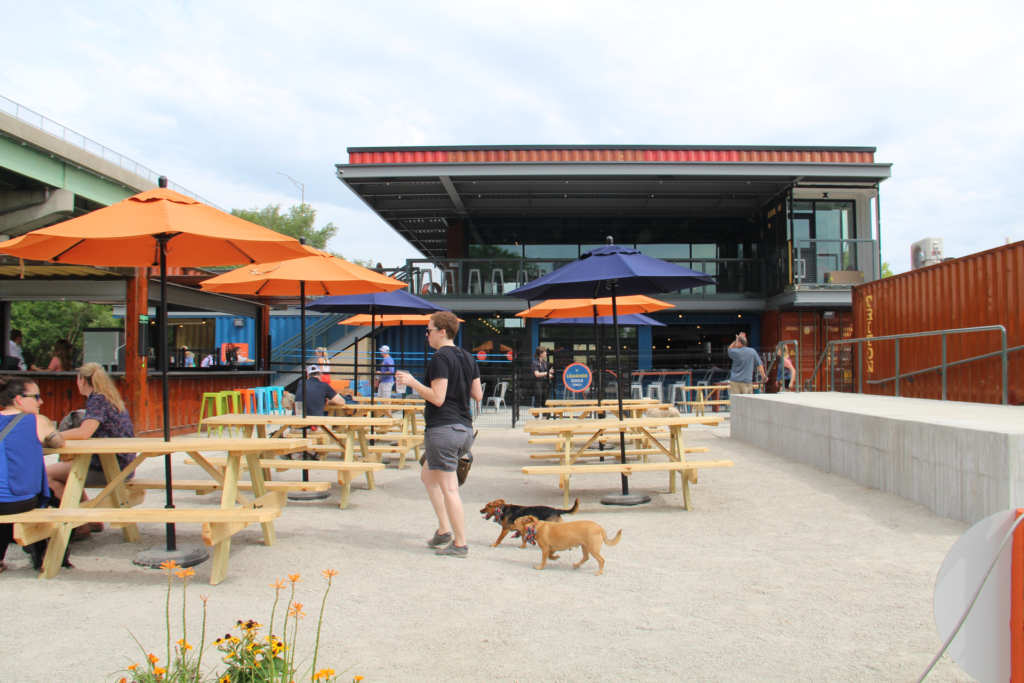 Bar K also, of course, has plenty to offer owners in the way of relaxation. Two full bars — one centered inside of the restaurant and one in the beer garden — serve custom cocktails from a menu designed by Ryan Maybee (Manifesto, J. Rieger and Company). Choose between the “Purebreds” (classic cocktails) and “Hair of the Dog,” which includes coffee cocktails, Bloody Marys, and mimosas.

Hensley describes the restaurant’s menu (developed by chef Joe Shirley of Überdine) as healthy-casual, with a focus on responsibly sourced ingredients. Breakfast items, wraps, salads, bowls and sandwiches typify the offerings. There are also some local collaborations, for both pet and owner: Meshuggah bagels and ice cream from Betty Rae’s for the humans, Purina dog meals for the canines. (Dogs are permitted on-leash on the deck and in the beer garden, though they are not allowed inside near the kitchen.) 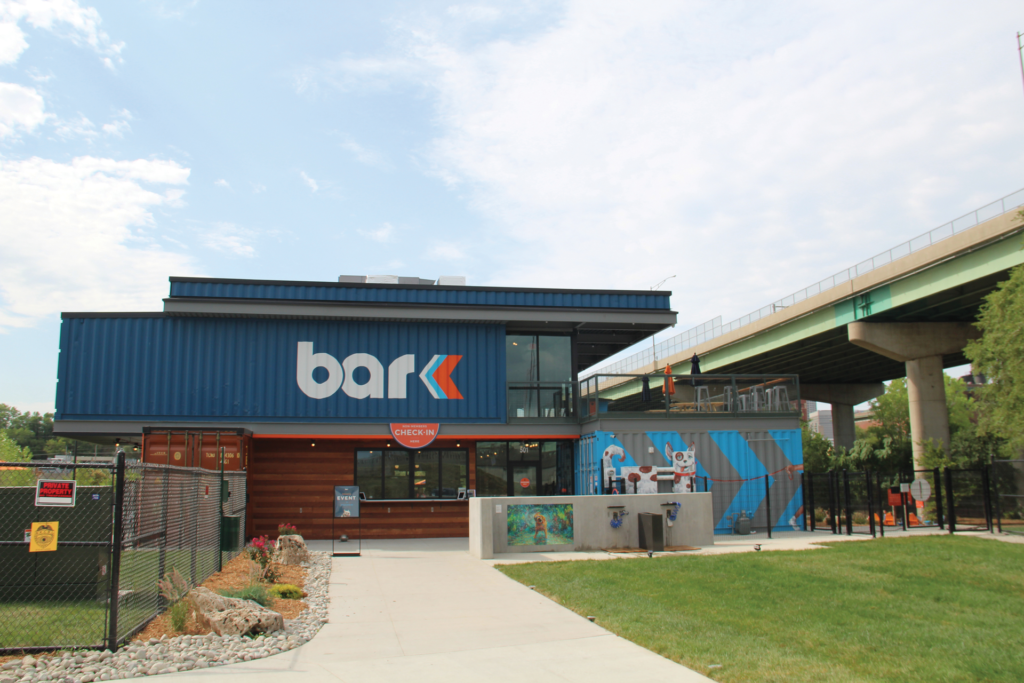 Hensley and Dodell eventually want to bring Bar K to other cities, but for now they’re incredibly satisfied to see their vision finally come to life.

“Our goal was to create a joyous space for people to hang out with their dogs,” Hensley says. By that metric, at least, Bar K is already a full-blown success.