With 715, chef Michael Beard finds a winning number in Lawrence 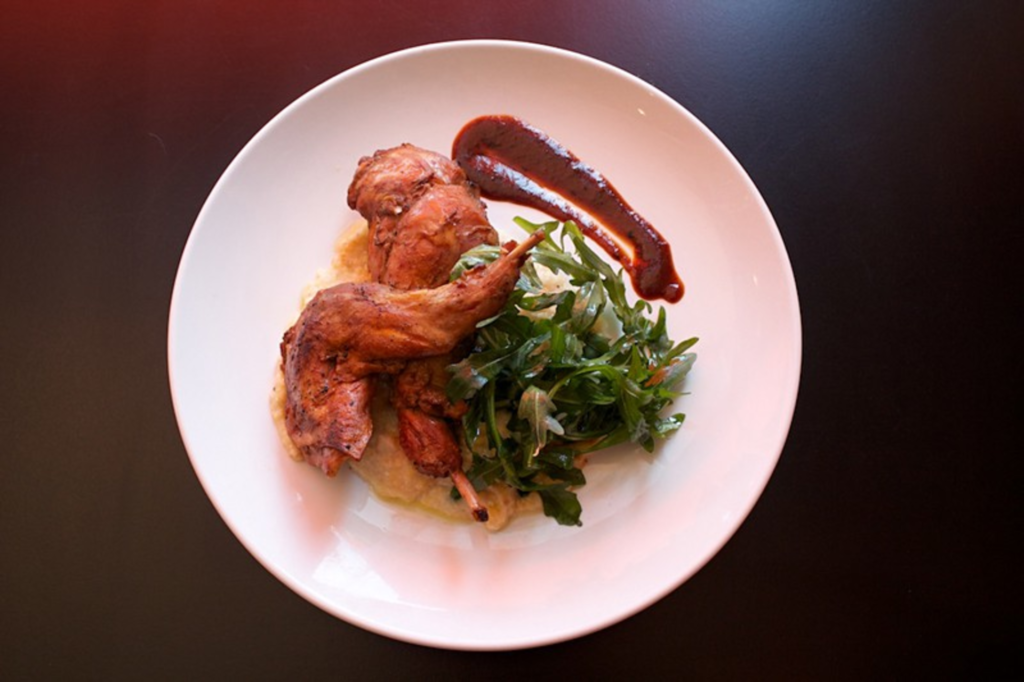 In Kansas City, restaurants with numbers as names haven’t fared well. The more recent casualties include 1924 Main, Seven, and One80. But a number does tend to stick in one’s mind, especially if it serves a dual purpose: representing both the name of the restaurant and the address.

Case in point: Once you’ve committed the number 715 to memory, you’re not likely to forget the location of the Lawrence restaurant where chef Michael Beard and his business partner, Matt Hyde, have opened a sleek bistro serving contemporary American and Italian dishes.

The building at 715 Massachusetts was, most recently, a jewelry store. Long before that, it hosted a variety of businesses, including the Round Corner Drug Store — a name still embedded in neat square tiles at the building’s entrance.

There’s a lot to say about 715, almost all of it positive. It’s a vibrant, sophisticated and very grown-up restaurant in the heart of a college town. Is eating here worth the drive from Kansas City? Absolutely, particularly for its leisurely Sunday brunch, which combines traditional offerings — quiche, buttermilk waffles, steak, eggs, potatoes — with surprises. I can’t think of another restaurant serving grilled link sausages over slow-simmered cannellini beans with a poached egg and sweet, fluffy mascarpone.

I’ve never been a fan of beans before noon (especially if there’s a long drive involved), but that dish sounded good. Not as good as the smoked trout Benedict that my friend Carol Ann ordered the same morning: two exquisite cakes of crispy fried chickpea batter layered with house-smoked rainbow trout, poached eggs and a lemony hollandaise sauce, and dotted with tart capers and chopped red onion. It was as pretty as it was delicious.

Four of us had driven to Lawrence from midtown on a foggy Sunday morning. I neglected to drink a mug of java first, and my head was pounding long before Carol Ann missed every Lawrence exit from Interstate 70. We arrived at 715 in time to snag a table near the exhibition kitchen, and the coffee was robust and comforting.

Bob, who believes in simplicity before noon, ordered eggs and a thick slice of grilled Creekstone beef — a little on the chewy side, alas — with excellent fried potatoes. I tossed any concern about cholesterol to the wind and luxuriated in the three-meat special: a slab of fatty, fragrant roasted porchetta with thick slices of Beard’s house-cured bacon, a chubby link sausage and two fried eggs. The table shared a grilled baguette, from WheatFields Bakery, and I slathered my portion with locally produced Iwig butter and apricot preserves. For an hour, I was a 140-pound college freshman again.

Martha first considered the pizza made with a cured dry salami that’s becoming very trendy in the artisan pizza community. I think she just liked rolling that word, soppressata, off her tongue. She finally settled on a bulky sandwich made with house-cured pastrami (superb) and aromatic rye bread.

Keeping company with the soppressata, the other meat options here are sausages; house-cured ham, pastrami and bacon; and house-butchered pork steak. I wondered if a better name for this restaurant might be Sweeney Todd’s. Beard, a tall and lanky man, clearly knows his way around a carving knife and a meat grinder.

Even some of the meatless items conveyed a certain fleshiness. One featured soup I sampled, a butternut-squash and ginger puree, needed thinning if not butchering. It was flavorful and visually striking, but the consistency suggested a thick Indian pudding rather than a sexy potage.

Oklahoma-born Beard is a serious talent, no question, and his imagination takes center stage on the dinner menu. Among his crea­tions was a chestnut-filled ravioli in a simple sauce of fresh butter and pecorino cheese, and a roasted chicken breast served with braised collard greens stewed with Beard’s own bacon and chopped shallots. Another ravioli dish burst with caramelized onion and rosemary, sprinkled with pretty little bay scallops. They were a shade chewier than I thought they should be, but the contrast of supple shellfish and soft, sweet onion was fine.

Beard’s way with simple country dishes is what really dazzles at 715. The rabbit ravioli were pasta pillows stuffed with parsnips and goat cheese and slathered in herbed olive oil and a delectable confit of braised hare, shallots and thyme. It had been years since my last dish of spaghetti and meatballs, so I was sorely tempted by our server’s description of Beard’s long-­simmered pork balls. I went with the starter version: five succulent meaty spheres the size of golf balls, made with locally raised lamb or pork in a gorgeously light, fresh-tasting marinara.

In the deep-fried Midwest, Beard takes the art of frying to a new level. A salad of fresh, spicy arugula is tossed in a roasted-garlic vinaigrette and heaped with a mound of crispy fried root vegetables — delicate, crunchy splinters of parsnips, turnips and carrots. If it wasn’t as healthy as a tossed green salad, it was much more satisfying.

The fried chicken livers at 715 are, hands down, the most wonderful I’ve tasted anywhere. Moist, meaty and luscious, the livers were battered in a modest concoction of flour and sparkling water and flash fried, arriving at the table as light as tempura puffs. Beard served the livers with a zesty chile aioli, but this delicacy didn’t require the added note of a spicy dipping sauce.

The night I dined here, 715’s dessert list was compromised — at least as far as the staff was concerned — by the lack of gelato. (“We’re still waiting for our new machine,” my server said mournfully.) Instead, there was a divinely rich but airy Belgian chocolate mousse. The crème brûlée was a light, smooth white-­chocolate version, the cool custard tucked under a firm, crisp, amber crust of sugar, ringing with just a hint of fresh lavender and lemon. Closer to perfection was a delicately flaky warm apple tart flavored with almond and perfumed with thyme.

The narrow dining room looked completely different at night, illuminated mainly by twinkling votives and pretty hanging fixtures that created moody circles in the dark. There were more people laughing and drinking in the half of the room dominated by the bar than in the space set aside for serious diners. Accordingly, there’s a completely different happy-hour menu of stylish finger foods, served only on the bar side each day from 3 to 6 p.m.

My friends would like to drive back to Lawrence some late afternoon and eat dinner just from Beard’s collection of small plates. It would involve some juggling of schedules, but I think we could get there in time to enjoy chicken-liver crostini or mini soppressata pizzas. It’s all about making the numbers work. That seems to be a game that Beard and Hyde are doing perfectly well at 715.