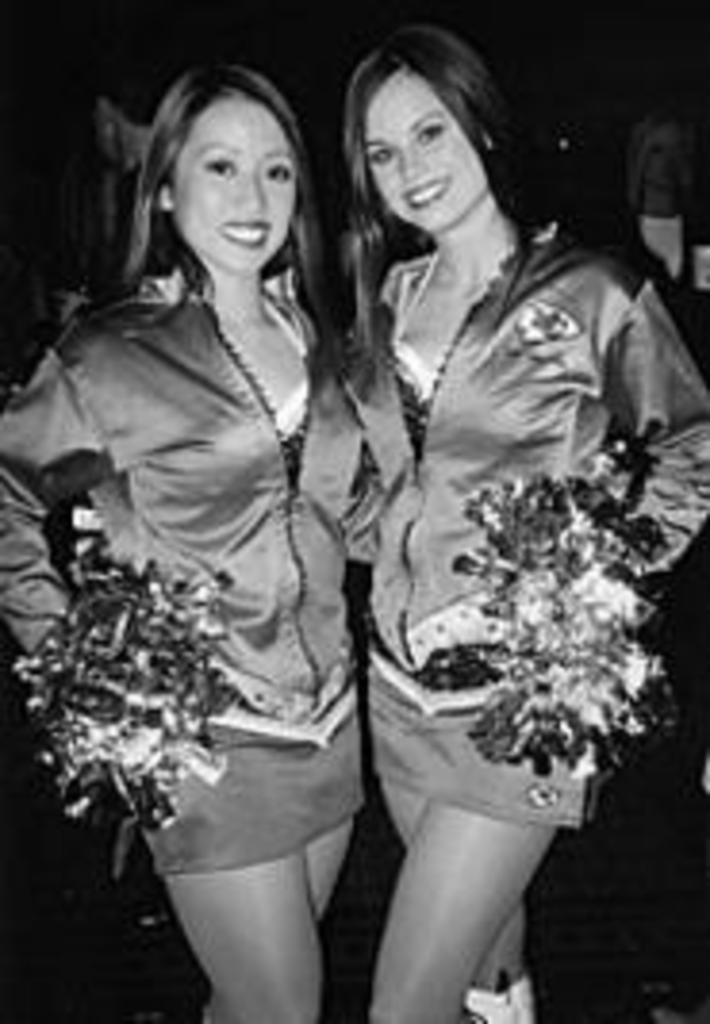 After declaring our luv for office parties and wingmen in our past two columns, who knew the two would collide in a Hyatt Regency Crown Center ballroom?

The setting: the December 21 World’s Largest Office Party, a bafflingly named event that involved similar shindigs in other cities (yet on different days) for charity. Not one to pass up an opportunity to theme-dress, the Night Ranger decided to rock the slutty secretary look by donning fishnet hose, fuck-me pointy black stilettos, a miniskirt, a tight sweater and librarian glasses. We teetered over to the event with some trepidation, though, partly because it was sponsored by KUDL 98.1 and hanging out with the soft-rock crowd did not sound appealing. As we were heading over, we got a call from Research Assistant Kate, who had arrived early.

“I wanted to give you a heads-up,” she said. “It’s really lame.” We hurried to meet her outside the ballroom, whereupon she gave her full scouting report. “It’s a cheesy crowd. I know, I’m a snob. But I just felt like all these old guys were looking me up and down, and it was giving me the creeps.” All the better for antics, we thought, so after paying the $5 cover and getting liquored up, we went in.

Indeed, it was a cheesoidal nirvana inside. The Chiefs cheerleaders, in their red microscopic sateen ass coverings and white go-go boots, were handing out squad photos. We shudder to think that some autographing might have been going on, too. “Celebrity” bartenders (assorted TV and radio personalities and sports-related types, such as the Tony DiPardo band and the Comets) served the big-haired, the skanktastically dressed and, yes, the old guys pathetically trying to pick up.

But. We had a pretty good time. After two 7 and 7s and a beer and conversations with a lot of receptively friendly people, you would, too.

We chatted up a couple of Chiefs cheerleaders. Huong, 23, and Jessica, also 23, were rookies who performed at every home game. They gave their spiel about how they’re more than just cheerleaders. They are, they said, well-rounded folk (we assume they meant personalitywise) who have to be savvy enough to communicate in nonass-shaking ways, for their duties include many public speaking events.

Yeah, yeah. What we really wanted to know was: Have they gotten any sordid pickup lines yet? Or, better yet, been groped?

Both gave the professional laugh and responded diplomatically and evasively.

Jessica: “We just got here.”

Damn it. However, Kara, 37, Kara, 30, and Nikki, 28 — Granfalloon staffers and gregarious objects of lust — were subjected to another sort of interrogation.

“The cops outside [the ballroom] asked us if we were virgins!” Nikki said. “They said they had a friendly bet going.” Wow. If you’re going to go for the blatantly and crassly unimaginative line, why don’t you just brag about the size of your nightstick or make kinky handcuff jokes? (Just kidding! Don’t Taser us when you pull us over!)

As we wandered around some more, we also made eye contact with an adorable guy who was standing alone, so naturally, we went over to talk.

“I was at my office party before this, so I’m a little looped,” said Dave, 34, a half-Asian, half-white guy with a shaved head who kind of resembled Cris Judd (J. Lo husband No. 2). Just then, his man tribe joined him. “That’s the guy you should interview,” he said, pointing out his buddy in a polo shirt embroidered with a corporate logo. “He’s the quintessential singles man. I’m his official wingman.”

“There aren’t many I don’t want to hook up with,” he replied with a cheeky grin. “Let’s turn the tables on you. Isn’t this just a great way for you to meet men? ‘Hey, I’m with the Pitch. Can I interview you?'”

“Age doesn’t matter. It’s all about performance,” he replied before turning to ogle a woman standing nearby whose legs were encased in argyle tights. After he was done leering, he said, “How old are you, Jen Chen?”

“Does that matter?” the NR parried back. “Old enough.”

“Oooh, she called me out on that!” Tom said, giving Dave the fist-bump.

We then probed Dave about what made him a good wingman.

“Part of the reason is because I’m fearless,” he told us, adding that he’s been dating someone for a long time, which is why he has no inhibitions when chatting up chicks in the interest of wingmanly duties. He also gave us some dirt on Tom.

“I’ve been on at least a dozen road trips with him, and he’s slept alone maybe three times,” Dave informed us. “He’s got about a .750 batting average.”

“What’s his appeal?” we asked.

“He’s probably not the most physically attractive man to catch your eye, but women love him after they talk to him. If you talked to him for 10 minutes, you’d see. He listens to them. But he’s one of those guys who’s unlucky in love. He loves his family. He loves his friends. But relationships don’t work out for him.”

“Is that your wingman line? ‘He loves puppies and babies’?” we suspiciously queried.

We also learned that it’s God’s honest truth that when you’re kicked out of a Michael McDonald concert and are brave enough to share that story with a newspaper, you deserve a little slack for ordering white zinfandel. That’s how we met Steve, 35. We were taking a picture of KMBC Channel 9’s Dan Weinbaum in action as a bartender (in the interest of full disclosure, we shamelessly flirted with Dan at a Kansas City Press Club happy hour a couple of weeks ago), and Steve wanted in. On the picture, that is.

“Wait! Not while I’m holding a white zin!” he facetiously said. “Don’t tell anyone. It’s for someone who gave me a ride home from a concert. I got kicked out, so if she wants a white zin, she gets it.”

“Uh, why were you kicked out?” we asked.

“Use your imagination,” he replied. Was it for not maintaining a full mane of hair? Or not knowing all the words to “Takin’ It to the Streets”? Tragic.

Since our work was now done, we tracked down Tom to see if he’d had any success. Sadly, it seemed like he and Dave were having an off night. Fret not, Tom — we’ll be your wingman anytime. After we buy you Michael McDonald’s Greatest Hits to inspire you, that is.