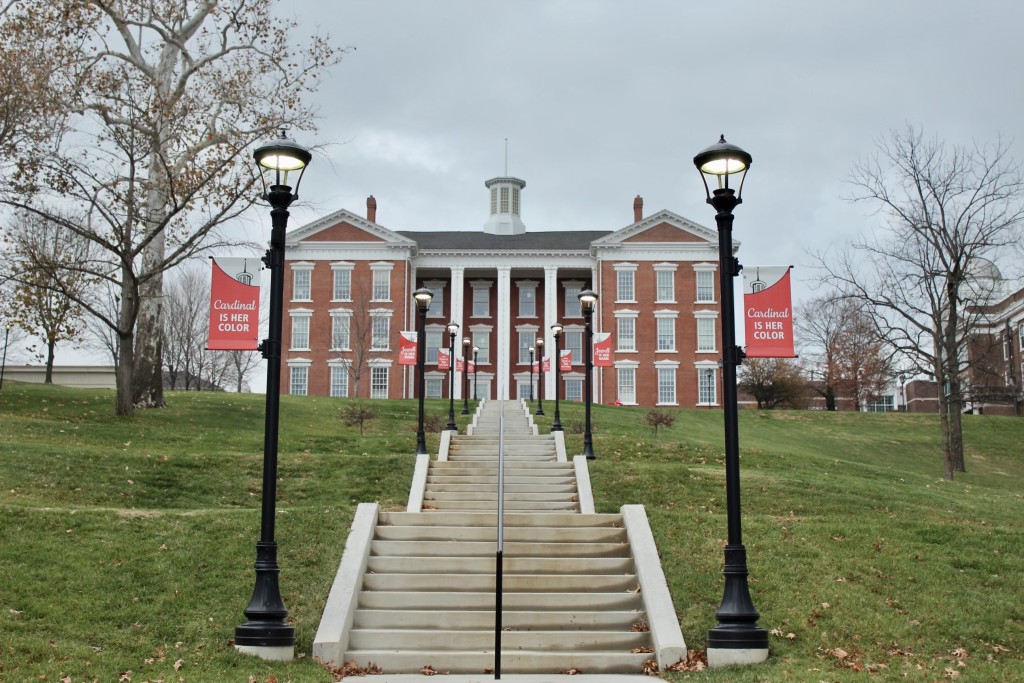 One entrance to William Jewell College prominently features Jewell Hall at the top of the stairs leading up the hill. SMJP members discovered that the building was constructed using enslaved labor. // Photo by Christina Kirk

Nearly two years ago, students at William Jewell College contacted Dr. Christopher Wilkins, associate professor of history and chair of the department at the school, with questions about the college’s history of slavery. Wilkins, whose ​​expertise is in the U.S. Civil War and Reconstruction, was also curious to do a thorough accounting of the school’s founding years.

Together, Wilkins, Jewell students, faculty, and alumni formed the Slavery, Memory, and Justice Project. Members of the new initiative looked through thousands of documents—court and census records, wills, and narratives written by enslaved people—covering every aspect of Jewell’s pro-slavery past.

Their findings directly contradict the three historical books that the college promotes as its official history.

“If my students and I accepted histories promoted by the college, we would have concluded that slavery had no influence on the founding. That was unlikely,” Wilkins said.

Some iteration of ‘slavery’ appears only five times in the college’s official histories.

One reference in Jewell’s histories is about Dr. Adiel Sherwood, whose father enslaved people and used the profits from their exploitation to help fund an endowment for William Jewell College. A departmental chair was named after him to celebrate the gift.

Another instance refers to the now-disbanded Beta Xi chapter of the Sigma Nu fraternity, which allegedly used their house as part of the Underground Railroad. This claim is improbable, and the SMJP has not found any evidence to verify it.

The remaining three appearances of ‘slavery’ claim that Dr. William Jewell, the primary founder of the college and its namesake, was a gentle slave-owner who freed all of the people he enslaved upon his death. Those claims are false.

Christian Santiago, a student researcher with the SMJP, found that Jewell did manumit most of the people he enslaved in his will, except for one woman named Ellen. Jewell stipulated that Ellen was to remain enslaved by his family until his grandson died or turned 21. Even after, any children she had would stay enslaved.

These preliminary findings prompted the SMJP to solidify their grassroots organization dedicated to publishing and learning from the college’s complete history. In a public lecture April 4 about the SMJP at William Jewell College, Wilkins said that the early college’s ties to slavery are just as important to publicize as the school’s origin as a beacon for education.

“Jewell’s founding as an institution of higher education is the central story. Promoting education is a noble endeavor and should be celebrated. But that positive version of Jewell’s history has been told many times, and it is incomplete,” said Wilkins. “The origin story of Jewell cannot be told without telling the uncompromising truth about slavery’s influence on the college’s history.”

A copy of Dr. William Jewell’s will, wherein he stipulates that Ellen, a woman he enslaved, should remain enslaved along with her children. // Courtesy of Boone County archives

In their research, the members of the SMJP discovered irrefutable evidence that the college was founded using profits from enslaved labor.

James T.V. Thompson, who enslaved 39 people in 1850 and was the largest slave-owner in Clay County, donated the land for the campus.

Thompson is not the only one. The SMJP found that 90% of Jewell’s founders, early trustees, and other major financial supporters collectively enslaved more than 1,000 people. Out of the college’s first seven presidents and chief administrators, five were slave-owners or lived in slave-owning households.

“That money enabled the founding of the college,” said Wilkins. “Without the forced labor of enslaved people, William Jewell College would not exist. The exploitation of enslaved people in earlier decades mattered to the founders’ wealth in later decades and influenced how much they could give to the college. It is the same drill with intergenerational wealth or poverty transferred today.”

The pro-slavery beliefs of those at the highest levels of the college were also reflected in the student population at the time. More than 70% of Jewell students were slave-owners or belonged to slave-owning households. 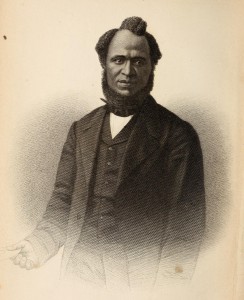 An engraving from “Summary of The Story of the Life of John Anderson, the Fugitive Slave,” a slave narrative written by Anderson. R.E. McDaniel, a prominent founder of William Jewell College, enslaved Anderson and was especially violent.

In his lecture, Wilkins stressed the need to center the stories of enslaved people when discussing the college’s founding.

One donor who gave a significant amount of money to the college was Michael Arthur, a wealthy merchant, banker, and slave trader. Most of his fortune came from exploiting enslaved people and selling human beings, including children, on the slave market.

Susan Reeves was enslaved by the Arthur family. They repeatedly beat her with an iron poker, but the abuse was more than physical. When Susan was a girl, Arthur sold her mother to New Orleans—one of the most violent cities for the enslaved. On her final night in Clay County, Susan’s mother was likely held in a ‘slave pen’ the Arthur family had on their farm. After Susan’s mother was taken away by a slave trader, her father hanged himself.

Violent dehumanization in horrific examples like this are the foundations by which William Jewell College’s founders built their wealth, and by extension, the school.

Of the more than 10 million people enslaved in the U.S. between 1619 and the end of the Civil War, only 200 book-length slave narratives were published. Last year, members of the SMJP discovered that one such text is connected to Jewell.

That narrative is the story of John Anderson, enslaved by R.E. McDaniel. He ranked in the top 1% of all Missouri slaveowners, as measured by the number of enslaved humans. Anderson’s narrative shows McDaniel as one of the most violent slave-owners in the region.

McDaniel bought Anderson, separating him from his wife and children. When Anderson arrived, he wrote, “I have never seen slaves in worse condition.” Those McDaniel enslaved were starving and tortured incessantly. If Anderson escaped, McDaniel said “he would be recaptured, tied up, and cut to pieces [referring to being whipped], and sold to a slave trader in New Orleans.” McDaniel escaped and managed to see his wife and child again before seeking freedom in Canada.

Despite these atrocities, a college history of Jewell describes McDaniel as a good Christian. He gave a large donation to the college in the 1850s, which helped keep Jewell in existence during a period of financial troubles. That money came from wealth acquired through the labor of enslaved human beings.

While the capital used to build William Jewell has a direct connection to the exploitation of enslaved people, members of the SMJP also determined that even the early campus was built on the backs of enslaved labor.

Jewell Hall—the oldest and most recognizable building on campus—was constructed by forced labor from start to finish.

The building, completed in 1858, is a longstanding symbol of the college. Visible throughout much of Liberty, where William Jewell is located, it is an icon of the oldest continuously running college west of the Mississippi River. 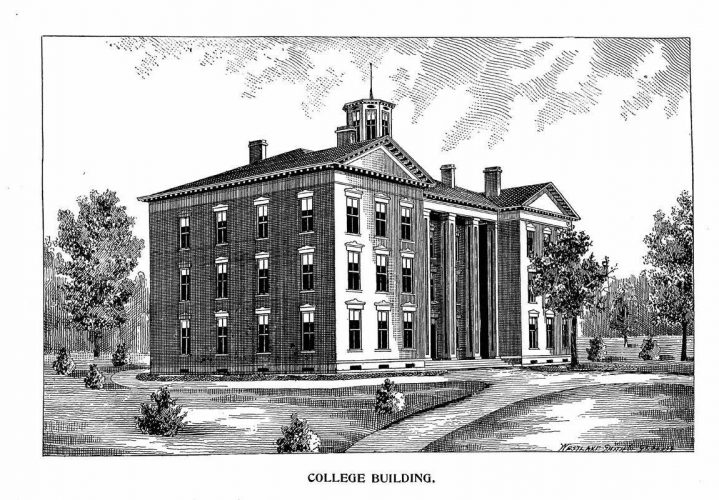 The SMJP faces opposition from the college administration

At his lecture, Wilkins made clear that the most challenging part about studying William Jewell’s history of slavery was not conducting research but the opposition from the school’s administration.

From the beginning, there has been a clear divide between the college administration and those involved with the Slavery, Memory, and Justice Project.

When they first formed the SMJP, members hoped to collaborate with the administration. However, that soon changed when the administration declined to support the SMJP, and instead established its own investigation into Jewell’s past: the Racial Reconciliation Commission.

When organizing the SMJP, members studied how other colleges went about investigating their history of slavery. Wilkins said schools like Brown University and Washington University in St. Louis (which began as a student-led project and was later adopted by university administration) set the gold standard for universities studying slavery and show the benefits of administrative support when studying institutional history.

According to Wilkins, having two groups on campus researching the college’s ties to slavery is “unusual on a national level.” While the SMJP focuses solely on examining slavery’s influence on the college’s history and founding, the Racial Reconciliation Commission intends to review the college’s entire history in a much shorter timeframe.

The RRC’s ambitious timeframe and broad scope differ from the SMJP, which has held from the outset that there must be a long-term and meaningful study into the school’s pro-slavery past before its effects on other issues in the college can be evaluated.

“There are important differences [between the SMJP and RRC]. The most important is this: one group was established by the Jewell administration and speaks with its authority, the other group does not,” Wilkins said. “Who has the authority to say what is true about our college’s past? Who has the right to educate our community about its history and call for policies to shape our historical memories in more honest ways?” 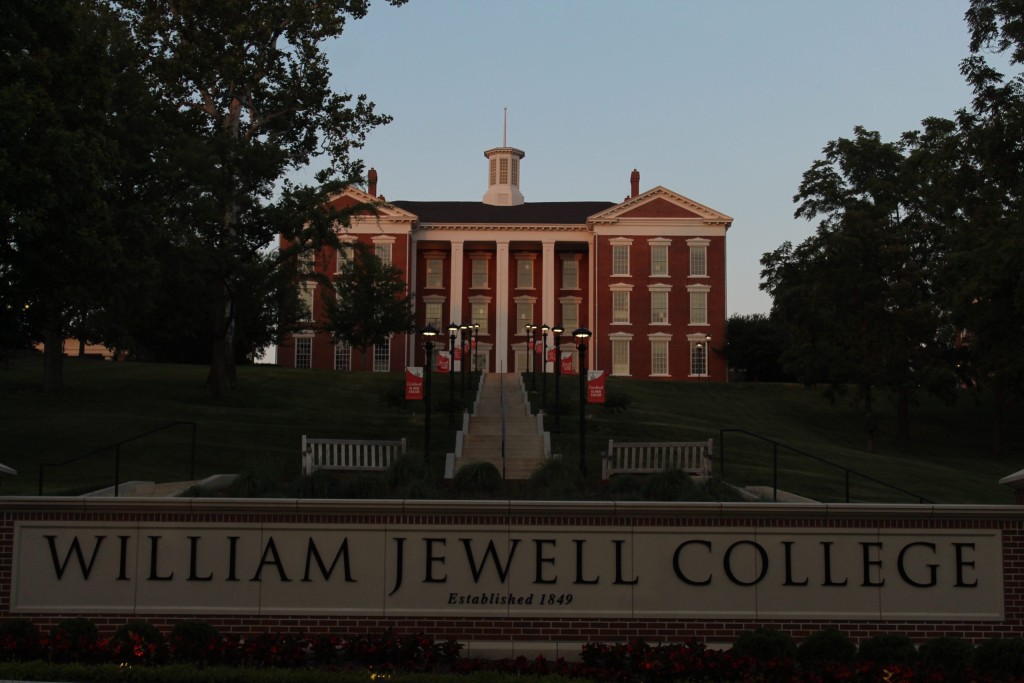 When the Jewell administration released a video in April 2021 announcing the formation of the RRC, Wilkins was listed as an advisor to the commission. But Wilkins had already turned down a spot on the commission and his name was used without his consent.

“I think the reference to the research my students and I were doing implied that we had been working with the RRC or had some kind of influence on its founding and structure initially. That is untrue. In my case, I declined to serve on the RRC because of my reservations regarding its approach to studying Jewell’s history of slavery,” said Wilkins.

Wilkins believes the RRC should have recognized the research of students at the college and given credit to the SMJP for doing much of the preliminary work. Even though the SMJP’s initial findings were published and publicly discussed before the RRC was formed or its report was written, there is no mention of an SMJP member’s work as affiliated with the project.

“I am committed to promoting awareness of the SMJP students’ work because those students deserve it not only based on the quality of their work but also because student scholars, in general, should have the right to tell what is true about a college’s past and have their work judged fairly, rather than diminished just because it is written by students and does not have the administration’s authority behind it,” Wilkins said.

Ultimately, Wilkins’ experience with the college’s administration and the RRC has led him to believe that his work will be more valuable and impactful outside of William Jewell.

In December, he plans to leave the college and work in public history and community education.

“Hell hath no fury like a very mild-mannered professor who feels like his students were treated unfairly,” Wilkins said in his lecture.

Next year, Wilkins will work with The Winter School, a community school in Lecompton, Kansas, and start a public history initiative with several others focusing on documenting all aspects of the slave trade in Missouri. He also plans to write a book about his experiences with the SMJP.

For now, Wilkins continues to guide the SMJP—hoping more people will familiarize themselves with the research and how William Jewell’s pro-slavery past still affects the college and the region surrounding it.

“It is not every day that students have a chance to rewrite the origin story of their college in ways that promote a truthful, meaningful reckoning with the past,” Wilkins said. “The students have a different, more powerful kind of authority—they have produced intellectually rigorous, morally serious work, and they deserve to have that work recognized and celebrated and respected.”

Learn more about the Slavery, Memory, and Justice Project:

Watch part one of Wilkin’s lecture series on the SMJP here.