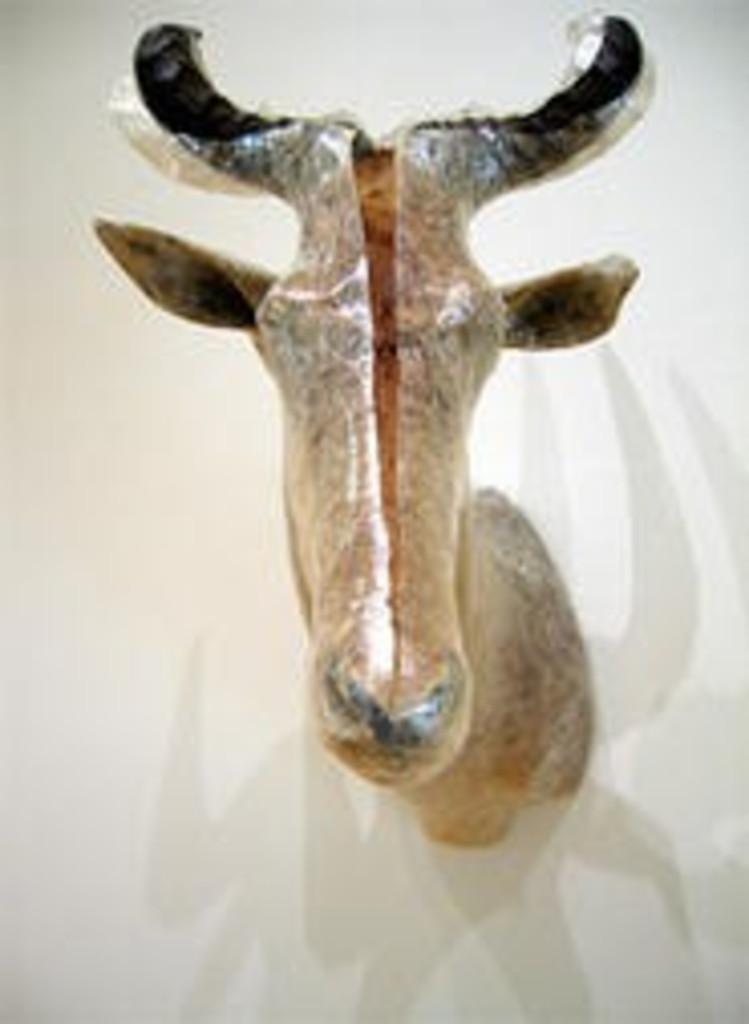 The animal exhibition is inevitable. Curators almost always organize at least one in their careers because animals can be the perfect stand-ins for broader personal, social, cultural, ethical and political agendas. Anne Pearce’s Beasts at Rockhurst University’s Greenlease Gallery is a familiar riff on the ubiquitous animal exhibition, but she has done it right and curated a tight exhibition with local and national artists. And it’s the Kansas City stalwarts who deliver the goods.

Based on Pearce’s response to an essay called “The Animals Reject Their Names” in Margaret Atwood’s book The Tent, the show traverses a varied terrain of conceptual and formal ideas. The exhibition also reflects, in part, a larger cultural anxiety over the environment and global changes.

Tammy Kennedy offers the most visually rewarding piece with “Untitled,” a taxidermic hartebeest in Scotch-tape chrysalis. Kennedy has split the cocoon of tape from snout to horns, allowing the horns to almost, but not quite, break free from the translucent shell. Taxidermic trophy animals carry their own histories of colonialism, machismo and empire, adding a layer of narrative to this already rich piece. The furred interior of the shell, where the hartebeest’s hair has stuck to the tape, causes an emotional and visceral shiver — how creepy the stuck-on fur, yet how gorgeous the texture.

Kennedy’s containment strategy resonates with the work of John Peterson, who embeds plastic spiders in small, scalloped glycerin tablets that litter the floor and cling to the wall. They lend the exhibition a playful component, as do the stylized digital prints with owls and hugging bears by Christina Vantzou. Michael Kruger’s intimate colored-pencil drawing, “Monsters That Walk the Earth,” shares Vantzou’s naïve approach, his outsider’s innocence punctuating the quirky juxtaposition of owls, bears and other animals against red earth covered with tiny tufts of grass, mushrooms and other flora.

Anxiety about our fouled landscape and otherworldly genetic mutations inform Davin Watne’s and Jessie Fisher’s works. Paradoxically, beauty is the vehicle by which both artists convey their alarm.

In Watne’s “Coyote Y Pollos,” a small, nude child sits cradled within the reclining body of a coyote. According to Pearce, the dog and child are Watne’s. The two sit in a desolate landscape that is lovely yet strewn with shotgun casings and cigarette butts. The child looks out over an expansive vista, where a fence suggests the dangerous, politically charged border between Mexico and the United States.

Fisher’s lushly painted “Double Cow in Landscape,” meanwhile, is simultaneously beautiful and grotesque. The mutant cow seems to have birthed an even more horrifically deformed calf. Yet they stand, in a portrait pose, below yellow roses that belie the environmental toxicity suggested by their genetic mutations.

Beauty functions as itself instead of framing peril in Barry Anderson’s single-channel video “Treebeasties.” Saturated, bright colors create a visual sanctuary, and the piece propels us through a forested fantasyscape in which Anderson has embedded whimsical animal heads and cartoonish human and wolf-man heads. This pastiche of visually appealing imagery creates an alternative space in which to find a respite from the disquietude of our environmental and social ills.