Wild Bill’s might not be quite legendary, but it earns its chops 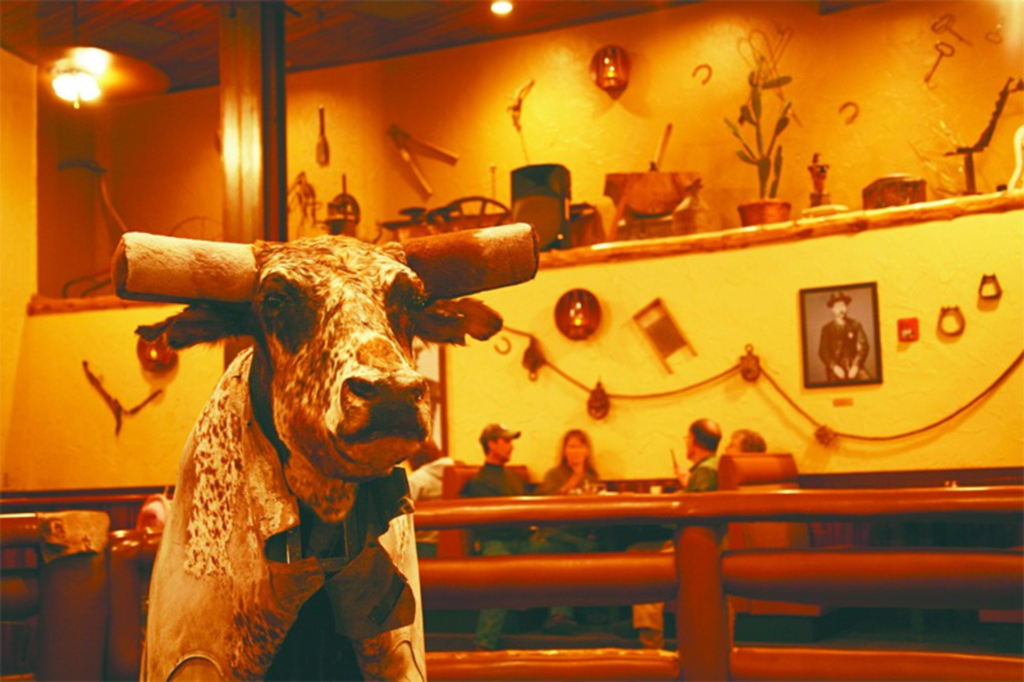 When the California-based Saddle Ranch Chop House finally threw in the bandanna at its huge leased space at the Legends entertainment complex in Wyandotte County, it left a few things behind. Of what remained in the dining room, what was big enough to stage a small rodeo? The mechanical bull, for one thing. Most of the rustic furnishings stayed behind, too. And the big circular bar. And Marc, the muscular bartender who looks like a cowboy — or country-western singer.

I guess you might have called it a turnkey operation for the next tenant, the locally owned K.C. Hopps, Ltd., which runs the 75th Street Brewery and the Blue Moose Bar & Grill. That company took over the space last summer and turned it into Wild Bill’s Legendary Steakhouse & Saloon. The legendary claim may be putting the cart before the bull, but copies of vintage photos of former Lenexa resident James Butler Hickok — the notorious Wild Bill himself — are scattered throughout the massive space.

The dining area still looks much like it did during the Saddle Ranch’s short-lived heyday, but several employees assured me that the joint is a lot cleaner now and the food is better. And they’re right on both points. I have to admit I haven’t been the biggest fan of the food or service at several of the K.C. Hopps venues that I’ve visited over the years, but there’s something appealing about this new concept: It’s sort of an Outback Steakhouse with a sense of humor. And the sense of humor is completely unintentional, which is probably why it works.

I was pleasantly surprised with almost everything I tasted.

Meals at Wild Bill’s begin with a complimentary basket of thick potato chips served with a dollop of ranch dressing. Judging from the response we saw at other tables, little kids love this low-rent amuse bouche — and why not? Who can turn down a freshly fried chip? I usually can, but this time I didn’t.

The starter selection is pretty standard-issue — two kinds of fried chicken wings, artichoke-and-spinach dip, calamari — none of which sounded interesting to me. On the night I dined with Bob and Kitty, we halfheartedly agreed on the thick-cut fried onion rings, which were breaded in a peppery batter that was so heavy, I could have used the rings for brass knuckles.

Bob and I also split the wedge salad, a creative variation on that familiar culinary concept, with the traditional heavy dose of ranch dressing and blue cheese dotted with onions, bacon, slices of tart apple, golden raisins and spicy pecans. It was excellent, and the kitchen graciously split the wedge for us — a task that not all restaurants are willing to perform these days.

After insisting that she wanted a nice juicy steak, Kitty ordered buttermilk-marinated chicken tenders instead. Apparently she was seduced by the sides. “You know how I am about waffle fries,” she said.

I didn’t, but we both also ordered white-Cheddar mashed potatoes, which turned out to be flavorful but disappointingly gummy. Bob had the 6-ounce center-cut filet— a 28-day aged Angus — that arrived looking suspiciously prefab to me, but he said it was tasty. “Not Plaza III quality but really not bad for a moderately priced steak,” he said. My steak sandwich, served on a great potato-onion hoagie roll, was good if not especially tender. (And the stingy spoonful of caramelized onions must have been measured out with tweezers.)

That night’s special desserts were probably too fancy for the venue: two miniature cheesecakes and two miniature patties that were passed off as “chocolate mousse.” The mousse patties — the very term makes me cringe — were visually uninspiring. Bob said he had seen Little Debbie cakes with more panache.

Judy, Carrie and Franklin joined me on a second visit a few days after Thanksgiving, when only a handful of tables were occupied. “Sunday nights can be a little slow,” explained bartender Marc, who doubled as our waiter. “This place is hopping on the weekends.”

Carrie, a culinary professional, thought the wine list was unexceptional but was impressed with the 14 beers on tap (including Guinness and Fat Tire) and thought the cocktail selection was first-rate. “You don’t find a Dark and Stormy in just every steakhouse,” she announced.

You also don’t find fried buttermilk-battered bull balls, but the Rocky Mountain Oysters at Wild Bill’s are one of the top sellers. Still, like most anything battered and deep-fried, the crunchy balls tasted like fried crunchy balls. They could have been chipmunk-cock croquettes for all we knew. But anything crispy would have been fantastic in the punchy chili dipping sauce that arrived with the starter.

Carrie, who was returning to New York City the following morning, wanted a good Kansas City ribeye for dinner. Wild Bill’s 16-ounce bone-in hunk of beef didn’t really look like a hefty ol’ ribeye (well, maybe a ribeye cut in half), but it was surprisingly tender and sided by a fine baked potato and grilled asparagus. Judy’s buffalo short ribs were braised in a supple chipotle chili sauce; also excellent was Bob’s meaty half-rack of baby back ribs in a sticky-sweet molasses-based glaze.

My chicken potpie wouldn’t have won any awards as a new spin on a country classic. The cream sauce was a little too salty, and the chicken, alas, was so stringy that I could have braided the pieces together. But the vegetables were fresh and crisp, and it was topped with a flaky biscuit.

This time we shared two of the better — and simpler — desserts: a nice slab of bourbon pecan pie, topped with real whipped cream, and something called brownie s’mores, made with two deliciously fudgy brownies and a double-row of fire-charred marshmallows. Carrie loved it.

“It’s really kind of a fun place,” she said as we rose to leave. “I’m sorry that no one got on the mechanical bull. I would have liked to see that.”

Carrie shook her head. Marc looked at the rest of us to see whether anyone was interested. Me? No way! It takes a lot more Rocky Mountain Oysters than I have to go bull riding these days.