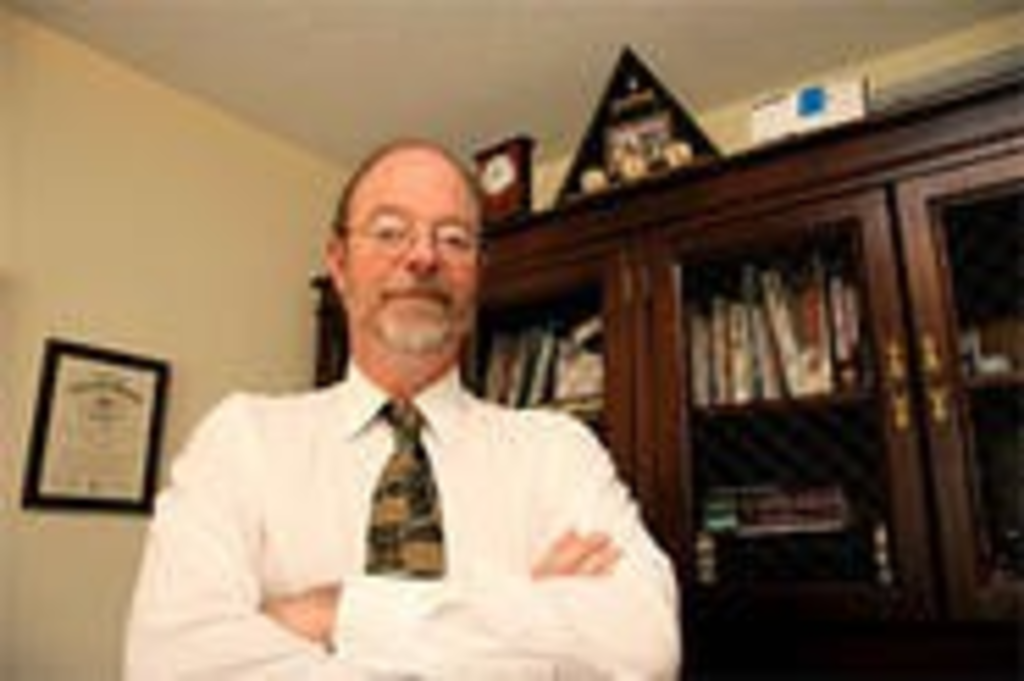 In October 2006, a few months after Allen DeCamp of Shawnee had buried his father, Robert, he received a letter that made him suspicious. It was from a retired Army lieutenant colonel named John Angolia.

“I have read of the passing of your husband and can understand the grief you are feeling,” Angolia wrote. “I see that he was a veteran of WWII.”

DeCamp had made sure that his dad’s military status was listed in his Kansas City Star death notice. His father had left college to serve in Panama, eventually working his way up to staff sergeant. The letter had been addressed to DeCamp’s 86-year-old stepmother but was forwarded to DeCamp because she is debilitated with Alzheimer’s.

“I have devoted my entire adult life to the service of my country,” Angolia’s letter continued. “Additionally, I have expended considerable time, energy, and money … and established a 3,700 sq. ft. non-fee historical museum dealing with artifacts of that period.”

Angolia asked to purchase “or receive as a donation” any war souvenirs that Robert DeCamp may have left behind. The letter promised that the items would be shared “with the many visitors from all over the world who come each year to see the displays I have been able to put together. In this manner the material and its history can be preserved.”

DeCamp, a private-practice litigation lawyer, noticed that the museum didn’t seem to have an official name, company letterhead or formal address. He Googled the letter’s return address, which turned up a sale listing for Angolia’s almost-3-acre estate in Stillwell. The site included pictures of a private military collection in the basement.

DeCamp’s father had given away the last of his memorabilia — his silver dog tags — to a stepson as a wedding gift. But DeCamp began to question Angolia’s motives.

Mike Bussell knows the feeling. Bussell says that in late May 2001, his 79-year-old grandmother was also approached by Angolia, who had read about her husband’s World War II service in an obituary a few weeks earlier. Bussell’s grandfather had been a B-17 bomber pilot based in England, part of the “flying fortress” raids over Germany. Bussell, who works as a police officer (he declines to name the department, saying he’s commenting to the Pitch as a private citizen), says Angolia came to his grandmother’s Overland Park doorstep. She gave him regalia, including wartime photos, medals and a shrapnel-pierced bomber jacket.

“She was under the understanding that he was collecting for a museum,” Bussell says. But Bussell grew angry when he called to find out where he might see the goods and learned that it would be in a residential basement. “I told him we weren’t interested in adding to his personal collection,” he says. After arguing with Angolia, he says, he got the goods back. “She felt embarrassed, like she had been taken advantage of. She’s from a generation of people who take others at their word.”

Angolia says he is misunderstood. Recently, he offered the Pitch a tour of his showroom. Just north of Metcalf and 183rd Street, Angolia’s estate features lush gardens and ornate statues. (It’s for sale, listed at $990,000.)

His collection is stored in a rec-room-type space with separate rooms for each service branch: Army, Navy, Marines and “Aviation,” which encompasses the history of flying for all service branches. The antique inventory includes M1 and Japanese Arisaka rifles, wall-to-wall display cases lined with Purple Heart medals, about 700 unique German belt buckles, swastika fender ornaments, swastika-emblazoned beer steins and busts of Hitler. Angolia estimates that he has more than 125 mannequins dressed in period uniforms. Incongruously, one room contains his desk and computer, and another features a wet bar and pee pads for his dogs, which are trained to urinate indoors.

The silver-haired Angolia, 71, says his interest in memorabilia started at age 8, a product of growing up in Washington, D.C., during a time dominated by World War II news stories and war-bond drives. Angolia says he enlisted in December 1953 and spent 26 years in the Army before retiring. He says he served in Korea and Vietnam. In one corner, his own uniform boasts two Bronze Stars and an Army Ranger pin. Angolia says he guarded dignitaries at John F. Kennedy’s funeral service and taught tactics at the U.S. Army Command and General Staff College at Fort Leavenworth. He has written 35 books, including For Fuhrer and Fatherland: Military Awards of the Third Reich and Belt Buckles & Brocades of the Third Reich. Most of his titles have sold 5,000 to 10,000 copies, he says.

Angolia calls his museum “semi-private,” meaning invitation-only. He won’t disclose how many visitors he gets each year, but he claims “busloads” of veterans came to see his stuff a few years ago. He says his reputation as a collector draws unsolicited donations from veterans. “I’m world-famous,” he says.

When asked about the letters he sends to widows, Angolia says: “Does this look duplicitous?” He waved a hand toward the display cases. He declined to say how many letters he sends out annually.

He would never sell donated goods for profit, he says. “I store it until I’m capable of displaying it. I don’t sell it because what I don’t use today, I use tomorrow.” He says that he and his wife plan to build a new home in Leawood for more display space. “I am what I am. Everything I say I am, I can verify.”

Meanwhile, DeCamp called various consumer protection agencies but found no basis for filing a legal complaint. “I’m not really a consumer, and he’s not in the stream of commerce, so to speak,” DeCamp says.

But he recently discovered a May 2, 1999, posting on an Internet forum devoted to war gear, the K98k Bayonet Collector’s Network. Beneath a listing for “LTC. (Ret.) John R. Angolia” is a straight-up solicitation: “I collect Third Reich material of all organizations. Because my collection is so large, I have a fair amount of duplicates that are for sale or trade.”

“He’s both bought and sold from us, but not consistently,” says John Conway, Manion’s vice president of sales and marketing. Conway recalls Angolia selling numerous garage-sale-quality trinkets a few years ago. Angolia hasn’t sold anything to Manion for about to years, Conway says.

“Most of what he’s brought in has been really kind of low-end, undesirable stuff over the years, like uniforms without insignias and bits and pieces of stuff. If he’s selling anything that is really great stuff, it’s not coming through us.”

When the Pitch called Angolia and asked if he was using the Internet or auction houses to unload grievers’ goods, he reacted angrily.

“I don’t dispose of anything that I get from a widow or a vet,” he shouted before hanging up the phone.