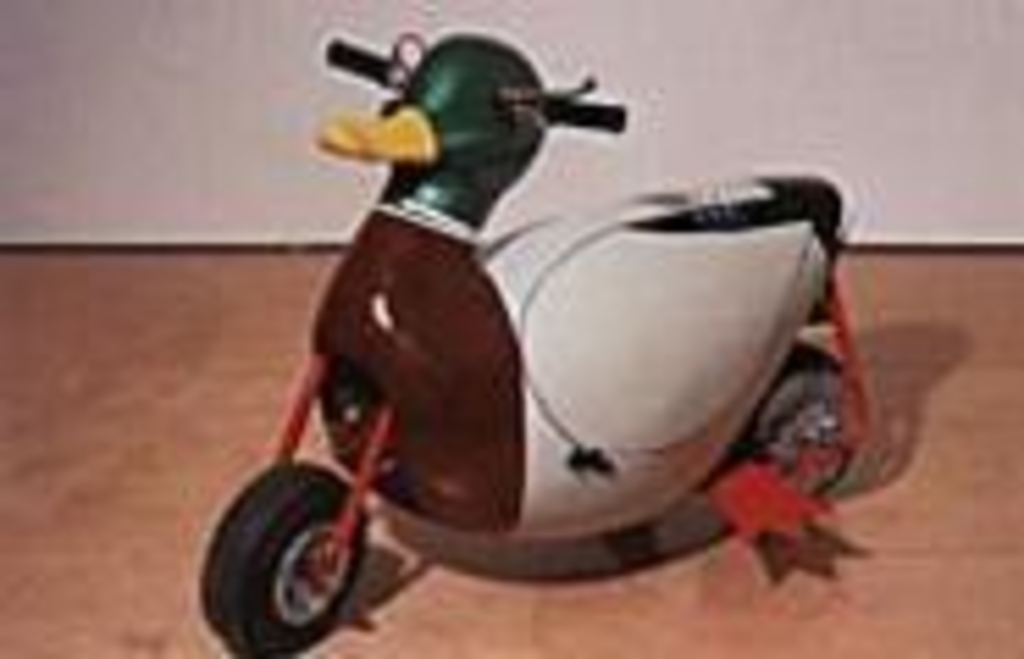 Adolescence, the mysterious process that transforms innocence into experience, never completely exits one’s psyche. During those years, dreams become solid plans, play becomes work, and an undetermined future becomes a mad-dash present. The experiences gleaned during this hard-fought transformation contribute to the successes and failures of adulthood.

When artist Mike Kelley moved from Detroit to teach at CalArts, his work was already drenched with adolescent associations: Stuffed toys became psychosexual props; a janitor’s identity became confused with that of a rock star; and scientific research became the equivalent of collecting and organizing the junk in one’s room. It’s as if the upper Midwest couldn’t abide by such sharp-edged folly; Kelley joined the rank and file of Southern California artists — most notably, John Baldessari and Paul McCarthy — and together, by accident or by design, they influenced a new wave of malcontents. The resulting work by three young artists from this melee now occupies the Gallery of Art at Johnson County Community College.

Two of the three artists here come across as if their best work is yet to come, though admittedly it’s difficult to discuss maturity in this context. Still, Liz Craft’s strange architectural forms read like formulaic templates for future expanded environments. And Chris Finley’s paintings and sculptures introduce myriad possibilities but no definite direction.

Finley’s paintings go further than does his sculpture. In “Drool House Zoom Stretch Flip,” simple imagery — a head, a hand, a dog, a butterfly, a house — expands and contracts to become a swirling, semiabstract visual attack. Inspired by computer imaging and odd color combinations, he found a way to present “too much information” so it feels like a sickening “just right.” Unfortunately, many visual elements in Finley’s sculpture cannot be seen; they’re either stuffed inside rain gutters or capped off with Tupperware lids. Further material exposure and manipulation — some “zoom” and “stretch,” for example — could infuse his sculptural work with a good dose of barely contained menace.

The visual confusion inherent in Craft’s two large sculptures may be due to a lack of dialogue between them. Each comes across like the catastrophic result of some suburbanite’s foray into lawn sculpture, but here the similarities end. “Round Off,” a topsy-turvy Dutch windmill supported by two of its bent blades, has a formal, constructivist bent and is made entirely of painted wood. “Monkey Dreams,” on the other hand, sports brown carpeting, sheet metal, and painted elements (including three red monkeys), and it goes for an amorphous anti-aesthetic. They leave one wishing for more: two or three more marvels of bad taste, maybe, with stepping stones leading from one to the next.

The rock-solid work, with a clear homage to McCarthy and Co., comes from Pentti Monkkonen. His two “fowled” minibikes, “Swancycle” and “Duck Bike,” strike an absurd chord somewhere between merry-go-round and hell-on-wheels. Both pieces are fully functional, with pull-starts, accelerators, brakes, and a hatch — built into each fiberglass bird body — to access the fuel tank and engine. Neither one has a seat, though, because if a child sat down for a ride, he’d break his neck. Conversely, an adult astride either of these gleaming putt-putters would feel like an absolute fool. Herein lies the realm of adolescence, a teetering brink of indecision, rapt desire, and calamity: an ill-fit by its very design.

Monkkonen’s third piece, “See-Saw,” goes for a perceptual shtick, where one sees the positions of both the seesaw’s occupants, a boy and a girl, simultaneously. This results in an X-shape construction made from slabs of wood that are painted red. The girl’s braids defy gravity when she’s up; the boy’s knees bend when he’s down. We see. We saw. This piece bears little relation to the bird bikes, but a shared visual clarity of color and shape lets one make the jump from dirt track to playground with relative ease.

Silly, even preposterous at first glance, Monkkonen’s sculptures entice with unbridled play, and then, with the cunning and guile of an adolescent, they convince us to believe in the merits of maddening work.

California Dreamin’
through May 24

at the Johnson County Community College Gallery of Art