The Northland is pissed off. What does that mean for Kansas City, the police, and Mayor Quinton Lucas? 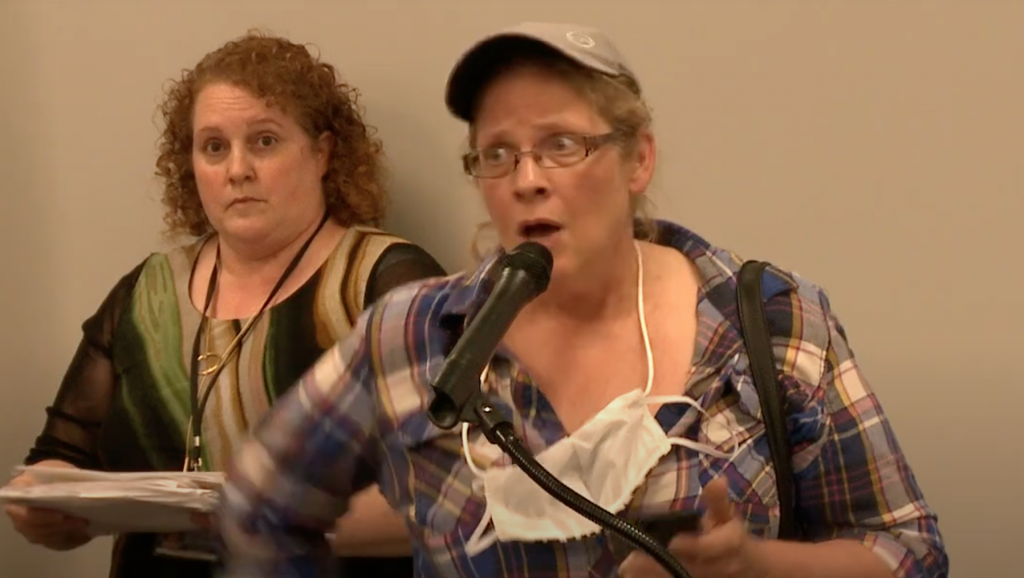 Speakers from the livestream of the town hall meeting.

The crowd at a hastily called town hall meeting in Kansas City’s Northland on a rainy Thursday night in the last week of May was a balm to a city councilwoman’s wounded heart.

“I kind of had my fingers crossed, thinking, ‘well, I hope a few people show up,’” said Teresa Loar, who has represented the area on and off for decades.

Not these Northlanders, anyway.

Somewhere out there, in the sprawling neighborhoods that make up the portion of Kansas City north of the Missouri River, you’ll find young families, first-generation immigrants, people of color. A third of the student enrollment of the Park Hill School District up there is non-white. Almost 45% of the students in North Kansas City Schools, another district in the region, are non-white.

But the region’s diversity was not reflected at this meeting called by the Northland Neighborhoods Inc. The crowd, estimated at around 500 people, was nearly entirely white and mostly over 55.

A week before, Mayor Quinton Lucas and all eight City Council members who represent districts south of the river had voted to move about $42 million of the Kansas City Police Department’s budget into a fund that would give the city’s elected representatives some say over how law enforcement dollars are spent. Currently, that privilege falls to the Board of Police Commissioners, whose members, except for the mayor, are appointed by Missouri’s governor.

The move was immediately—and falsely—characterized as defunding the police. Lucas’ budget actually increases spending on police services by $3 million in the next year. The creation of a special fund is a creative way to bring some accountability to police spending and perhaps remedy some of the crippling mistrust of police that is worsening Kansas City’s violent crime situation.

The bigger problem is the process. Rather than introduce the ordinance and go through the usual series of committee meetings and discussions, Lucas and council allies opted to introduce the measure and vote on it the same day.

“If it had been vetted out and if there had been a presentation explaining how everything was supposed to work … it would not have gone over all that badly,” Dan Fowler, one of the four Northland council members left out of the process, tells The Pitch. “The Northlanders are as stunned about the process as they are about the result.”

The mayor said the council needed to act before the Missouri legislature preempted it from doing so, which sort of makes sense. Lucas also said there was no way the four council members who represent the Northland would support the plan, which is likely. And so, he said, there was no point in encouraging a discussion that would undermine a clear council consensus. That’s the part that’s increasingly looking like a bad idea.

“Everybody in this room was disenfranchised by the eight south council members and by the south mayor,” said Greg Mills, a retired Kansas City Police Department major who spoke at the meeting. “They did it to us once and they’ll do it to us again because they saw that they can.”

Note the language here: The south council members. The south mayor. Them against us. North vs. south.

“There’s only one solution,” said another speaker, Brandon Dunaway, one of the younger voices. “We start our own city. And we separate from Kansas City.  We stop giving them our tax money. They don’t want the cops down there, we’ll take ‘em all up here. (Applause.) When they send their health inspectors up here we ship ‘em back across the bridge. (Cheers.) When they send their fire inspectors up here, we kick ‘em back across the bridge.  We start our own city, but we keep our own money. (Applause and cheers.)”

I spend a few moments trying to get my head around this vision of a city crawling with cops but with uninspected restaurants and broken sprinkler systems. Magical thinking, in any case. It would be harder for the Northland to secede from Kansas City than it’s been for Kansas City to gain local control over its police department.

In many ways, the current unrest is more of the same. Ever since Kansas City began annexing chunks of property in Clay and Platte counties after World War II, elected officials and some residents have complained about not getting their share of services and attention.

What’s new—and ugly—is the emotional focus on the police, and the involvement of certain Missouri legislators.

“I think our state legislature has gotten more mean-spirited as well as anti-urban,” Katheryn Shields, a councilwoman from south of the river, tells The Pitch.

Kansas City police have always favored the Northland as a place to live and send their kids to school. In the recently completed legislative session, Missouri Sen. Tony Luetkemeyer, a Republican who lives in Parkville but who represents parts of Kansas City, successfully pushed legislation to allow police officers to live outside of Kansas City limits.

Both Lucas and Police Chief Rick Smith opposed the trashing of the longstanding residency rule. “Outside occupying forces lead to more problems, not fewer,” Lucas tweeted. But the move established Leuktemeyer as a champion of the Kansas City Fraternal Order of the Police, the reactionary union representing Kansas City police officers.

He’s embraced the role. Leuktemeyer and several other Republican legislators from Clay and Platte counties have asked Missouri Gov. Mike Parson for a special session to pass legislation preventing locally elected leaders from exercising control over how much to fund law enforcement and how to spend the money.

“If there was ever a moment showing state oversight of the KCPD is right for the city, it was this vote,” Leuktemeyer says on his Facebook page, referring to the council’s budget action. Strong words, coming from a guy who doesn’t even live in the city chafing under state oversight.

Like most state legislators, Leuktemeyer is ambitious. “Defund the police” and “back the blue” are attention-grabbers in Republican circles. Leuktemeyer and his colleagues will ride this wave regardless of the unrest it kicks up.

Not that there isn’t plenty of unrest already. At the town hall, Loar used her time at the podium to stir the waters.

“Our votes don’t count,” she said. “It’s only south of the river that counts. Yeah, our tax money sure counts. Because we are a net zero taxing jurisdiction of this city. That means we give more money than we get back.”

I attempted to verify Loar’s claim, only to discover that, as Chris Hernandez, the city’s communications director said in an email, “There is no simple answer to your question.”

Kansas City’s tax revenues come from multiple sources. No one knows exactly what percentage of earnings tax and sales tax revenues are generated north of the river. About 40% of the total revenues from property taxes come from the portion of Kansas City in Clay and Platte counties.

Figuring out who gets what is just as complicated. “The city provides nearly 400 programs and services citywide,” Hernandez said. “In the Northland, we have recently seen significant infrastructure improvements and investments, including a new fire station, new police station and road reconstructions, as well as the $40 million Twin Creeks new water and sewer infrastructure project.”

But Fowler tells me that when his constituents talk to him about city services, it’s usually about three things: “Roads, streets and bridges,” he says. “Why don’t our roads get fixed? Why are we not getting the same amount of (general obligation) bond money as the Southland?”

Fowler is an eminently reasonable elected official and he studies data. He says the Northland’s share of the bond issue the citizens passed in 2017 for street and sidewalk improvements and other infrastructure projects keeps getting pushed to the back of the list.

But there are many lenses through which to view city spending. Shields, who is from the 4th City Council district and elected citywide, points out that the council voted earlier this year to spend $36 million in capital improvements funds on a controversial soccer complex in the Northland. And representatives from all six council districts agreed to contribute money for a police memorial garden in the Northland.

“For a long time they’ve considered themselves victims,” Shields says, referring to Loar and other Northland representatives. “And when you’re the victim, anything you get comes to you because you’ve got an absolute right to it. And anybody that votes differently from you, that’s just one more example of how you’re a victim.”

The Northland is hardly the only part of the city to feel underrepresented.

“I have a lot of empathy for the Northland,” says 3rd District Councilwoman Melissa Robinson. But she notes that her own district on Kansas City’s east side is struggling from decades of neglect and redlining.

“There are so many disparities in terms of city investment in the 3rd District,” she says.

You’ll hear similar complaints in the Southland, and just about anywhere in Kansas City.

Interestingly, the city’s most recent Citizens Satisfaction Survey shows that, while only around a third of Northland residents are happy with the maintenance of their streets, that’s quite a bit higher than the ratings south of the river.

In fact, for most of the metrics I looked at, including conditions of sidewalks, satisfaction with fire and emergency medical services, and neighborhood services, Northlanders were the happiest campers in Kansas City.

So maybe the crowd at the town hall meeting wasn’t all that representative of the citizens of a changing Northland. Maybe their neighbors don’t believe in their grim warnings of the crime wave that will wash across the Missouri River into Northland homes if police services are altered in any form.

But here’s what I know about Teresa Loar’s Northlanders: They vote. And they don’t forget. And, in their effort to reform a police structure that clearly is failing  Kansas City, Lucas and his City Council majority have thrown dry tinder on the hot coals of grievance that burn in their midst.