Why is this man in a chimpanzee mask hanging around outside the Plaza Hallmark store? 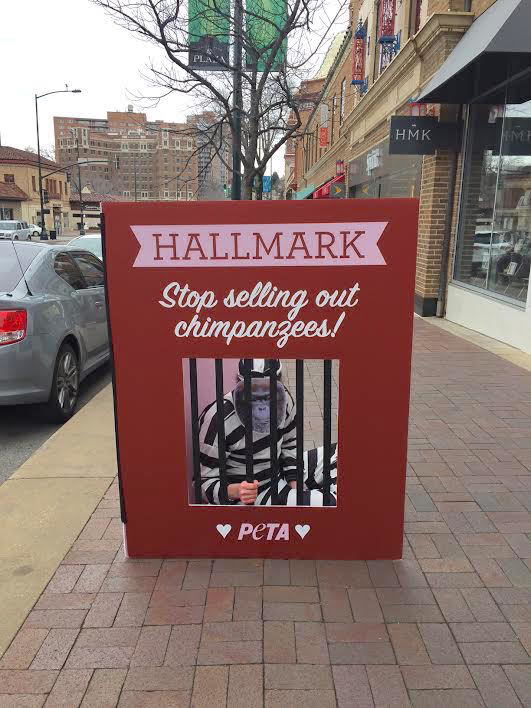 A little after noon today, two men in work boots and Carhartts and the same construction-outfit logo stamped on the left breast of their hoodies slowed down outside the Hallmark store on the Country Club Plaza. They took in the puzzling scene: a man in an old-timey, black-and-white-striped prison jumpsuit, crouched on the sidewalk behind a cardboard cutout of jail bars. Where one might expect to see a person’s head, there was instead a photo of a monkey’s face taped to poster board. His human hands clutched at the paper bars of the jail.

“What’s…what’s going on here?” one of the men asked.

Matt Bruce, a representative from People for the Ethical Treatment of Animals, was standing nearby, ready to explain.

“It’s our way of asking Hallmark to stop using chimpanzees on their greeting cards,” Bruce said. He was wearing human clothes.

The problem, Bruce and PETA say, is that the chimpanzees depicted in Hallmark’s cheery cards are being exploited. The wide smiles captured in the photos are actually a “fear grimace,” and many of the apes used in these images have been torn away from their mothers shortly after birth, causing psychological trauma. And, says PETA, some of the Hallmark chimps were provided by the Missouri Primate Foundation — “aka ‘Chimparty,’ which has been cited by the U.S. Department of Agriculture for keeping chimpanzees without sufficient sanitation, ventilation, and enrichment, among other animal-welfare violations.”

PETA’s been on this anti-chimp push for a while now. Last year, Hallmark’s competitor, the Cleveland-based American Greetings, pulled its chimp cards at PETA’s request. Hallmark hasn’t yet. But a spokesperson for the company tells The Pitch it hasn’t created any new chimpanzee photography in nearly a decade:

“Since then, any new card featuring a chimpanzee has been illustrated or pulled from our existing photo library of licensed or sourced images. Hallmark’s products and cards featuring animals are intended to celebrate the love, humor and happiness that they bring into our lives. Primates are featured on less than 50 of the more than 30,000 cards we offer.”

PETA says that statement “doesn’t address any of [its] concerns” about the chimps. Thus today’s demonstration.

Satisfied with Bruce’s explanation, the two passing workers moved along. A cold wind slashed in, nearly blowing the chimp’s prison off onto the curb. “We won’t be out here all day,” Bruce said. “Too cold.” The chimp turned his head but didn’t say anything.