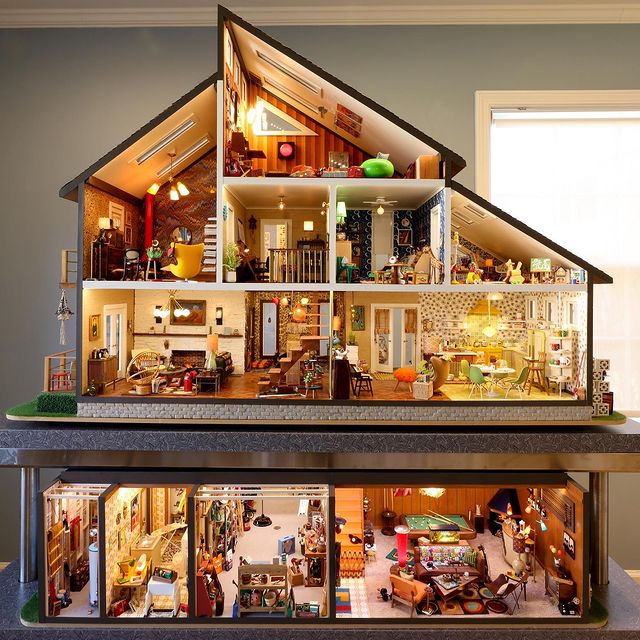 A full view of the MMH. // Courtesy of Annie Kampfe and Cliff Donnelly

Many of us spent early 2020 baking sourdough or dissociating in front of our computers and TVs. For Annie Kampfe and Cliff Donnelly, the past year was spent building a tiny home. No, not some 300 square foot minimalist house—the couple painstakingly built an astounding miniature rendition of a midcentury modern home inside of their real home in Kansas City. The house is scaled 1 to 12, meaning one inch represents one foot.

The house, dubbed MMH by the couple and their family (who didn’t want it referred to as a dollhouse) was something that happened all at once. It all started when Kampfe found a miniature needlepoint tiger rug at a craft store. 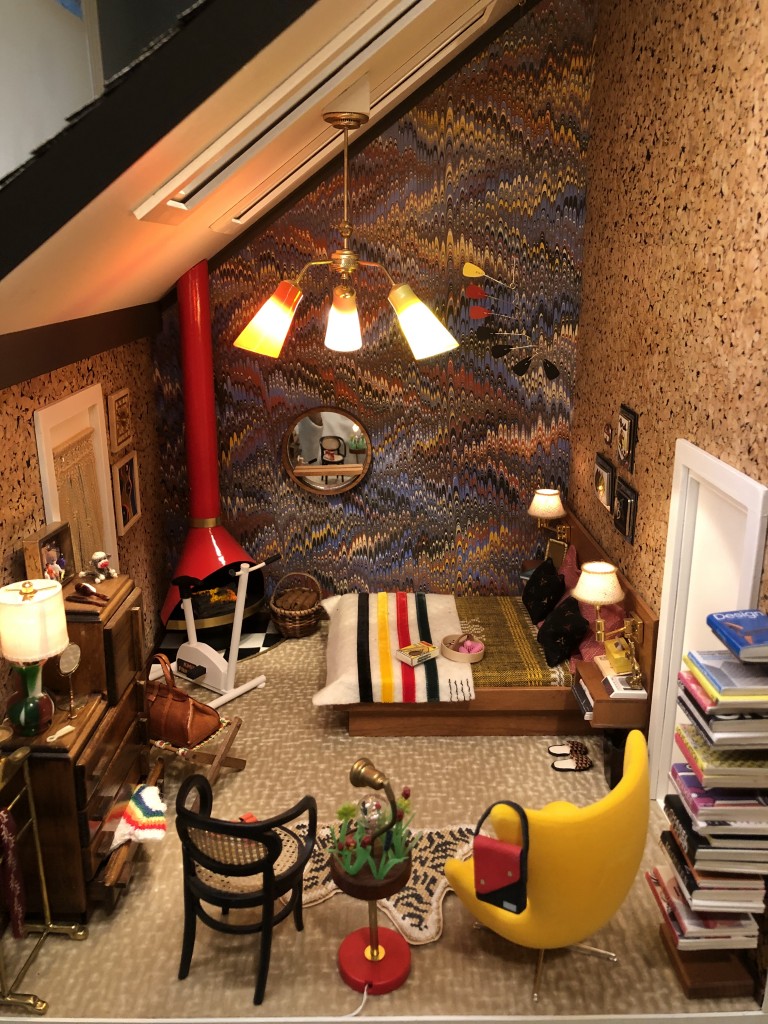 The living room of the house, with the bricks Annie laid.// Courtesy Annie Kampfe and Cliff Donnelly

“I was intrigued by the canvas, I wasn’t sure what it was for. A woman from a local needlepoint store said ‘I think that’s supposed to be a dollhouse rug,’” Annie says. “I immediately bought this little canvas and my husband was out of town on a golf trip and he came home I said ‘I’ve got this crazy idea. I want to do this, I want to build a miniature house.”

From there, the idea evolved. The couple found a dollhouse kit from a store in New Hampshire to begin their project. However, that wasn’t good enough for them. They wanted a more accurate midcentury modern vibe, so the couple flipped the dollhouse.

“We proceeded to recut almost every piece of it, but it had good bones to the kit. We just had to modify it to make it more midcentury modern and kind of more true to a real house,” says Annie

The midcentury modern design for the house was inspired by Annie’s childhood home—which her parents built and decorated in that style in the early ‘60s. According to Annie, who was an interior designer, her parents both had a progressive eye for architecture and design.

It was essential to the couple that every part of the design was accurate—down to the bricks that Annie laid with actual mortar. No carpet, lamp, or bed frame would be allowed into the house unless it fits into that midcentury style. 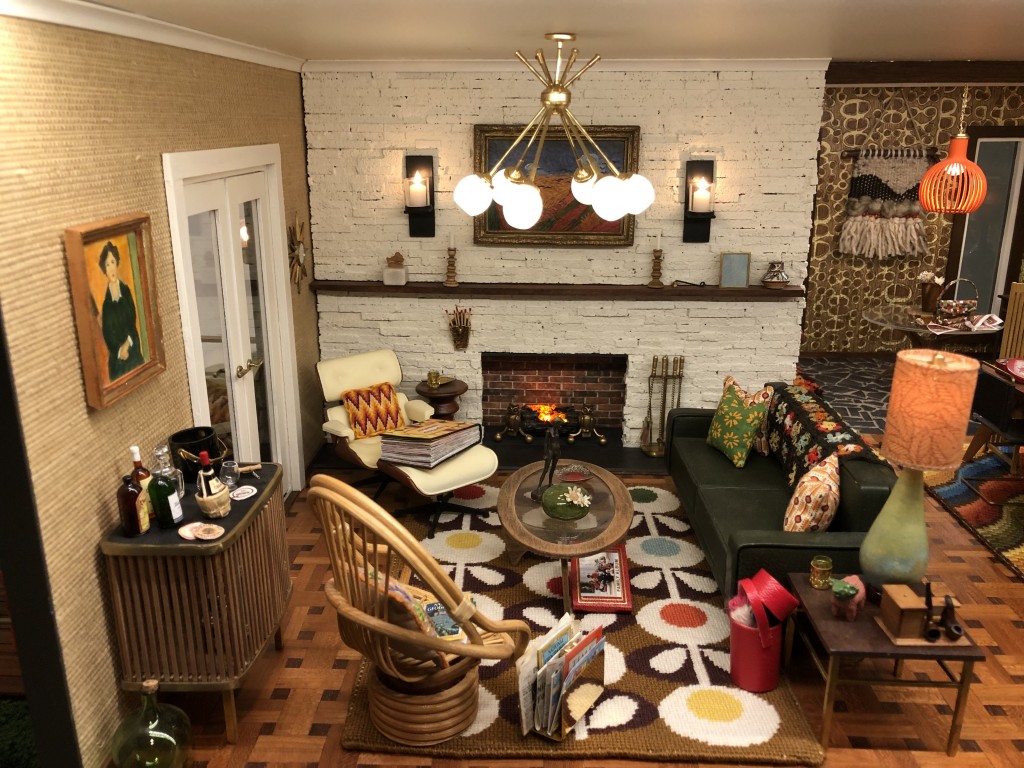 The living room of the house, with the bricks Annie laid.// Courtesy Annie Kampfe and Cliff Donnelly

Annie the designer and Cliff the handyman had the house’s frame about 90 percent done when COVID-19 lockdown hit in March. The MMH became their everyday project. Most of the furniture is vintage and sourced from mostly German vintage dollhouse pieces. Others came from artists Annie found online that are dedicated to miniature designs. All of the lights in the house are working, and most of them are custom-made by a friend who is a miniature artist.

“We used to travel before COVID-19,” Cliff says. “Every time we would travel somewhere we would look up to see if there was a miniature store in the town we were in.”

This way, the couple found pieces from Atlanta, Maine, New York, and even Paris.

The couple built an entire basement for the house out of plywood, because every good midwestern house needs a basement. They also changed the roof shape to fit more with the design, added a chimney wall with hand-done brickwork, added windows, and made sure the house had functioning electricity.

Cliff’s favorite room in the MMH is the garage because he spent days getting the garage door fully operational. Meanwhile, Annie favors the master bedroom because of the high ceilings—the master also contains the tiger rug that was the inspiration for the whole project. 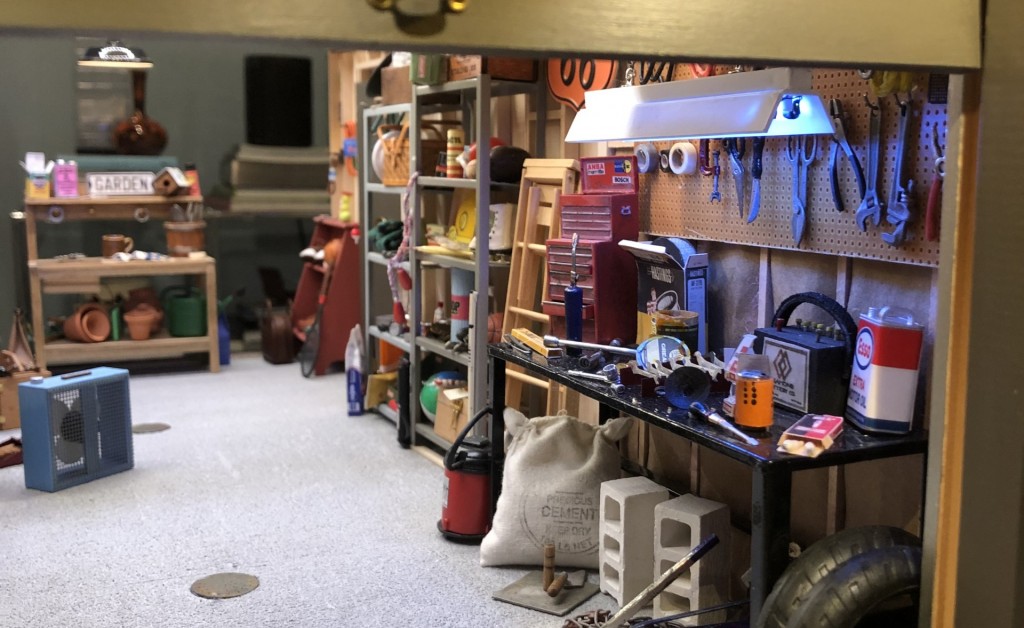 The garage of the MMH, with a working garage door.// Courtesy of Annie Kampfe and Cliff Donnelly

“The cork wallpaper is actual vintage wallpaper that my parents had hanging in the den of their house,” says Annie.

Annie and Cliff have nine children, and according to the couple, most of the kids thought they were crazy for building the house. But now that it’s complete, everyone wants one.

“Initially, from the get-go, half of the kids thought we were crazy,” Annie says. “Ironically my son that tweeted the photos I sent to him to show him that it’s complete. He was the last to come on board. But now, even he’s saying ‘mom, what’s your next house? You have to do another one.’ And we will.”

Once the house started gaining attention, the couple wanted to ensure that it turned into something that benefitted something close to their hearts. The couple is asking that fans of the house donate to The Alzheimer’s Foundation if they’re so inclined. Annie’s mother, who is 91, suffers from Alzheimer’s and her dad died of Dementia. Annie’s grandmother also suffered from the disease.

The MMH shares the same address as Annie and her parents’ previous home, although her mother can no longer recall the house at all. That’s part of what made this project such a work of love.

“It’s hard, it’s a tough disease,” Annie says. “Anything we can do to raise awareness, to raise funds. So many people say this mini house gives them such joy and happiness and we’re hoping people continue to donate because so many people have.”

To see more of the house, visit the MMH Instagram page. To donate to The Alzheimer’s Foundation, visit this link.