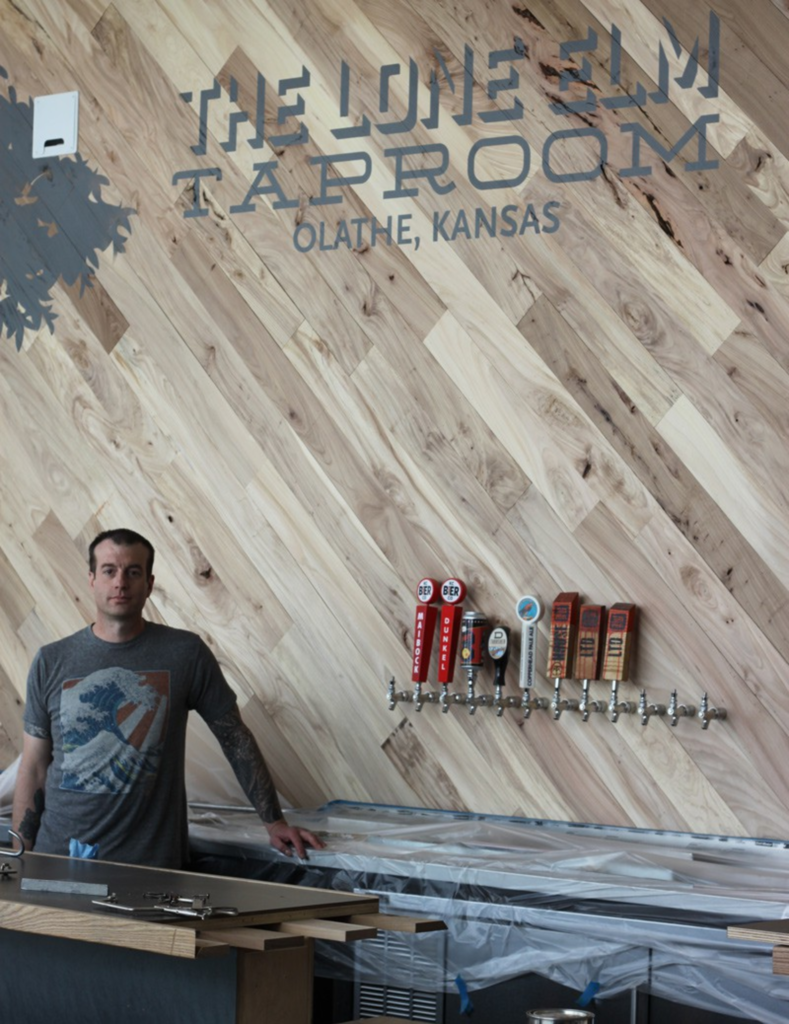 The taproom inside Whole Foods’ soon-to-open Olathe store isn’t quite finished. Saws whir. Nail guns fire metal into wood. But most of the 12 tap handles are in place, and the local kegs are on the way.

“I think the expectation was that Boulevard would be the bulk of our taps,” says Ben Rose, who works for Whole Foods’ regional office, in Boulder, Colorado, and has come to Kansas to help launch this third Johnson County location. “I really wanted to spread it out. I was really excited about Torn Label. KC Bier has a great niche and they understand the marketplace — they understand what they’re really good at, and they’re dialed.”

The Lone Elm Taproom is a finishing touch to the grocery store at 14615 West 119th Street, in Olathe. “The rest of the store is pretty well built-out,” Rose says. “The taproom we added in late, so the construction is behind a bit.”

Behind but close to completion and definitely on track for Wednesday’s grand opening. There’s seating for 40 people inside, and about 80-100 more on a patio designed to showcase live music. Two large-screen monitors will show Royals, Sporting and Chiefs games.

“It’s a small space in there, but we feel it’s a nice and intimate space,” Rose says. “Seasonally, this will be available to seat a lot more people.”

Whole Foods has about 200 taprooms throughout the country, but the Lone Elm is only the second in the Rocky Mountain region (the first was in Boise, Idaho), which includes Kansas.

“Of course, I’ve always been familiar with Boulevard,” he says. “That’s a benchmark brewery and has sort of been on the cutting edge of craft breweries for a long time.”

So getting Boulevard on tap was a no-brainer. But Rose also wanted to feature some of the newer operations from Kansas City’s brewery boom. Through word-of-mouth, he discovered KC Bier Co. and its German-style brews, and he toured its facility. He came away impressed. “That was another step toward opening up the door to what’s really going on here,” he says.

Then he heard about Torn Label.

“That one really set me on fire,” he says of the Crossroads production brewery. “That is the brewery that I’m really excited about personally. I think their beers are stellar. Those guys are really dialed in.”

It’s a list that Rose says will change “early and often.”

“As seasonal products become available, we want to be able to pull those in,” he adds. “Anything that’s unique or a one-off, we want to absolutely jump on-board with that. Anything that comes down the pipe that’s a cool item, we’ll jump on. We want to create a good selection. We want to represent different styles of beers, and we want to be focused seasonally on beers that are appropriate.”

Beyond what’s on tap, some 45 varieties of canned and bottled beer (including 750 ml bombers) will be for sale. The taproom will also have a couple of wine handles, featuring Amigoni and Somerset Ridge.

Rose says plans are in the works for classes on pairing food, especially cheese, with beer and wine. But he says there’s nothing snooty about the Lone Elm. Complex and challenging brews will be side-by-side with easy-drinking staples.