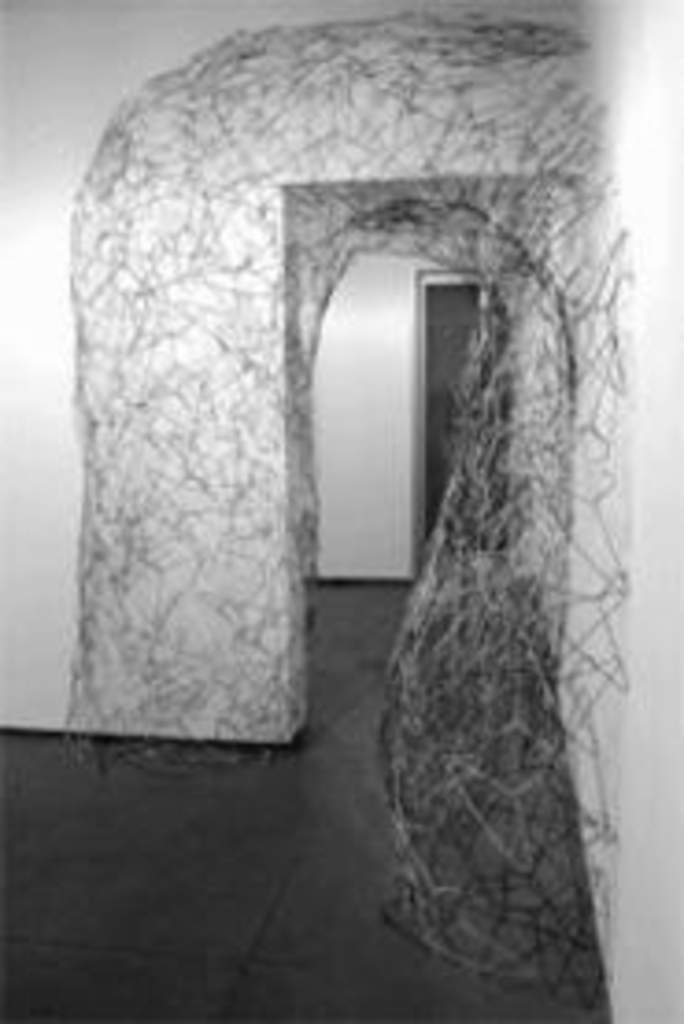 It was the best of times, it was the worst of times. It was just last month.

That was when a bunch of Kansas City artists went to New York City to put on a show called What’s the Matter With Kansas? Hosted by the Chelsea gallery Rare, this would be an attempt to show the city — one that has dismissed the entire Midwest as worthless and stupid — that something interesting, wonderful and strange has been brewing in these supposed backwoods. (After George W. Bush’s re-election, one of my New York friends referred to us as “gangrene,” suggesting that we be cut off and left alone with our bad taste, bad music and bad politics.) Curator Hesse McGraw went so far as to suggest, in the show’s promotional materials, that the interesting, the wonderful and the strange — also known as Kansas City art — spring directly from the environment. The art comes from a home on the range — a range that can get pretty jacked up, but a range we call home nonetheless.

McGraw couldn’t have picked a more compelling crew of artists. There was Eric von Robertson, the human force behind C.A.R.L. — the Center for the Advancement of Recreation and Leisure — who creates large, whimsical objects, then documents people figuring out how to have fun with them. (He has historically provided hammocks and straw hats for the enjoyment of gallerygoers.) Robertson makes fun out of nothing, batting away the stodgy and the serious like so many bouncy balls.

There was Miles Neidinger, who makes art materials of ordinary items such as wire hangers and reddish-brown coffee stirrers purchased in bulk. He seamlessly assembles them one piece at a time to form huge, cavernous structures that look a thousand times more beautiful and dreamy than the seemingly mundane junk he started with.

There was Jordan Nickel (who now lives in Chicago), who is known for his simple, streamlined stoner art, including a play on René Magritte’s “Ceci n’est pas Une Pipe,” which famously depicts a pipe with a caption instructing that “This Is Not a Pipe.” Nickel retorts with a bong titled “C’est Une Pipe” — “This Is a Pipe.” For What’s the Matter With Kansas? Nickel presented surveillance cameras installed in the shape of a peace sign, and wrenches were hung on the gallery wall to form a flower.

There was painter Jill Noone, who dots black canvases with imperfect clusters of glowing circles to show Midwestern cities as they appear from a distance. The cities, being small compared with the nothingness all around them, do not tower or overwhelm. They quietly invite, like hazy porch lights.

The New York Times recommended the show as a critic’s choice, and the turnout at the opening reception was impressive, with people gathered on the dock outside the building, drinking beer in retaliation against the heat.

Beyond the initial blurb, though, there hasn’t been much critical commentary about the show. We still don’t know for sure what New York thought of What’s the Matter With Kansas?

So I had two friends who were in New York swing by Rare. One, Peter Demos, is from Kansas City, but this weekend he will move to New York to pursue an MFA in painting, so he saw the show during an apartment-searching trip. The other, Eugene Jho, works for an architectural firm there; he has lived in the New York area all his life, most recently in what he calls a “crack-whore building,” where a homeless man recently sat on the stoop cleaning his toes with a pencil eraser. Jho contributed an installation piece to this year’s Dumbo Arts Festival, introducing karaoke with participants reading lines from ancient Greek plays inside a telephone booth instead of singing pop songs into a microphone on a stage. This fall, he’ll move away from New York to pursue his own MFA at the Glasgow School of Art.

This is not only a tale of two cities, then. It is a tale of two friends, two future MFA candidates, two talented motherfuckers whose perspectives you can bet I trust to fill this column.

Demos and his fiancée, fellow artist Heather Gutierrez, were in the middle of several days of subway-hopping. “We were in and out of the show pretty quick, just because of the whole rental thing,” he says, already speaking like a New Yorker.

Being familiar with all of the show’s artists, he was curious to see whether their work would look different in New York, on a trip that included a number of stops at Williamsburg galleries, in a space where the friendly faces he associates with the work would be nowhere in sight. “It really held up,” he says. “It looked the same out there, only more compressed.”

Jho echoes those sentiments. He was struck by how the show was consistent with others he sees there. In fact, Neidinger’s “Only the Necessities” really bowled him over. “It’s literally just tons of clothes hangers that have been linked together to form this curvy passageway inside the gallery. It’s really beautiful because they’re not just connected together. The connections are really smooth.”

But did anything about the show seem indigenous to Kansas City? “I thought the opposite,” Jho says. “I thought that, no, it surprisingly looked like a New York gallery show. There is a real sense of craft throughout, but a lot of artists sort of like that now, so it could fit into New York really nicely. When I saw that piece by Miles Neidinger, the first thing I thought of was Eva Hesse,” he adds, referring to a key figure in the 1960s minimalist movement. Hesse eschewed the polished, mass-produced look favored by her contemporaries and arranged sparse displays of ordinary objects in ways that made them look ever so slightly sexual.

And Jho made an interesting observation about what it must be like to create art in the Midwest. “I did notice that there was more exuberance and chance-taking, probably because people there make things without the pressure of the whole New York art establishment watching.”

This is good news. As curator of What’s the Matter With Kansas? McGraw could have picked art that would have been immediately recognizable as Midwestern. Alex MacLean’s aerial photography, for example, depicts the Kansas City area as seen from directly overhead. The Westport grid looks like unassembled little Legos sitting side by side, whereas southern Johnson County developments form networks of pointy rooftops. Meanwhile, railroad tracks look arterial, and roads leading away from developments resemble curling vines.

MacLean does beautiful work. But to put it in a New York show about art in Kansas City would be obvious.

The work in What’s the Matter With Kansas? is less clearly about this place, and it doesn’t refer to well-publicized aspects of life here. That Jordan Nickel’s wrench flower is probably influenced by the handy nature of our downtown art scene — where sculptors and construction workers lie down together — is something you’d have to live here to understand, and even then, it’s subtle.

Which is why it’s so important that the art stand on its own. It doesn’t rely on its connection to the Midwest to appear beautiful and compelling; it works in a New York gallery as art. Period.

But even if the results don’t reflect the difference we’d expect them to, Demos sees the way artists work in Kansas City as unique. “In a weird way, there’s become a little Kansas City collective,” he says. “I don’t think I would be the same artist without my influences from these people. Whether it’s apparent in my work or not, it’s there.”

Maybe that’s the exuberance Jho sensed in What’s the Matter With Kansas?